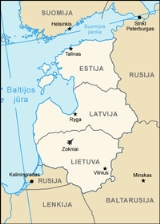 Encyclopedia
The Baltic air-policing mission is a NATO air defence Quick Reaction Alert
Scrambling (military)
In military aviation scrambling or a scramble is the act of quickly getting fighter aircraft airborne to intercept hostile aircraft.-Historical use:...
(QRA) in order to guard the airspace over the three Baltic states
Baltic states
The term Baltic states refers to the Baltic territories which gained independence from the Russian Empire in the wake of World War I: primarily the contiguous trio of Estonia, Latvia, Lithuania ; Finland also fell within the scope of the term after initially gaining independence in the 1920s.The...
Estonia
Estonia
Estonia , officially the Republic of Estonia , is a state in the Baltic region of Northern Europe. It is bordered to the north by the Gulf of Finland, to the west by the Baltic Sea, to the south by Latvia , and to the east by Lake Peipsi and the Russian Federation . Across the Baltic Sea lies...
, Latvia
Latvia
Latvia , officially the Republic of Latvia , is a country in the Baltic region of Northern Europe. It is bordered to the north by Estonia , to the south by Lithuania , to the east by the Russian Federation , to the southeast by Belarus and shares maritime borders to the west with Sweden...
and Lithuania
Lithuania
Lithuania , officially the Republic of Lithuania is a country in Northern Europe, the biggest of the three Baltic states. It is situated along the southeastern shore of the Baltic Sea, whereby to the west lie Sweden and Denmark...
. 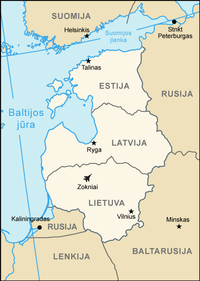 Within the Alliance, preserving airspace integrity is conducted as a collective task jointly and collectively using fighter aircraft for Air Policing. Air Policing is a purely defensive mission. It did not take the events of September 11, 2001 to make the public aware of the fundamental importance of Air Policing and the requirement to have air defence assets available at short notice ensuring safety and security of national and NATO airspace. Since the 1970s, NATO has established a comprehensive system of air surveillance and airspace management means, as well as Quick Reaction Alert assets for intercepts (QRA(I)) provided by its member nations. By means of radar sites, remote data transmission, control and reporting centres (CRCs) and Combined Air Operation Centres (CAOCs) the Alliance ensures constant surveillance and control if its assigned airspace 24 hours a day and 365 days a year. NATO exploits these facilities to react within seconds to air traffic incidents in the Allies’ airspace. This structure of weapon systems, control centres and procedures is referred to as the NATO Integrated Air Defence System (NATINADS). NATINADS has been and remains one cornerstone of Alliance solidarity and cohesion.The responsible Allied Air Headquarters are at Izmir,Turkey and Ramstein, Germany. The dividing line are the Alps. The Headquarters Allied Air Command Ramstein’s air area of responsibility is divided in two Air Policing Areas (APAs):
NATO members without their own Air Policing assets are assisted by other NATO members. Luxembourg
Luxembourg
Luxembourg , officially the Grand Duchy of Luxembourg , is a landlocked country in western Europe, bordered by Belgium, France, and Germany. It has two principal regions: the Oesling in the North as part of the Ardennes massif, and the Gutland in the south...
is covered by interceptors from Belgium
Belgium
Belgium , officially the Kingdom of Belgium, is a federal state in Western Europe. It is a founding member of the European Union and hosts the EU's headquarters, and those of several other major international organisations such as NATO.Belgium is also a member of, or affiliated to, many...
.

Since March 2004, when the Baltic States joined NATO, the 24/7 task to police the airspace of the Baltic States was conducted on three-month rotation from Lithuania's First Air Base in Zokniai/Šiauliai International Airport
Šiauliai International Airport
Šiauliai International Airport is located 7 km southeast of the city of Šiauliai, in northern Lithuania. It covers an area of 471 hectares.- History :...
, near the northern city of Šiauliai
Šiauliai
Šiauliai , is the fourth largest city in Lithuania, with a population of 133,900. It is the capital of Šiauliai County. Unofficially, the city is the capital of Northern Lithuania.-Names:...
. Starting with the Turkish deployment, rotations changed to a four month basis.
Usual deployments consist of four fighter aircraft
Fighter aircraft
A fighter aircraft is a military aircraft designed primarily for air-to-air combat with other aircraft, as opposed to a bomber, which is designed primarily to attack ground targets...
with between 50 and 100 support personnel.
To ensure Air Policing performance is conducted in a safe and professional way, adequate training was and still is required, as NATO member nations deploy their assets to Šiauliai Air Base, Lithuania, on a rotational basis. To standardize training across nations, Headquarters Allied Air Command Ramstein introduced a series of training events called Baltic Region Training Events (BRTEs) to capitalize on experienced aircrews deployed to Šiauliai and to offer superior training for Estonian, Latvian and Lithuanian air forces and control facilities.

30 August, 2011 a French Mirage collided with Lithuanian trainer jet L-39, which dived into a marsh.