Encyclopedia
Ballistic fingerprinting refers to a set of forensic techniques that rely on marks that firearm
Firearm
A firearm is a weapon that launches one, or many, projectile at high velocity through confined burning of a propellant. This subsonic burning process is technically known as deflagration, as opposed to supersonic combustion known as a detonation. In older firearms, the propellant was typically...
s leave on bullet
Bullet
A bullet is a projectile propelled by a firearm, sling, or air gun. Bullets do not normally contain explosives, but damage the intended target by impact and penetration...
s to match a bullet to the gun it was fired with. It is a subset of forensic ballistics
Ballistics
Ballistics is the science of mechanics that deals with the flight, behavior, and effects of projectiles, especially bullets, gravity bombs, rockets, or the like; the science or art of designing and accelerating projectiles so as to achieve a desired performance.A ballistic body is a body which is...
(the application of ballistics to legal questions) and internal ballistics
Internal ballistics
Internal ballistics, a subfield of ballistics, is the study of a projectile's behavior from the time its propellant's igniter is initiated until it exits the gun barrel...
(the study of events between the firing of a gun and the bullet leaving the barrel). 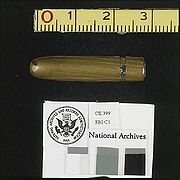 Rifling
Rifling
Rifling is the process of making helical grooves in the barrel of a gun or firearm, which imparts a spin to a projectile around its long axis...
, which first made an appearance in the 15th century, is the process of making grooves in gun barrels that imparts a spin to the projectile for increased accuracy and range. Bullets fired from rifled weapons acquire a distinct signature of grooves, scratches, and indentations which are of value for matching a fired projectile to a firearm.

The first firearms evidence identification can be traced back to England
England
England is a country that is part of the United Kingdom. It shares land borders with Scotland to the north and Wales to the west; the Irish Sea is to the north west, the Celtic Sea to the south west, with the North Sea to the east and the English Channel to the south separating it from continental...
in 1835 when the unique markings on a bullet taken from a victim were matched with a bullet mold belonging to the suspect. When confronted with the damning evidence, the suspect confessed to the crime. Alexandre Lacassagne
Alexandre Lacassagne
Alexandre Lacassagne was a French physician and criminologist who was a native of Cahors. He was the founder of the Lacassagne school of criminology, based in Lyon and influent from 1885 to 1914, and main rival to Lombroso's Italian school.- Biography :He studied at the military school in...
was the first scientist to try to match an individual bullet to a gun barrel.

Calvin Goddard, physician and ex-army officer, acquired data from all known gun manufacturers in order to develop a comprehensive database. With his partner, Charles Waite, he catalogued the results of test-firings from every type of handgun made by 12 manufacturers. Waite also invented the comparison microscope
Comparison microscope
A comparison microscope is a device used to analyze side-by-side specimens. It consists of two microscopes connected by an optical bridge, which results in a split view window enabling two separate objects to be viewed simultaneously...
. With this instrument, two bullets could be laid adjacent to one another for comparative examination.

In 1925 Goddard wrote an article for the Army Ordnance titled "Forensic Ballistics" in which he described the use of the comparison microscope
Comparison microscope
A comparison microscope is a device used to analyze side-by-side specimens. It consists of two microscopes connected by an optical bridge, which results in a split view window enabling two separate objects to be viewed simultaneously...
regarding firearms investigations. He is generally credited with the conception of the term "forensic ballistics," though he later admitted it to be an inadequate name for the science.

In 1929 the St. Valentine's Day Massacre
St. Valentine's Day massacre
The Saint Valentine's Day massacre is the name given to the 1929 murder of 7 mob associates as part of a prohibition era conflict between two powerful criminal gangs in Chicago: the South Side Italian gang led by Al Capone and the North Side Irish gang led by Bugs Moran. Former members of the...
led to the opening of the first independent scientific crime detection laboratory in the United States
United States
The United States of America is a federal constitutional republic comprising fifty states and a federal district...
.

Ballistic fingerprinting techniques are based on the principle that all firearms have inevitable variations due to marks left by the machining process, leaving shallow impressions in the metal which are rarely completely polished out. Also, normal wear and tear from use can cause each firearm to acquire distinct characteristics over time.

The simplest considerations are the gross differences. A 10 mm bullet, for example, could not have been fired from a 9 mm barrel.

When a bullet is fired through a rifled barrel, the raised and lowered spirals of the rifling
Rifling
Rifling is the process of making helical grooves in the barrel of a gun or firearm, which imparts a spin to a projectile around its long axis...
etch fine grooves called "striations" into the bullet. These can be matched with the barrel through which the bullet was fired. Examiners distinguish between striations common to all guns of a particular type ("class characteristics") and those unique to a particular gun ("individual characteristics").

The class characteristics depend upon the type of rifling
Rifling
Rifling is the process of making helical grooves in the barrel of a gun or firearm, which imparts a spin to a projectile around its long axis...
in the barrel, which varies among manufacturers and models in number and shape of the grooves, twist rate, and direction. Colt
Colt's Manufacturing Company
Colt's Manufacturing Company is a United States firearms manufacturer, whose first predecessor corporation was founded in 1836 by Sam Colt. Colt is best known for the engineering, production, and marketing of firearms over the later half of the 19th and the 20th century...
, for example, traditionally uses a left-hand twist, while Smith and Wesson uses a right hand twist; a current production M16 rifle
M16 rifle
The M16 is the United States military designation for the AR-15 rifle adapted for both semi-automatic and full-automatic fire. Colt purchased the rights to the AR-15 from ArmaLite, and currently uses that designation only for semi-automatic versions of the rifle. The M16 fires the 5.56×45mm NATO...
uses a 1 in 7 inch twist, while most civilian AR-15
AR-15
The AR-15 is a lightweight, 5.56 mm, air-cooled, gas-operated, magazine-fed semi-automatic rifle, with a rotating-lock bolt, actuated by direct impingement gas operation. It is manufactured with the extensive use of aluminum alloys and synthetic materials....
s and the current Mini-14
Mini-14
The Mini-14, Mini Thirty, and Mini-6.8 are small, lightweight semi-automatic carbines manufactured by the U.S. firearms company Sturm, Ruger. The Mini-14 non-target versions can fire both the .223 Remington cartridge and the similar military 5.56x45mm cartridge. The target model Mini-14 rifles are...
use a 1 in 9 inch twist. Marlin Firearms
Marlin Firearms
Marlin Firearms Co., formerly of North Haven, Connecticut, is a manufacturer of high power, center fire, lever action, and .22 caliber rimfire rifles. In the past, the company made shotguns, derringers and revolvers...
use a distinctive 16-groove Micro-Groove rifling in many of their firearms, while the M1903 Springfield rifle had two, four, or six grooves depending on the manufacturer. Polygonal rifling
Polygonal rifling
Polygonal rifling is a type of gun barrel rifling where the traditional lands and grooves are replaced by "hills and valleys" in a rounded polygonal pattern, usually a hexagon or octagon....
may leave striations that are difficult to match to a particular barrel.

Individual characteristics are caused by imperfections in the rifling process and tools, but also by the wear and tear caused by regular use, and can therefore change over time. Criminals or those concerned with government intrusion in privacy sometimes attempt to alter a gun's individual characteristics by changing or shortening the barrel, or by rubbing its interior with a steel brush.

Ballistic fingerprinting of bullets does not work with firearms such as shotgun
Shotgun
A shotgun is a firearm that is usually designed to be fired from the shoulder, which uses the energy of a fixed shell to fire a number of small spherical pellets called shot, or a solid projectile called a slug...
s that fire shot-containing cartridges. In many cases the shot rides inside a plastic sleeve that prevents it from ever touching the barrel, and even in cases where the shot does touch the barrel, the random movement of the shot down the barrel will not leave any consistent marks. But shotgun cases can still be examined for firing pin marks and the like.

A California
California
California is a state located on the West Coast of the United States. It is by far the most populous U.S. state, and the third-largest by land area...
Department of Justice survey, using 742 guns used by the California Highway Patrol as a test bed, showed very poor results; even with such a limited database, less than 70% of cases of the same make as the "fingerprint" case yielded the correct gun in the top 15 matches; when a different make of ammunition was used, the success rate dropped to less than 40%. 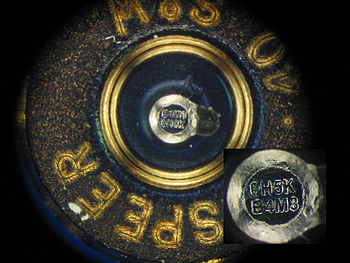 There have been several proposals for the mandated marking of bullets to aid in ballistic fingerprinting, and some jurisdictions have passed legislation to that effect. California, for instance, passed a bill AB 1471
AB 1471
AB 1471 or AB 1471 Crime Gun Identification Act of 2007 is legislation passed by the California State Senate on September 6, 2007 and then by the California State Assembly on September 10, 2007, with votes of 21–17 and 43–29 respectively....
which requires all new models of handguns to be equipped with microstamping
Firearm microstamping
Firearm microstamping, ballistic imprinting and ballistic engraving are all names given to a controversial technology that has been developed with the goal of aiding in ballistics identification; it involves the use of laser technology to engrave a microscopic marking onto the tip of the firing pin...
technology by 2010.

Several techniques have been proposed: