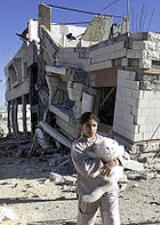 Encyclopedia
Balata Camp is a Palestinian
Palestinian people
The Palestinian people, also referred to as Palestinians or Palestinian Arabs , are an Arabic-speaking people with origins in Palestine. Despite various wars and exoduses, roughly one third of the world's Palestinian population continues to reside in the area encompassing the West Bank, the Gaza...
refugee camp
Refugee camp
A refugee camp is a temporary settlement built to receive refugees. Hundreds of thousands of people may live in any one single camp. Usually they are built and run by a government, the United Nations, or international organizations, or NGOs.Refugee camps are generally set up in an impromptu...
established in the northern West Bank
West Bank
The West Bank ) of the Jordan River is the landlocked geographical eastern part of the Palestinian territories located in Western Asia. To the west, north, and south, the West Bank shares borders with the state of Israel. To the east, across the Jordan River, lies the Hashemite Kingdom of Jordan...
in 1950, adjacent to the city of Nablus
Nablus
Nablus is a Palestinian city in the northern West Bank, approximately north of Jerusalem, with a population of 126,132. Located in a strategic position between Mount Ebal and Mount Gerizim, it is the capital of the Nablus Governorate and a Palestinian commercial and cultural center.Founded by the...
. It is the largest refugee camp in the West Bank. Balata Camp is densely populated with 30,000 residents in an area of 0.25 square kilometers.

In 1950, the UN gave the refugees from the Jaffa
Jaffa
Jaffa is an ancient port city believed to be one of the oldest in the world. Jaffa was incorporated with Tel Aviv creating the city of Tel Aviv-Yafo, Israel. Jaffa is famous for its association with the biblical story of the prophet Jonah.-Etymology:...
area temporary housing. These people initially refused the UN's offers, stating their eagerness to return to their homes. They desired no sense of permanence. After two years, they accepted the offer and settled at Balata. In 1956, the Jaffa refugees desired more permanent housing. After the border with the State of Israel was sealed, the refugees moved into concrete housing that replaced the original tents.

In the 1980s and 1990s, Balata residents played a leading role in the uprisings known as the First Intifada
First Intifada
The First Intifada was a Palestinian uprising against the Israeli occupation of the Palestinian Territories. The uprising began in the Jabalia refugee camp and quickly spread throughout Gaza, the West Bank and East Jerusalem....
and the Second Intifada. In November 2007, Palestinian National Authority
Palestinian National Authority
The Palestinian Authority is the administrative organization established to govern parts of the West Bank and Gaza Strip...
police officers climbed rooftops in Balata and engaged in gun battles with militants of the Al-Aqsa Martyrs' Brigades
Al-Aqsa Martyrs' Brigades
The al-Aqsa Martyrs' Brigades is a coalition of Palestinian nationalist militias in the West Bank. The group's name refers to the al-Aqsa Mosque in Jerusalem...
who had turned the camp into a military stronghold. Five residents and a policeman were wounded in the shooting.