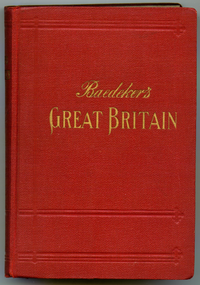 Verlag Karl Baedeker is a Germany-based publisher and pioneer in the business of worldwide travel guides. The guides, often referred as simply "Baedekers" (sometimes the term is used about similar works from other publishers, or in reference to any kind of guide), contain important introductions, descriptions of buildings, of museum collections, etc., written by the best specialists, and are frequently revised in order to be up to date. For the convenience of travellers, they are in a handy format and in small print.

Founded by Karl Baedeker
Karl Baedeker
Karl Baedeker was a German publisher whose company Baedeker set the standard for authoritative guidebooks for tourists.- Biography :...
in 1827, the company relocated in 1872 to Leipzig
Leipzig
Leipzig Leipzig has always been a trade city, situated during the time of the Holy Roman Empire at the intersection of the Via Regia and Via Imperii, two important trade routes. At one time, Leipzig was one of the major European centres of learning and culture in fields such as music and publishing...
under his third son Fritz Baedeker, who took over control of the company following the death and disablement of his older brothers. With the widespread advent of mechanical transportation, it was Fritz who managed an explosive growth in the line of travel guides, also producing international guides. Prior to World War I, Baedeker's guides were famous enough that baedekering became an English-language term for the process of travelling a country for the purpose of writing a travel guide or travelogue about it.

Between April and June 1942, Germany launched a series of air attacks against English cities that had little strategic importance, but that were picturesque and historically important. This was called the "Baedeker Blitz
Baedeker Blitz
The Baedeker Blitz or Baedeker raids were a series of Vergeltungsangriffe by the German air force on English cities in response to the bombing of the erstwhile Hanseatic League city of Lübeck during the night from 28 to 29 March 1942 during World War II.-Background:Lübeck was bombed on the night...
" by the British as it was believed the towns had been targeted because of their three stars in the guidebook. The German raids followed the Royal Air Force
Royal Air Force
The Royal Air Force is the aerial warfare service branch of the British Armed Forces. Formed on 1 April 1918, it is the oldest independent air force in the world...
's bombing of the historic, German city of Lübeck
Lübeck
The Hanseatic City of Lübeck is the second-largest city in Schleswig-Holstein, in northern Germany, and one of the major ports of Germany. It was for several centuries the "capital" of the Hanseatic League and, because of its Brick Gothic architectural heritage, is listed by UNESCO as a World...
in March 1942, which had caused widespread destruction (see Bombing of Lübeck in World War II
Bombing of Lübeck in World War II
thumb|Joseph Krautwald's The MotherDuring World War II, the city of Lübeck was the first German city to be attacked in substantial numbers by the Royal Air Force. The attack on the night of 28 March 1942 created a firestorm that caused severe damage to the historic centre, the bombs destroying...
).

During the years of World War II
World War II
World War II, or the Second World War , was a global conflict lasting from 1939 to 1945, involving most of the world's nations—including all of the great powers—eventually forming two opposing military alliances: the Allies and the Axis...
, the Nazi government commissioned publication of several travel guides of occupied regions of Europe. Among these were travel guides of Generalgouvernement (General Government
General Government
The General Government was an area of Second Republic of Poland under Nazi German rule during World War II; designated as a separate region of the Third Reich between 1939–1945...
, part of occupied Poland), and the Alsace
Alsace
Alsace is the fifth-smallest of the 27 regions of France in land area , and the smallest in metropolitan France. It is also the seventh-most densely populated region in France and third most densely populated region in metropolitan France, with ca. 220 inhabitants per km²...
region of occupied France annexed by the German Reich.

The Baedeker company's premises and files perished in a December 1943 air raid, but Baedeker's great grandson revived the company, restarting publication of tourist guides in 1948.

The publishing house joined with the insurance company Allianz Group in 1978, and many of the guides have been called "Baedeker Allianz Travel Guides" (Baedeker Allianz Reiseführer) since then. However, as of 2001, 64 titles in English and 24 in French do not carry the Allianz logo; Prentice Hall
Prentice Hall
Prentice Hall is a major educational publisher. It is an imprint of Pearson Education, Inc., based in Upper Saddle River, New Jersey, USA. Prentice Hall publishes print and digital content for the 6-12 and higher-education market. Prentice Hall distributes its technical titles through the Safari...
and Macmillan
Macmillan Publishers
Macmillan Publishers Ltd, also known as The Macmillan Group, is a privately held international publishing company owned by Georg von Holtzbrinck Publishing Group. It has offices in 41 countries worldwide and operates in more than thirty others.-History:...
have published the English titles.

For 40 years (1878–1918) the Scottish brothers James and Findlay Muirhead published the English-language Baedekers. In 1918, they established the ongoing Blue Guides
Blue Guides
The Blue Guides are a series of highly detailed and authoritative travel guidebooks focusing almost exclusively on art and architecture along with the history and context necessary to understand them...
as heir to the great 19th century Baedeker tradition.

Internet sites regularly list old Baedeker guidebooks for sale. The guides of most historical and cultural interest span the period prior to World War II; describing Europe, the United States, Egypt
Egypt
Egypt , officially the Arab Republic of Egypt, Arabic: , is a country mainly in North Africa, with the Sinai Peninsula forming a land bridge in Southwest Asia. Egypt is thus a transcontinental country, and a major power in Africa, the Mediterranean Basin, the Middle East and the Muslim world...
, Canada, India and Russia in the context of the day.