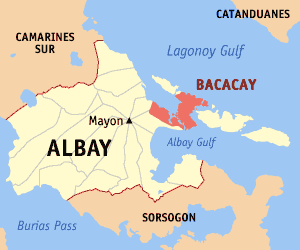 Bacacay is a 2nd class municipality in the province of Albay, Philippines
Philippines
The Philippines , officially known as the Republic of the Philippines , is a country in Southeast Asia in the western Pacific Ocean. To its north across the Luzon Strait lies Taiwan. West across the South China Sea sits Vietnam...
. According to the 2007 census, it has a population of 61,574 people in 11,154 households.

Bacacay is a tourist place with caves and beaches. The town is visited most especially at summer due to many beautiful beaches. In fact, this is where the Kuron-Kuron Beach Resort, Viento de Mar Beach Resort, VRT (Tanchuling) Beach Resort, Michaelangelus Beach Resort, and the Misibis Beachfront Resort.

Bacacay is politically subdivided into 58 barangay
Barangay
A barangay is the smallest administrative division in the Philippines and is the native Filipino term for a village, district or ward...
s.

For more information read the LGU Profile of Bacacay, Albay