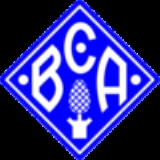 Encyclopedia
BC Augsburg was a German football club
Football in Germany
Association football is the most popular sport in Germany. The German Football Association is the sport's national governing body, with 6.6 million members organized in over 26,000 football clubs. There is a league system, with the 1. and 2. Bundesliga on top, and the winner of the first...
based in Augsburg
Augsburg
Augsburg is a city in the south-west of Bavaria, Germany. It is a university town and home of the Regierungsbezirk Schwaben and the Bezirk Schwaben. Augsburg is an urban district and home to the institutions of the Landkreis Augsburg. It is, as of 2008, the third-largest city in Bavaria with a...
, Bavaria
Bavaria
Bavaria, formally the Free State of Bavaria is a state of Germany, located in the southeast of Germany. With an area of , it is the largest state by area, forming almost 20% of the total land area of Germany...
. The team was founded as Fußball-Club Allemannia Augsburg in 1907 and played as Ballspiel-Club Augsburg from 1921 to 1969. Facing imminent financial collapse, BC merged with the football side of TSV Schwaben Augsburg
TSV Schwaben Augsburg
TSV Schwaben Augsburg is a German football club which is part of a larger sports association whose origins go back to the 1847 formation of the gymnastics club Turnverein Augsburg...
in July 1969 to form FC Augsburg
FC Augsburg
FC Augsburg is a German football club based in Augsburg, Bavaria. The team was founded as Fußball-Klub Alemania Augsburg in 1907 and played as BC Augsburg from 1921 to 1969....
. The union was short-lived and Schwaben re-established its own football department the following year. FCA remains active today and carries on the tradition of the original side.

On 11 May 1909, BC joined the gymnastics club Turnverein 1871 Oberhausen as that association's football department, based in the suburb of Oberhausen
Augsburg-Oberhausen
Oberhausen is one of the seventeen Planungsräume of Augsburg, Bavaria, Germany. Located in the northwestern portion of the city, it is home to 23,510 residents as of January 1, 2006, making it one of the larger planning districts in terms of population...
. Oberhausen merged with Turnverein Augsburg II to create Turn- und Sportverein 1871 Augsburg with the footballers playing as Ballspielclub im TSV 1847. A year later the footballers went their own way as a separate club and first adopted the name BC Augsburg.

In the 1930s the club shared unions with Sportverein Augsburg and Turn- und Sportverein Stadtbach. SV was established in 1888 as Turnverein Augsburg-Kriegshaber. A football department was formed within that club in 1916, became independent in 1924, and joined BC in 1935. TSV was formed in 1896 as Turnverein Stadtbach and its footballers went their own way as Fußball-Club Stadtbach in August 1919. In 1930 they were renamed VfL Teutonia Augsburg and on 15 June 1932 the association was joined by the athletics department of BC Augsburg. Two years later VfL rejoined its parent club to create TSV 1896 Stadtbach, which in its turn became part of BC in 1938.

German football was reorganized in 1933 under the Third Reich into 16 top-flight divisions known as Gauligen
Gauliga
A Gauliga was the highest level of play in German football from 1934-45. The leagues were introduced in 1933, after the Nazi takeover of power by the Sports office of the Third Reich.-Name:...
. BC finished second in regional second division that following year and beat FC Memmingen
FC Memmingen
FC Memmingen is a German association football club based in Memmingen, Bavaria.-Overview:The team was formed on 30 May 1907 as the football department of the gymnastics club Memminger Turnvereins 1859 and became independent in the fall of that year...
3:2 in a promotion playoff to win its way into the Gauliga Bayern
Gauliga Bayern
The Gauliga Bayern was the highest football league in the German state of Bavaria from 1933 to 1945. Shortly after the formation of the league, the Nazis reorganised the administrative regions in Germany, and the five Gaue Bayreuth, Munich-Upper Bavaria, Swabia, Main Franconia and Franconia de...
for the 1934–35 season. Over the next several seasons they played there as a lower to mid-table side with their best results coming as second places finishes in 1940 and 1943. During this period the team made two appearances (1935, 1943) in play for the Tschammer-Pokal, predecessor of today's DFB-Pokal
DFB-Pokal
The DFB-Pokal or DFB Cup is a German knockout football cup competition held annually. 64 teams participate in the competition, including all clubs from the Bundesliga and the 2nd Bundesliga. It is considered the second most important national title in German football after the Bundesliga...
(German Cup), and were put out in the early going on both occasions.

World War II caused player shortages and forced play to become more local in character. In 1943 the Gauliga Bayern became the Gauliga Südbayern and BC joined Post-SG Augsburg to form the wartime side Kriegspielgeminde Augsburg. This club earned another second place result in 1943–44 before conflict overtook the area and play ended nearly half way into the 1944–45 season.

Following the war occupying Allied authorities order the dissolution of most organizations in the country, including sports and football clubs. BC was remade, but the former memberships of SV and TV left to form TSV Kriegshaber in 1946.

BC Augsburg took up play in the first division Oberliga Süd in 1945, but were sent down after just two seasons. The bounced back with a Landesliga Bayern
Landesliga Bayern
In the Bavarian football league system, the Landesliga Bayern is the second hightest level, below the Fußball-Bayernliga and organised in three regional divisions. The current Landesligas were formed in 1963, when the Fußball-Bundesliga was established...
(II) title in 1948 and then beat 1. FC Bamberg
1. FC Eintracht Bamberg
FC Eintracht Bamberg is a German association football club from the city of Bamberg, Bavaria. The footballers are part of a sports club formed on 1 April 2006 out of the union of 1. FC Bamberg and TSV Eintracht Bamberg...
(4:1, 1:1) in promotion round play. The Oberliga Süddeutschland became the Oberliga Süd in 1950, and BC spent 10 of the next 13 seasons in top flight play there, but struggled as a lower table side. After the 1963 formation of the Bundesliga, Germany's first national professional circuit, the Augsburg club became part of the second tier Regionalliga Süd. In 1965, BC captured the division title in the Amateurliga Bayern (III) and advanced to the semi finals of the national amateur championship. Through the 60s the club bounced back and forth between second and third division play until financial problems led to 1969 merger with TSV Schwaben Augsburg that created current day club FC Augsburg.

While the FC Augsburg holds up the traditions of the BCA, there is another club claiming some of the heritage of the club, the BC Augsburg-Oberhausen. Based in the Oberhausen suburb of Augsburg where once the BCA hailed from, the club plays its home games at the Sportanlage Nord, where the old BCA also was based.

The BCA-O was formed in 1970, a year after the old BCA disappeared, as Sportfreunde Oberhausen, but changed its name to BC Augsburg-Oberhausen in 1981. Its logo is very similar to the old BCA logo, too.