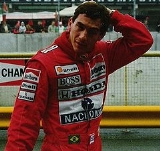 Overview
Ayrton Senna da Silva was a Brazil
Brazil
Brazil , officially the Federative Republic of Brazil , is the largest country in South America. It is the world's fifth largest country, both by geographical area and by population with over 192 million people...
ian racing driver. A three-time Formula One
Formula One
Formula One, also known as Formula 1 or F1 and referred to officially as the FIA Formula One World Championship, is the highest class of single seater auto racing sanctioned by the Fédération Internationale de l'Automobile . The "formula" designation in the name refers to a set of rules with which...
world champion, he is widely regarded as one of the greatest F1 drivers of all time. He was killed in a crash
Death of Ayrton Senna
The death of three-time Formula One World Champion Ayrton Senna on May 1, 1994, occurred as a result of his car crashing into a concrete barrier while he was leading the 1994 San Marino Grand Prix at the Autodromo Enzo e Dino Ferrari in Italy. The previous day, Roland Ratzenberger had been killed...
at Tamburello corner while leading the 1994 San Marino Grand Prix
1994 San Marino Grand Prix
The 1994 San Marino Grand Prix was a Formula One motor race held on May 1, 1994 at the Autodromo Enzo e Dino Ferrari, Imola, Italy. It was the third race of the 1994 Formula One season...
and is the last driver to die at the wheel of a Formula One car.

Senna began his motorsport career in karting, moving up to open-wheel
Open wheel car
Open-wheel car, formula car, or often single-seater car in British English, describes cars with the wheels outside the car's main body and, in most cases, one seat. Open-wheel cars contrast with street cars, sports cars, stock cars, and touring cars, which have their wheels below the body or fenders...
racing in 1981 and winning the British Formula 3
British Formula Three Championship
The British Formula Three Championship is an international motor racing series that takes place primarily in the United Kingdom with a small number of events in mainland Europe. It is a junior-level feeder formula that uses small single seater Formula Three chassis. Its current official title is...
championship in 1983.