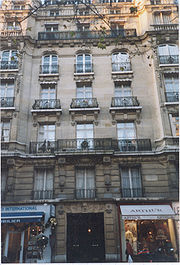 Avenue Victor-Hugo is an avenue in the 16th arrondissement of Paris
Paris
Paris is the capital and largest city in France, situated on the river Seine, in northern France, at the heart of the Île-de-France region...
. It begins at place Charles de Gaulle (also known as the Étoile) and ends at place Tattegrain (becoming avenue Henri-Martin). It is one of the twelve avenues beginning at the Étoile, and the second longest of the twelve, after the avenue des Champs-Élysées. Its junction with the Étoile is between those of the avenue Foch
Avenue Foch
Avenue Foch is a street in Paris, France, named after Ferdinand Foch in 1929. It was previously named Avenue du Bois de Boulogne. It is one of the most prestigious streets in Paris, and one of the most expensive addresses in the world, home to many grand palaces, including ones belonging to the...
and avenue Kléber
Avenue Kléber
Avenue Kleber is one of the avenues in Paris. It is one of the twelve avenues leading out of the Arc De Triomphe. It was named after Jean Baptiste Kléber, a French general during the French Revolutionary Wars....
. It runs along the colline de Chaillot. Halfway along it is place Victor-Hugo and the Line 2 Metro station Victor Hugo
Victor Hugo (Paris Metro)
Victor Hugo is a station on Paris Métro Line 2. It is named after the author Victor Hugo.When first opened in 1900 as part of line 2 Nord, the platforms were built on the tight bend between Avenue Victor Hugo and Avenue Bugeaud. However, when new rolling stocks were introduced in 1931, the curve of...
. Originally named avenue de Saint-Cloud
Saint-Cloud
Saint-Cloud is a commune in the western suburbs of Paris, France. It is located from the centre of Paris.Like other communes of the Hauts-de-Seine such as Marnes-la-Coquette, Neuilly-sur-Seine or Vaucresson, Saint-Cloud is one of the wealthiest cities in France, ranked 22nd out of the 36500 in...
, it was renamed avenue d' during the Second French Empire
Second French Empire
The Second French Empire or French Empire was the Imperial Bonapartist regime of Napoleon III from 1852 to 1870, between the Second Republic and the Third Republic, in France.-Rule of Napoleon III:...
then after its resident Victor Hugo
Victor Hugo
Victor-Marie Hugo was a Frenchpoet, playwright, novelist, essayist, visual artist, statesman, human rights activist and exponent of the Romantic movement in France....
in 1881. Crossing the whole northern part of the 16th arrondissement, over 1.825km from the Étoile to the Muette, it is an average of 36m wide (its first part, between the Étoile and the place Victor-Hugo, is wider than the second part, between place Victor Hugo and place Tattegrain). Planted with trees and decorated with a statue of its namesake at the junction with avenue Henri-Martin
Avenue Henri-Martin
Avenue Henri-Martin is an avenue in the 16th arrondissement of Paris, named after the French historian Henri Martin , onetime mayor of the 16th arrondissement....
, it is one of the most prestigious avenues in Paris.

It includes several buildings by Pierre Humbert
Pierre Humbert
Pierre Humbert was a French architect born in 1848 to a noble French family.Humbert built many buildings and "hôtels particuliers" in Paris and other European cities, such as Brussels for the aristocracy and the upper class of the time, such a the prince of Caraman-Chimay, the duke des Cars or...
, such as numbers 122 and 167 (the latter built in 1911 for Humbert's family). Humbert also built number 124, on the site of the hôtel particulier
Hôtel particulier
In French contexts an hôtel particulier is an urban "private house" of a grand sort. Whereas an ordinary maison was built as part of a row, sharing party walls with the houses on either side and directly fronting on a street, an hôtel particulier was often free-standing, and by the 18th century it...
where Victor Hugo
Victor Hugo
Victor-Marie Hugo was a Frenchpoet, playwright, novelist, essayist, visual artist, statesman, human rights activist and exponent of the Romantic movement in France....
spent his last days (having as his address "Mr Victor Hugo, In his avenue, in Paris"). The Avenue was renamed after Hugo on 28 February 1881 (the day after his 79th birthday). The 1907 building's magnificent façade won several prizes and includes a sculpture of Hugo's face by Fonquergne. The Haiti
Haiti
Haiti , officially the Republic of Haiti , is a Caribbean country. It occupies the western, smaller portion of the island of Hispaniola, in the Greater Antillean archipelago, which it shares with the Dominican Republic. Ayiti was the indigenous Taíno or Amerindian name for the island...
an president Lysius Salomon
Lysius Salomon
Lysius Salomon was the President of Haiti from . Salomon is best remembered for instituting Haiti's first postal system, and his lively enthusiasm to modernize the country.....
died at number 3 on 19 October 1888.
The source of this article is wikipedia, the free encyclopedia.  The text of this article is licensed under the GFDL.