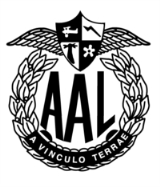 Encyclopedia
The Australian Air League (AAL) is a not-for-profit, civilian operated aviation
Aviation
Aviation is the design, development, production, operation, and use of aircraft, especially heavier-than-air aircraft. Aviation is derived from avis, the Latin word for bird.-History:...
youth organisation in Australia. Its objective is to encourage the spirit of aviation and air-mindedness in the youth of Australia. The Australian Air League receives no money or assistance of any government department and is entirely self-funded. Its Latin
Latin
Latin is an Italic language originally spoken in Latium and Ancient Rome. It, along with most European languages, is a descendant of the ancient Proto-Indo-European language. Although it is considered a dead language, a number of scholars and members of the Christian clergy speak it fluently, and...
motto is A Vinculo Terrae (Free From the Bonds of The Earth). The official patrons of the Australian Air League are Australian Governor General Quentin Bryce
Quentin Bryce
Quentin Bryce, AC, CVO is the 25th and current Governor-General of Australia and former Governor of Queensland....
and aviation journalist Jeff Watson.

Mr. George Robey was an Australian soldier who distinguished himself as an original ANZAC
Australian and New Zealand Army Corps
The Australian and New Zealand Army Corps was a First World War army corps of the Mediterranean Expeditionary Force that was formed in Egypt in 1915 and operated during the Battle of Gallipoli. General William Birdwood commanded the corps, which comprised troops from the First Australian Imperial...
. He won a Distinguished Conduct Medal on 25 April 1915 at the Gallipoli
Gallipoli
The Gallipoli peninsula is located in Turkish Thrace , the European part of Turkey, with the Aegean Sea to the west and the Dardanelles straits to the east. Gallipoli derives its name from the Greek "Καλλίπολις" , meaning "Beautiful City"...
landing. Mr. Robey was still a soldier, in the Citizen Military Forces when in 1927 he went to Canberra
Canberra
Canberra is the capital city of Australia. With a population of over 345,000, it is Australia's largest inland city and the eighth-largest city overall. The city is located at the northern end of the Australian Capital Territory , south-west of Sydney, and north-east of Melbourne...
to assist in the Ceremonial Opening of Parliament House
Parliament House, Canberra
Parliament House is the meeting facility of the Parliament of Australia located in Canberra, the capital of Australia. The building was designed by Mitchell/Giurgola Architects and opened on 1988 by Elizabeth II, Queen of Australia...
.

He brought back a toy wooden aeroplane for his son Keith that sparked an interest in aviation that inspired his son and that inspiration has lasted until the present day.

Keith Robey through his career has been a senior executive of one of Australia's largest general aviation companies. Keith has also been known as a well-respected aviation feature writer for Aircraft magazine, specialising in flight testing of aircraft.

The gift of the toy wooden aeroplane also sparked off the Australian Air League when five years later Keith complained of the lack of a youth organisation specialising in aviation.

His father George Robey and other concerned adults formed the Air Mindedness Development League and on 18 July 1934 Keith became enrolled as the first Cadet member. Not long after that the name was changed to the Australian Air League.

The first training Squadron opened at Manly
Manly, New South Wales
Manly is a suburb of northern Sydney, in the state of New South Wales, Australia. Manly is located 17 kilometres north-east of the Sydney central business district and is the administrative centre of the local government area of Manly Council, in the Northern Beaches region.-History:Manly was named...
, New South Wales
New South Wales
New South Wales is a state of :Australia, located in the east of the country. It is bordered by Queensland, Victoria and South Australia to the north, south and west respectively. To the east, the state is bordered by the Tasman Sea, which forms part of the Pacific Ocean. New South Wales...
on 17 January 1935 with 30 Cadets aged between 14 and 23 years. The first girls Squadron opened in 1944. The Correspondence Wing commenced in 1941. By 1942, 26,000 boys had been trained in aviation and 125 Squadrons operated in three states.

World War II took its toll as many of the Officers went into the services and at the end of hostilities, felt that they had experienced more than enough of wearing uniforms and discipline and hence many Squadrons closed.

Today the Australian Air League Inc. is an independent organisation and is not associated with, or sponsored by, any religious, military or other organisation. It is completely self-governing and self-supporting.

As a not for profit organisation, the Australian Air League relies on the help of a network of volunteers to carry out the various tasks which need to be fulfilled in order for the organisation to exist.

Coming from a wide range of backgrounds, these volunteers bring a variety of different skills to the League and contribute by joining the League as either an associate or League member, from where then can play a vital role in the operation of various levels of the league.

Associate membership provides a way for adults to join as non-uniformed, but financial, members of the League. Associate members are eligible to serve on the Squadron 'Branch Committee' from where they can directly assist the squadron by helping to keep track of the Squadrons finances and co-ordinating fund-raising activities.

Associate members are also eligible to participate in most functions and activities that are open to uniformed members.

Alternatively an adult may wish to join the League as an Officer. Such people are inducted into the League's Trainee Officer Programme, where they are given the rank of Trainee Officer and taken through a series of courses covering the day-to-day operations of a squadron, the expectations they will face, and correct procedure for handling different situations.

Upon completing the course the new member is awarded the rank of Second Officer and is attached to a unit, usually the squadron in their local area.

The Australian Air League has an internal rank structure for all uniformed members which is replicated from various organisations including military forces, police forces and Commercial aviation organisations.

The ranks are divided into three categories. The first are the Cadet ranks (referred to as N.C.O. ranks). These ranks are awarded to members of a Squadron, aged under 18 years, who have displayed, amongst other things, excellent leadership abilities, discipline and determination. These promotions are recommended by the Officer Commanding Squadron.

In the second category there are supernumery ranks. These are ranks held by members who do not fit into the Officer or Cadet ranking system. Ranks in this category are held by uniformed adult members.

In the third category are the Officer ranks. These are ranks are awarded to uniformed adult members of the League based upon their performance and appointment within their respective unit. These promotions are recommended by the officer's immediate superior.

The ranks an individual member holds is signified by either a series chevrons worn on both sleeves for N.C.O. ranks, or by a series of blue, silver or gold stripes worn on the eppaulettes for supernumerary and officer ranks. An absence of any rank insignia indicates a rank of "Cadet".

The term "Cadet" refers to a member who is under the age of 18 and/or holds one of the NCO ranks.
Upon turning the age of 16 a Cadet becomes a Senior Cadet and wears dark blue epaulettes.

A Flight consists of 3 Sections in formation under the command of a Sergeant, making a total of 19 members.

The first version consists of three flags, the State, National and Squadron flag. The second version may only consist of the Squadron or unit flag.

Wing, Group and Federal Flag Parties may only take the second form.

The ranks of the members in a Squadron Flag party must satisfy the following criteria:

Several Squadrons, Wings and Groups throughout the Australian Air League also have marching bands, made up of Cadets and Officers with an NCO in charge who is the Drum Major. The Drum Major is equivalent in rank to a Sergeant, although whilst in the band they are in charge of all personnel, including Officers.

The Squadron also has a number of non-command Officers who are referred to as the Squadron Staff. The command level officer of the squadron is the "Officer Commanding Squadron", usually abbreviated to S.O.C., or just O.C. when used in a Squadron environment.

A Wing consists of at least 2 Squadrons, who usually share a common geographical location.

A region consists of at least 2 wings which usually share a larger geographical area. For example, "Eastern Region".

A Group coordinates the League's activities at a State level and consists of all league units, other than federal units, in their particular state. Group Status is defined by the League's Chief Commissioner, according to set criteria. Units in states that do not conform to these criteria are designated Wings of the Federal Department.

At present, the following groups currently exist within the League:

Australian Air League members participate and compete in several activities including Camping
Camping
Camping is an outdoor recreational activity. The participants leave urban areas, their home region, or civilization and enjoy nature while spending one or several nights outdoors, usually at a campsite. Camping may involve the use of a tent, caravan, motorhome, cabin, a primitive structure, or no...
, Ceremonial Drill
Parade (military)
A military parade is a formation of soldiers whose movement is restricted by close-order manouevering known as drilling or marching. The American usage is "formation or military review". The military parade is now mostly ceremonial, though soldiers from time immemorial up until the late 19th...
, Model Aircraft Building and Flying, Sports and the Duke of Edinburgh's Award. Several members have achieved and have been awarded with their Gold Duke of Edinburgh. Community Service is a major part of an Australian Air League members life. They volunteer for events like the NSW Premier's Senior Citizens Concert, the Red Shield Appeal for the Salvation Army
Salvation Army
The Salvation Army is a Protestant Christian church known for its thrift stores and charity work. It is an international movement that currently works in over a hundred countries....
and Clean Up Australia Day. They also participate in local festivals and ANZAC Day Parades.

Education classes have been provided for the benefit of members. They include:

Members also have the opportunity to gain the AAL General Diploma, the AAL Aviation Diploma, and the AAL Gold Diploma by obtaining the selected amount of education badges the courses prescribes within a particular time period.