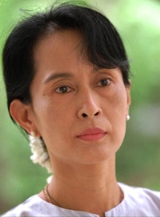 Overview
Aung San Suu Kyi, AC (àuɴ sʰáɴ sṵ tɕì; born June 19, 1945) is a Burmese opposition
Opposition (politics)
In politics, the opposition comprises one or more political parties or other organized groups that are opposed to the government , party or group in political control of a city, region, state or country...
politician and the General Secretary of the National League for Democracy
National League for Democracy
The National League for Democracy is a Burmese political party founded on 27 September 1988. Nobel Peace Prize laureate Aung San Suu Kyi serves as its General Secretary. The party won a substantial parliamentary majority in the 1990 Burmese general election. However, the ruling military junta...
. In the 1990 general election
Burmese general election, 1990
General elections were held in Burma on 27 May 1990, the first multi-party elections since 1960, after which the country had been ruled by a military dictatorship...
, her National League for Democracy party won 59% of the national votes and 81% (392 of 485) of the seats in Parliament. She had, however, already been detained under house arrest
House arrest
In justice and law, house arrest is a measure by which a person is confined by the authorities to his or her residence. Travel is usually restricted, if allowed at all...
before the elections. She remained under house arrest in Burma for almost 15 of the 21 years from 20 July 1989 until her most recent release on 13 November 2010.

Suu Kyi received the Rafto Prize and the Sakharov Prize for Freedom of Thought
Sakharov Prize
The Sakharov Prize for Freedom of Thought, named after Soviet scientist and dissident Andrei Sakharov, was established in December 1988 by the European Parliament as a means to honour individuals or organisations who have dedicated their lives to the defence of human rights and freedom of thought...
in 1990 and the Nobel Peace Prize
Nobel Peace Prize
The Nobel Peace Prize is one of the five Nobel Prizes bequeathed by the Swedish industrialist and inventor Alfred Nobel.-Background:According to Nobel's will, the Peace Prize shall be awarded to the person who...
in 1991.

Revered monks and people! This public rally is aimed at informing the whole world of the will of the people... Our purpose is to show that the entire people entertain the keenest desire for a multiparty democratic system of government.

It would be difficult to dispel ignorance unless there is freedom to pursue the truth unfettered by fear. With so close a relationship between fear and corruption it is little wonder that in any society where fear is rife corruption in all forms becomes deeply entrenched.

Among the basic freedoms to which men aspire that their lives might be full and uncramped, freedom from fear stands out as both a means and an end. A people who would build a nation in which strong, democratic institutions are firmly established as a guarantee against state-induced power must first learn to liberate their own minds from apathy and fear.

Fearlessness may be a gift but perhaps more precious is the courage acquired through endeavour, courage that comes from cultivating the habit of refusing to let fear dictate one's actions, courage that could be described as "grace under pressure" — grace which is renewed repeatedly in the face of harsh, unremitting pressure.