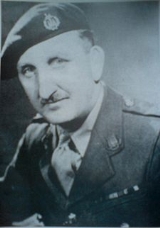 Augustus Newman was educated at Bancroft's School
Bancroft's School
Bancroft's School is a co-educational independent school in Woodford Green, London. The school has around 1,000 pupils aged between 7 and 18...
, Essex
Essex
Essex is a ceremonial and non-metropolitan county in the East region of England, and one of the home counties. It is located to the northeast of Greater London. It borders with Cambridgeshire and Suffolk to the north, Hertfordshire to the west, Kent to the South and London to the south west...
. He was 37 years old and a lieutenant colonel
Lieutenant colonel
Lieutenant colonel is a rank of commissioned officer in the armies and most marine forces and some air forces of the world, typically ranking above a major and below a colonel. The rank of lieutenant colonel is often shortened to simply "colonel" in conversation and in unofficial correspondence...
in the The Essex Regiment (Territorial Army), British Army
British Army
The British Army is the land warfare branch of Her Majesty's Armed Forces in the United Kingdom. It came into being with the unification of the Kingdom of England and Scotland into the Kingdom of Great Britain in 1707. The new British Army incorporated Regiments that had already existed in England...
, attached to No. 2 Commando during the Second World War, when the following deed took place for which he was awarded the V.C.

On 28 March 1942 in the attack on St. Nazaire
St. Nazaire Raid
The St Nazaire Raid or Operation Chariot was a successful British amphibious attack on the heavily defended Normandie dry dock at St Nazaire in German-occupied France during the Second World War. The operation was undertaken by the Royal Navy and British Commandos under the auspices of Combined...
, France
France
The French Republic , The French Republic , The French Republic , (commonly known as France , is a unitary semi-presidential republic in Western Europe with several overseas territories and islands located on other continents and in the Indian, Pacific, and Atlantic oceans. Metropolitan France...
, Lieutenant Colonel Newman was in charge of the military forces and he was one of the first ashore, leading his men and directing operations quite regardless of his own safety. Under his inspiring leadership the troops fought magnificently and held vastly superior numbers of the enemy at bay until the demolition parties had done their work. The colonel then attempted to fight through into open country and not until all the ammunition was spent were he and his men overwhelmed and taken prisoner.