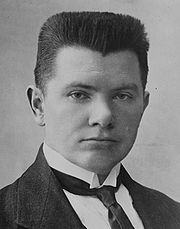 Augustinas Voldemaras (April 16, 1883 in Dysna, Ignalina district municipality
Ignalina district municipality
- Structure :District structure:* 2 cities – Dūkštas and Ignalina;* 3 towns – Mielagėnai, Rimšė and Tverečius;* 726 villages.Largest population :*Ignalina – 6591*Didžiasalis – 1744*Vidiškės – 1084*Dūkštas – 1070*Kazitiškis – 383*Strigailiškis – 334...
– May 16, 1942 in Moscow
Moscow
Moscow is the capital, the most populous city, and the most populous federal subject of Russia. The city is a major political, economic, cultural, scientific, religious, financial, educational, and transportation centre of Russia and the continent...
) was a Lithuania
Lithuania
Lithuania , officially the Republic of Lithuania is a country in Northern Europe, the biggest of the three Baltic states. It is situated along the southeastern shore of the Baltic Sea, whereby to the west lie Sweden and Denmark...
n nationalist political figure. He served as the country's first Prime Minister in 1918, and again from 1926 to 1929.

In 1910, Voldemaras received his Master's Degree
Master's degree
A master's is an academic degree granted to individuals who have undergone study demonstrating a mastery or high-order overview of a specific field of study or area of professional practice...
in History and Philosophy at the University of St. Petersburg, and was awarded a gold medal for his dissertation. A scholarship fund was set up to enable him to further his studies, and eventually he achieved his PhD
Doctor of Philosophy
Doctor of Philosophy, abbreviated as Ph.D., PhD, D.Phil., or DPhil , in English-speaking countries, is a postgraduate academic degree awarded by universities...
. During his years as a student, Voldemaras was greatly influenced by the spirit of ethnic pride and nationalism which was sweeping Lithuania. Although the country was still part of the Russian Empire
Russian Empire
The Russian Empire was a state that existed from 1721 until the Russian Revolution of 1917. It was the successor to the Tsardom of Russia and the predecessor of the Soviet Union...
, small groups both in and outside of Lithuania were forming to agitate for Lithuania's autonomy and independence. Voldemaras joined one of these student groups in St. Petersburg and was elected as its representative to the Congress of Non-Sovereign Nations in Kiev
Kiev
Kiev or Kyiv is the capital and the largest city of Ukraine, located in the north central part of the country on the Dnieper River. The population as of the 2001 census was 2,611,300. However, higher numbers have been cited in the press....
in September, 1917.

In 1926, a segment of the army that disagreed with the policies of President Kazys Grinius
Kazys Grinius
Kazys Grinius was the third President of Lithuania, and held that office from 7 June 1926 to 17 December 1926.When Grinius was born in Selema, near Marijampolė, Lithuania was part of the Russian empire. He studied medicine at the University of Moscow and became a physician...
' administration planned a military coup d'état. They appealed to Voldemaras and Antanas Smetona
Antanas Smetona
Antanas Smetona was one of the most important Lithuanian political figures between World War I and World War II. He served as the first President of Lithuania from April 4, 1919 to June 19, 1920. He again served as the last President of the country from December 19, 1926 to June 15, 1940, before...
to support them, both of whom agreed. The coup took place on December 17, deposing Grinius after an administration of only six months, and installing Smetona as President for the second time and Voldemaras as Prime Minister. To assuage public opinion, in both Lithuania and the outside world, Grinius agreed to "appoint" Voldemaras Prime Minister, if the latter promised to uphold the constitution of 1922. Although Voldemaras made this promise, all of his actions moved the government in a dictatorial direction instead.

Meanwhile, disagreements and resentments between the various political parties of Lithuania were growing. Voldemaras was the head of an organization called Geležinis Vilkas
Iron Wolf (Lithuania)
Iron Wolf was a Lithuanian fascist movement formed by Augustinas Voldemaras in 1927. Set up as a guard movement for Voldemaras' Tautininkai, the Iron Wolves were used by Voldemaras to target his political opponents. The movement was banned in 1930, although it continued as an underground group...
(Iron Wolf), whose honorary head was President Smetona. Although he and Smetona had formerly worked closely together and shared similar ideologies, their association was soon to be brought to an end, partly because of Voldemaras' intense involvement with Geležinis Vilkas. The dynamic personality of Professor Voldemaras continued to attract adherents among the younger nationalist officers, who were favorably impressed by emerging fascism
Fascism
Fascism is a radical authoritarian nationalist political ideology. Fascists seek to rejuvenate their nation based on commitment to the national community as an organic entity, in which individuals are bound together in national identity by suprapersonal connections of ancestry, culture, and blood...
, and who were displeased with what they perceived as Smetona's more moderate course.

Voldemaras was unpopular in some quarters, and in 1929 he survived an assassination attempt in Kaunas
Kaunas
Kaunas is the second-largest city in Lithuania and has historically been a leading centre of Lithuanian economic, academic, and cultural life. Kaunas was the biggest city and the center of a powiat in Trakai Voivodeship of the Grand Duchy of Lithuania since 1413. During Russian Empire occupation...
. Later that year, while attending a meeting of the League of Nations
League of Nations
The League of Nations was an intergovernmental organization founded as a result of the Paris Peace Conference that ended the First World War. It was the first permanent international organization whose principal mission was to maintain world peace...
, he was ousted in a coup by President Smetona, who now ruled as dictator alone until the Soviet
Soviet Union
The Soviet Union , officially the Union of Soviet Socialist Republics , was a constitutionally socialist state that existed in Eurasia between 1922 and 1991....
invasion in 1940. Upon Voldemaras' removal from office, Geležinis Vilkas
Iron Wolf (Lithuania)
Iron Wolf was a Lithuanian fascist movement formed by Augustinas Voldemaras in 1927. Set up as a guard movement for Voldemaras' Tautininkai, the Iron Wolves were used by Voldemaras to target his political opponents. The movement was banned in 1930, although it continued as an underground group...
went underground and received aid and encouragement in its activities from Germany.

Geležinis Vilkas planned and executed a coup in 1934, flying Voldemaras in from Zarasai
Zarasai
Zarasai is a city in northeastern Lithuania, surrounded by many lakes and rivers: to the southwest of the city is Zarasas, north – Zarasaitis, southeast – Baltas, and east – Griežtas. Zarasaitis and Griežtas are connected by Laukesa rivulet....
to take over as head of the government. However, the coup was unsuccessful, and Voldemaras was imprisoned for the next four years. During this time he wrote another major work, a historical account of the life of Christ, which was banned in Lithuania because of its controversial nature.

In 1938, Voldemaras was pardoned and released from prison and exiled. He attempted to return in 1939, but was arrested and sent back to Zarasai. He tried to return on several more occasions, but each time was sent back to his place of exile.

In June 1940, a few days after the Soviet Union
Soviet Union
The Soviet Union , officially the Union of Soviet Socialist Republics , was a constitutionally socialist state that existed in Eurasia between 1922 and 1991....
invaded and occupied Lithuania, Voldemaras made another attempt to return from exile. The reason of his return remains unclear. There have been speculations that he cooperated with NKVD
NKVD
The People's Commissariat for Internal Affairs was the public and secret police organization of the Soviet Union that directly executed the rule of power of the Soviets, including political repression, during the era of Joseph Stalin....
, however some historians suggest that this was a discrediting propaganda by the Soviets. He was arrested at the border by the Bolsheviks, and was not heard from again. It was only learned much later that he had died while in the Moscow Butyrka prison
Butyrka prison
Butyrka prison was the central transit prison in pre-Revolutionary Russia, located in Moscow.The first references to Butyrka prison may be traced back to the 17th century. The present prison building was erected in 1879 near the Butyrsk gate on the site of a prison-fortress which had been built...
on May 16, 1942.

Voldemaras was a professor of philology
Philology
Philology is the study of language in written historical sources; it is a combination of literary studies, history and linguistics.Classical philology is the philology of Greek and Classical Latin...
, as well as a polyglot
Polyglot (person)
A polyglot is someone with a high degree of proficiency in several languages. A bilingual person can speak two languages fluently, whereas a trilingual three; above that the term multilingual may be used.-Hyperpolyglot:...
, familiar with sixteen different languages.

In 1929, Voldemaras acted as the godfather
Godparent
A godparent, in many denominations of Christianity, is someone who sponsors a child's baptism. A male godparent is a godfather, and a female godparent is a godmother...
to the three year old Valdas Adamkus
Valdas Adamkus
Valdas Adamkus was President of Lithuania from 1998 to 2003 and again from 2004 to 2009.In Lithuania, the President's tenure lasts for five years; Adamkus' first term in office began on February 26, 1998 and ended on February 28, 2003, following his defeat by Rolandas Paksas in the next...
, who later became the President of Lithuania.
The source of this article is wikipedia, the free encyclopedia.  The text of this article is licensed under the GFDL.