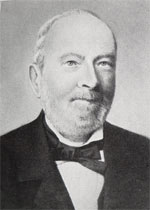 August Ferdinand Howaldt (23 October 1809 – 4 August 1883) was a German
Germany
Germany , officially the Federal Republic of Germany , is a federal parliamentary republic in Europe. The country consists of 16 states while the capital and largest city is Berlin. Germany covers an area of 357,021 km2 and has a largely temperate seasonal climate...
engineer
Engineer
An engineer is a professional practitioner of engineering, concerned with applying scientific knowledge, mathematics and ingenuity to develop solutions for technical problems. Engineers design materials, structures, machines and systems while considering the limitations imposed by practicality,...
and ship builder.

Born in Braunschweig
Braunschweig
Braunschweig , is a city of 247,400 people, located in the federal-state of Lower Saxony, Germany. It is located north of the Harz mountains at the farthest navigable point of the Oker river, which connects to the North Sea via the rivers Aller and Weser....
, the son of the silversmith David Ferdinand Howaldt, with whom he got his first practice working in metal, Howaldt made an apprenticeship in Hamburg
Hamburg
-History:The first historic name for the city was, according to Claudius Ptolemy's reports, Treva.But the city takes its modern name, Hamburg, from the first permanent building on the site, a castle whose construction was ordered by the Emperor Charlemagne in AD 808...
and became a practical mechanicus.

In 1838 he moved to Kiel
Kiel
Kiel is the capital and most populous city in the northern German state of Schleswig-Holstein, with a population of 238,049 .Kiel is approximately north of Hamburg. Due to its geographic location in the north of Germany, the southeast of the Jutland peninsula, and the southwestern shore of the...
, where he married Emma Diederichsen. In Kiel he founded together with the Kiel entrepreneur Johann Schweffel the "Maschinenbauanstalt Schweffel & Howaldt", a company initially building boilers for industry and the new railroad companies in between Hamburg and Kiel and agricultural machinery for the surrounding estates in Holstein
Holstein
Holstein is the region between the rivers Elbe and Eider. It is part of Schleswig-Holstein, the northernmost state of Germany....
.

In 1849 Schweffel & Howaldt built its first steam engine for naval purposes for the Von der Tann
Von der Tann (gunboat)
Von der Tann was a steam-powered 120 ton gunboat built in 1849 at Conradi shipyards in Kiel for the small navy of Schleswig-Holstein, the first propeller-driven gunboat in the world...
, a gunboat for the small navy of Schleswig-Holstein
Schleswig-Holstein
Schleswig-Holstein is the northernmost of the sixteen states of Germany, comprising most of the historical duchy of Holstein and the southern part of the former Duchy of Schleswig...
, and the Brandtaucher
Brandtaucher
Brandtaucher was a submersible designed by the German inventor and engineer Wilhelm Bauer and built by Schweffel & Howaldt in Kiel for Schleswig-Holstein's Flotilla in 1850....
, the first German incendiary diver or submarine
Submarine
A submarine is a watercraft capable of independent operation below the surface of the water. It differs from a submersible, which has more limited underwater capability...
designed by Wilhelm Bauer
Wilhelm Bauer
Wilhelm Bauer was the German inventor and engineer, who built several hand-powered submarines.-Biography:...
. The Brandtaucher is today an exhibit of the German Forces Military History Museum in Dresden
Dresden
Dresden is the capital city of the Free State of Saxony in Germany. It is situated in a valley on the River Elbe, near the Czech border. The Dresden conurbation is part of the Saxon Triangle metropolitan area....
. Schweffel & Howaldt also built two tugs 1860 and 1864. When he passed his company to his sons Georg, Bernhard and Hermann Howaldt, who continued in 1879 under the firm Gebrüder Howaldt. The firm merged in 1889 with Georg's shipyard in Kiel to become Howaldtswerke
Howaldtswerke
Howaldtswerke-Deutsche Werft is a German shipbuilding company, headquartered in Kiel. In 2009 it was the largest shipyard in Germany and has more than 2,400 employees. It has been part of ThyssenKrupp Marine Systems owned by ThyssenKrupp, since 2005...
AG in Kiel, today known as HDW.