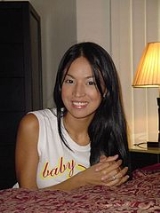 Miles was born in Caloocan, Philippines, to Victorino Sandel and Maria Perla Santos. At 16, Miles, the third among four children, was already appearing in GMA
GMA Network
GMA Network is a major commercial television & radio network in the Philippines. GMA Network is owned by GMA Network, Inc. a publicly listed company...
sitcoms like Beh Bote Nga and German Moreno
German Moreno
German Moreno, also known as Kuya Germs or the Master Showman , is a Filipino television host, actor, comedian and Talent Manager popular during the 1980s...
's Best Friends. In between showbiz assignments, she would join beauty contests such as Miss Ever Gotesco, Miss Caloocan, Miss Lions Club, plus Miss Global Philippines – in which her sister ended up being the first runner-up and she won fourth runner-up. Although she never won a title she achieved runner-up positions, which provided a steady income. She finished her secondary education at saint joseph school gagalangin.Miles has a child from a previous relationship from Andrew Michael Rivera residing in San Jose Del Monte Bulacan. They were in a relationship for 2 years

Her debut role was a provincial prostitute in the movie Prosti (abbreviation for "prostitute"). Highly successful at the box office, the film grossed ₱
Philippine peso
The peso is the currency of the Philippines. It is subdivided into 100 centavos . Before 1967, the language used on the banknotes and coins was English and so "peso" was the name used...
29 million. To date, Prosti remains her highest grossing movie. The success in the titular role led to other movie offers, as well as product endorsement deals from companies such as Bench (a clothing company in the Philippines).

After Prosti, Miles starred in the movie Xerex (based on a tabloid sex advice column), where she played three different roles. Miles' next movie, Sanib, saw her play a character who is possessed by demons.

Targeting multi-media exposure, Miles' manager secured her a contract with ABS-CBN
ABS-CBN
ABS–CBN Corporation is a Philippine-based media conglomerate. It is the Philippines' largest media and entertainment conglomerate. The corporation was the merger of Alto Broadcasting System which at that time owned by James Lindenberg and Antonio Quirino, and the Chronicle Broadcasting Network ...
television network. She appeared as co-host of daily noontime show Masayang Tanghali Bayan, and in several ABS-CBN sitcoms. As part of a strategy to build wider appeal, Miles also began appearing in more family friendly movie roles, in titles like Sanib, A Beautiful Life, and Gagamboy
Gagamboy
Gagamboy is a Filipino science fiction film made in 2004 directed by Erik Matti and starring Vhong Navarro. It is of the same ilk as the Spider-Man films, with a mutated spider that causes Gagamboy to gain his superpowers.-Plot:...
– Regal Film's 2003 Metro Manila Film Festival
Metro Manila Film Festival
upright|thumb|320px|Metro Manila Film Festival Official LogoThe Metro Manila Film Festival-Philippines is the annual film festival held in Manila...
entry – as actor Vhong Navarro
Vhong Navarro
Vhong Navarro is a Filipino actor, comedian, dancer, singer, and host at ABS-CBN. He is part of the dance group Streetboys in the Philippines.-Career:...
's love interest.

Miles has three times appeared on the cover of FHM Philippines: She was a covergirl in 2002, 2004 – depicted covered in gold-paint for the magazines' 75th issue, and in 2009. Aubrey was also one of three FHM Calendar Girls along with Maui Taylor
Maui Taylor
Maui Taylor is a Filipino model, singer, and actress.-Career:Taylor initially got into show biz with the assistance of a cousin who was a member of a dance group in the Philippines. She was eventually cast on the Filipino TV soap opera Anna Karenina at the age of 14...
and Diana Zubiri
Diana Zubiri
Rosemarie Joy Garcia , better known by her screen name Diana Zubiri, is a Filipina actress.She was discovered by Seiko Films when she was 15 years of age soon after applying for work in Japan. She then started on sexy roles on various films by Seiko...
for the FHM 2003 calendar.

She joined Survivor Philippines: Celebrity Showdown
Survivor Philippines: Celebrity Showdown
Survivor Philippines: Celebrity Showdown is the third season of the Philippine version of the reality television series Survivor.Richard Gutierrez took over hosting duties after the show's previous host, Paolo Bediones, moved to TV5 a few months after the second season ended airing...
and made it all the way to the end, Day 36 with Ervic Vijandre, Solenn Heussaff, and Akihiro Sato
Akihiro Sato (model)
Akihiro Sato is a Japanese Brazilian model currently living in The Philippines.-Career:Akihiro started modelling in Brazil and Thailand. He is appearing on a new Filipino movie called Handumanan. He is one of the most popular models in the Philippines as of 2009...
as the shows "Final Four". Her game play is compared to the game play of Parvati Shallow
Parvati Shallow
Parvati Shallow is the $1,000,000 winner of the reality television series Survivor: Micronesia after receiving votes from Eliza Orlins, Jason Siska, Alexis Jones, Natalie Bolton, and Cirie Fields. She had previously competed in Survivor: Cook Islands where she placed sixth, and later was the...
. She was voted out live and became the 7th member of the jury. She came in fourth place respectively. She is the only one survivor that was voted out after the game ended in survivor (any) history.


All figures confirmed by Regal Films

She is engaged to actor Troy Montero
Troy Montero
Troy Montero is a Filipino actor.He was born to an American father of German and Irish ancestry, and a U.S. born Filipina mother. He currently appears on Filipino soap operas and television series. He and girlfriend Aubrey Miles had a baby boy at St...
with whom she had a child, in 2008. She also has a son from JP Obligacion.