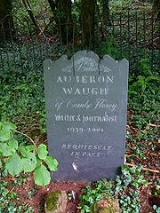 Overview
Auberon Alexander Waugh was a British
United Kingdom
The United Kingdom of Great Britain and Northern IrelandIn the United Kingdom and Dependencies, other languages have been officially recognised as legitimate autochthonous languages under the European Charter for Regional or Minority Languages...
author and journalist, son of the novelist Evelyn Waugh
Evelyn Waugh
Arthur Evelyn St. John Waugh , known as Evelyn Waugh, was an English writer of novels, travel books and biographies. He was also a prolific journalist and reviewer...
. He was known to his family and friends as Bron Waugh.
Born at his maternal grandparents' house at Pixton Park
Pixton Park
Pixton Park is a country house in the parish of Dulverton, Somerset, England. It is associated with at least three historically significant families or dynasties: the Acland Baronets, the politicians and diplomats the Herberts, and the Waughs, a series of writers...
, Dulverton
Dulverton
Dulverton is a town and civil parish in the heart of West Somerset, England, near the border with Devon. The town has a population of 1,630. The parish includes the hamlets of Battleton and Ashwick which is located approximately north west of Dulverton...
, Somerset
Somerset
The ceremonial and non-metropolitan county of Somerset in South West England borders Bristol and Gloucestershire to the north, Wiltshire to the east, Dorset to the south-east, and Devon to the south-west. It is partly bounded to the north and west by the Bristol Channel and the estuary of the...
, he was known as "Bron" by friends and family. He was the second child and first son of the novelist Evelyn Waugh and his wife, Laura (née Herbert). His paternal grandfather was author and publisher Arthur Waugh
Arthur Waugh
Arthur Waugh was an English author, literary critic, and publisher. He was the father of the writers Alec and Evelyn Waugh.-His life:...
and his uncle was Alec Waugh
Alec Waugh
Alexander Raban Waugh , was a British novelist, the elder brother of the better-known Evelyn Waugh and son of Arthur Waugh, author, literary critic, and publisher...
.
x