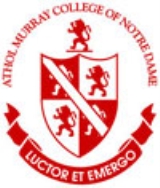 In 1920, the Sisters of Charity of St. Louis
Sisters of Charity of St. Louis
The Sisters of Charity of St. Louis is a Roman Catholic religious congregation. It was founded for the education of poor girls, at Vannes in Brittany, in 1803, by Madame Molé, née de Lamoignan, at the suggestion of Antoine-Xavier Maynaud de Pancemont, Bishop of Vannes.-History:In 1805 Pope Pius...
opened the Notre Dame of the Prairies Convent and St. Augustine's residential elementary and high school for boys and girls at Wilcox, Saskatchewan; a small town on the Canadian prairies 49 kilometres (30.4 mi) south of Regina
Regina, Saskatchewan
Regina is the capital city of the Canadian province of Saskatchewan. The city is the second-largest in the province and a cultural and commercial centre for southern Saskatchewan. It is governed by Regina City Council. Regina is the cathedral city of the Roman Catholic and Romanian Orthodox...
– the provincial capital.

Father Athol Murray
Athol Murray
Monsignor Athol Murray, was a Canadian priest and educator.Born in Toronto, Ontario, he was educated at Loyola College, St. Michael's College School, St. Hyacinthe College, and Université Laval....
was appointed to St. Augustine's parish in Wilcox, Saskatchewan
Wilcox, Saskatchewan
Wilcox is a small village in Saskatchewan, Canada. Located approximately 41 kilometers south of Regina, Wilcox is best known for being the home of the Athol Murray College of Notre Dame, a boarding school for students in grades 9-12. The village is also home to the Notre Dame Hounds ice hockey...
, in 1927. The institution's name was eventually changed to honour his contributions.

In the beginning, the College had no running water or central heat. In 1930, fees were $18 per month, but many students couldn't afford to pay. Père (Father) Murray accepted students on the basis that they desired an education, not on their ability to pay. A side of beef, a chicken, a bucket of coal and produce were often accepted instead of money. Students came from everywhere and from every type of social, cultural and religious background.

Murray was assisted by Sister Mary Edith McCullough. Her teaching career spanned 30 years at Wilcox. Sr. Edith ran the elementary and high schools while Père spent most of his time with the students in the Arts programs. In 1933, Père Murray succeeded in obtaining an official affiliation with the University of Ottawa.

Père Murray believed in the Greek philosophy of developing the mind, body and spirit and envisioned a school that could develop great scholars and athletes through equal emphasis on the disciplines of academics, athletics and faith. Notre Dame's longstanding success in developing well-balanced individuals is a testament to that vision.

Though Murray died in 1975, his legacy lives on. Père's beloved Notre Dame College continues to produce many of North America's finest student athletes through a balanced program that emphasizes the values of good character, leadership and community living. Père's motto "Luctor et Emergo" (Struggle and Emerge) is still reinforced today.

Current Tampa Bay Lightning
Tampa Bay Lightning
The Tampa Bay Lightning are a professional ice hockey team based in Tampa, Florida. They are members of the Southeast Division of the Eastern Conference of the National Hockey League . They have one Stanley Cup championship in their history, in 2003–04. They are often referred to as the...
forward Vincent Lecavalier
Vincent Lecavalier
Vincent Lecavalier is a Canadian professional hockey center and captain of the Tampa Bay Lightning of the National Hockey League .-Rimouski Océanic:...
, and former Lightning forward Brad Richards
Brad Richards
Bradley Glenn Richards is a Canadian professional ice hockey centre and alternate captain for the New York Rangers of the National Hockey League .-Early career:Born and raised in Murray Harbour, Prince Edward Island...
, currently of the New York Rangers
New York Rangers
The New York Rangers are a professional ice hockey team based in the borough of Manhattan in New York, New York, USA. They are members of the Atlantic Division of the Eastern Conference of the National Hockey League . Playing their home games at Madison Square Garden, the Rangers are one of the...
, played together in the school's AAA Bantam program, while numerous others have gone on to be drafted into the WHL
Western Hockey League
The Western Hockey League is a major junior ice hockey league based in Western Canada and the Northwestern United States. The WHL is one of three leagues that constitute the Canadian Hockey League as the highest level of junior hockey in Canada...
.