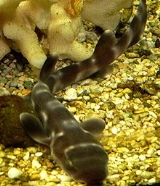 Encyclopedia
Atelomycterus is a genus
Genus
In biology, a genus is a low-level taxonomic rank used in the biological classification of living and fossil organisms, which is an example of definition by genus and differentia...
of catshark
Catshark
Catsharks are ground sharks of the family Scyliorhinidae, with over 150 known species. While they are generally known as catsharks, many species are commonly called dogfish....
, family
Family (biology)
In biological classification, family is* a taxonomic rank. Other well-known ranks are life, domain, kingdom, phylum, class, order, genus, and species, with family fitting between order and genus. As for the other well-known ranks, there is the option of an immediately lower rank, indicated by the...
Scyliorhinidae.