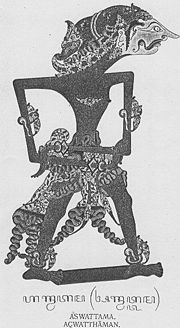 Ashwatthama was the son of Dronacharya and Kripi. Kripi was the sister of Kripacharya. Drona loved his son very dearly. But, Dronacharya was very poor. Once when Ashwatthama was a child, he was very hungry. His mother did not even own a cow to give him milk. So, she fed him with finely cooked rice that looked like milk. On seeing this, Dronacharya was very hurt. He remembered his childhood friend Drupada. So, Dronacharya goes to the court of Drupada to ask for a cow. But, Drupada who was a king, humiliated Drona, saying that Drona is no more a friend of his as Drupada believes that friendship exists only between equals. Dronacharya thus returned empty-handed and hurt. He planned to take revenge on Drupada later.


Ashwatthama's role in the Kurukshetra war

Since Hastinapur, ruled by King Dhrishtrastra, offered Dronacharya the privilege of teaching the Kuru princes, both Dronacharya and Ashwatthama were loyal to Hastinapur and fought for the Kauravas in the Kurukshetra war. Before Dronacharya's death, Ashwatthama visited his father in order to seek his blessing so that he could win the war for the Kauravas. But, Dronacharya refused to give such a blessing to him. He told Ashwatthama to win the war using his own strength and not through a blessing from him. After the death of Dushaasana, Ashwatthama even suggested to Duryodhana to make peace with the Pandavas keeping in mind the welfare of Hastinapur. But, Duyrodhana strongly rejected his suggestion. Ashwatthama's hatred towards the Pandavas increased after Duryodhana's defeat to Bhima during Gadayuddha.

On the night when Duryodhan was mortally wounded by Bhima during the Gadayudda, Ashwatthama along with Kripacharya and Kritavarma
Kritavarma
Kritavarma was an important Yadava warrior and chieftain, and a contemporary of Krishna. He finds mention in several ancient Sanskrit texts including the Mahābhārata, the Vishnu Purana, the Bhagavata Purana and the Harivamsa....
visited the spot where the dying Duryodhan was lying. Ashwatthama told Duryodhan that he will never forgive the Pandavas for leading Duryodan to this situation and also for his father's (Dronacharya) dishonourable death. He swore to kill the Pandavas by any possible means. Duryodhana made Ashwatthama the General of the Kaurava forces.

On the last night of the war after Duryodhana's defeat, a very disturbed and restless Ashwatthama was sitting sleepless under a large tree. An owl caught his attention. He observed that an owl was being attacked and harassed by crows in the morning. This owl attacked the same group of crows at night. This gave him an idea of attacking the Pandava camp at midnight. He gathered the only other surviving Kaurava warriors namely Kritavarma and Kripacharya and attacked the Pandava camp on the 18th night of the Kurukshetra war. He killed Dhrishtadyumna, Shikhandi and many other prominent warriors of Pandava army while they were sleeping. Those who tried to flee from Ashwatthama's wrath, were hacked down by Kripacharyya and Kritavarma who were positioned at the camp's entrance. He killed Draupadi's five sons, the Upa-Pandavas, while they were sleeping believing them to be the five Pandava brothers.

After destroying the entire Pandava camp, Ashwatthama carried the five heads of Draupadi's sons and proceeded towards Duryodana claiming that he had beheaded the Pandavas. Then, Duryodana told him to give the head of Bhima. Ashwatthama gave the head of Draupadi's son thinking that it to be Bhima's head. Duryodana held it in his palm and tried to crush the head into pieces. Since, the head facing Duryodana does not turn on the other side, then Duryodana declared that Ashwatthama has not killed Bhima and other Pandava brothers. This was because the magnitude of the sibling rivalry between Duryodana and Bhima is to such a height, that even after beheading Bhima, Bhima's head will never see Duryodana's face. Ashwatthama realising his mistake, went to Sage Vedavyasa's ashram in order to seek salvation (prayaschittam) for his crime.

Aswattahma believed that it was acceptable for him to attack the unexpected Pandavas due to his father’s death by unjust means. Although he did believe his vengeance to be justified, he was warned by people of his own side that it was not. Kripa even tells Aswattama to seek the advice of Dhristarashtra and Vidura, elders of his family who are much wiser and more experienced than the young Aswattahma. “Aswatthama rejects Krpa’s reasoning: all men favour their own judgements Aswatthama, thought of a Brahmin, has always followed the Ksatriya Dharma." They are not too pleased with Aswattahma‘s words and advise him not to go through with this adharmic plan. “Kripa emphasizes the importance of taking the advise of friends and elders, and counsels Aswatthama against pursuing his plan."

The Pandavas and Krishna who were away during night, now returned to their camp the next day morning. Incensed over this cowardly act of Ashwatthama, the Pandavas went after him to sage Vyasa's ashram. On seeing the approaching angered Pandavas, Ashwatthama who learnt that he had killed the upapandavas and not the Pandavas, realised that he was trapped with the Pandavas. As a last resort, he used his sacred knowledge of the Vedas to devise a Bramhastra from a blade of grass and invoked it against the Pandavas and Krishna, although he was strictly forbidden to do so by his father Dronacharya for any purpose whatsoever. On seeing the Brahmastra approaching the Pandavas, Krishna asked Arjuna to invoke the same. Arjuna invokes another Brahmastra towards Ashwatthama.

On seeing the two powerful Brahmastras heading for a head on cataclysmic (catastrophic) collision that would result in the total annihilation of the entire Earth, sage Vyasa stopped these divine weapons from colliding with each other by using his yogic power. He asked both these warriors to withdraw their respective weapons. Arjuna was able to withdraw his Brahmastra, while Ashwatthama could not do so as Dronocharya did not teach his son how to withdraw it. However, he was given the option of deviating his weapon towards one single isolated object in a place that was not inhabited by any form of life, so that the Brahmastra does not harm anyone on Earth. But Ashwatthama, out of spite, directed the weapon towards the womb of Uttara (wife of Abhimanyu) who was carrying Abhimanyu's son (Parikshit) in an attempt to end the lineage of the Pandavas. Krishna used his sudarshan chakra to stop the Brahmastra and save Uttara's unborn child.

Bhishma
Bhishma
Bhishma or Bheeshma or Devavrata or 'Bhishma Pitamah' was the eighth son of Kuru King Shantanu who was blessed with wish-long life and had sworn to serve the ruling Kuru king. He was one of the most prominent characters of the great Indian epic, the Mahabharata. He was the grand uncle of both the...
strove hard throughout his life to protect Hastinapur in his quest of finding the legal heir of Sathyavati's clan. Bhishma entrusted on Krishna this responsibility of finding the next heir of Sathyavati's family and to continue the lineage of the Pandavas. Although, after Duryodhana's defeat it appeared that Hastinapur was now safe, as it was clear that Yudhishthira was the next king of Hastinapur, Ashwatthama's action brought an end to the Pandava line.

Lord Krishna then placed a curse on Ashwatthama that "he will carry the burden of all people's sins on his shoulders and will roam alone like a ghost without getting any love and courtesy till the end of Kaliyuga; He will have neither any hospitality nor any accommodation; He will be in total isolation from mankind and society; His body will suffer from a host of incurable diseases forming sores and ulcers that would never heal". Ashwatthama had a gem which was similar to Shamantakamani on his forehead which used to protect the wearer from fear of any snakes , ghosts, demigods and demons. So, Ashwatthama was asked to surrender this gem. Lord Sri Krishna further states that "the wound caused by the removal of this gem on his forehead will never heal and will suffer from leprosy
Leprosy
Leprosy or Hansen's disease is a chronic disease caused by the bacteria Mycobacterium leprae and Mycobacterium lepromatosis. Named after physician Gerhard Armauer Hansen, leprosy is primarily a granulomatous disease of the peripheral nerves and mucosa of the upper respiratory tract; skin lesions...
, till the end of Kaliyuga". Thus, Ashwatthama will be in search of death every moment, and yet he will never die.
At the end of Kali Yuga
Kali Yuga
Kali Yuga is the last of the four stages that the world goes through as part of the cycle of yugas described in the Indian scriptures. The other ages are Satya Yuga, Treta Yuga and Dvapara Yuga...
, Ashwatthama is to meet Sri Kalki
Kalki
In Hinduism, Kalki is the tenth and final Maha Avatar of Vishnu who will come to end the present age of darkness and destruction known as Kali Yuga. The name Kalki is often a metaphor for eternity or time...
who will rid him of his curse and give liberation.

Uttara delivered a child which was dead. All the women approached lord Krishna to bring the baby back to life who was the only successor of the Pandava dynasty. Krishna poured few drops of water on his hands and tells "If I have truly followed Dharma throughout my life, then let this child come back to life". So, saying he sprinkled the water on the child and touched him at his chest testing whether he got life or not, it reviving Abhimanyu's son. Later, Abhimanyu's son becomes an ardent devotee of lord Krishna and will be named as Parikshit (meaning the one who has been tested, when he was in his mother's womb, Lord Krishna who rescued him in the womb). The Pandavas ruled for 36 years. After the end of Pandavas, Parikshit successfully rules Hastinapur for 27 years and was be succeeded by Janamejaya.

Ashwatthama seeks the knowledge of Brahmastra
Brahmastra
In ancient Sanskrit writings, the Brahmastra was a weapon created by Brahma.-Features:It is sometimes known as the Brahma Astra . As described in a number of the Puranas, it was considered the deadliest weapon...
from his father Dronacharya.


The partial knowledge of Abhimanyu and Ashwatthama

Abhimanyu is often quoted as an example for his partial knowledge about Chakravyha. Since, he knew how to penetrate the Chakravyha, but did not know how to exit from it during the time of danger contributed to his death. Similarly, Ashwatthama too had a partial knowledge in the context of Brahmastra
Brahmastra
In ancient Sanskrit writings, the Brahmastra was a weapon created by Brahma.-Features:It is sometimes known as the Brahma Astra . As described in a number of the Puranas, it was considered the deadliest weapon...
. He only knew how to invoke it. But did not know how to withdraw it. It was only Arjuna who had complete knowledge of both Padmavyooha (to break and exit from it) and Brahmastra (to invoke and withdraw it).

In case of Ashwatthama, Dronacharya teaches Ashwatthama only to invoke Brahmastra, but does not teach him how to withdraw it. If an archer is aware of both the invocation and withdrawal of Brahmastra, then he can invoke it as many times as he wants. Hence, to avoid Ashwatthama from invoking Brahmastra multiple times, Dronacharya only gives a partial knowledge about it. If an archer invokes Brahmastra, it not only destroys the target, but also leads to a famine for 12 years in the region. If a Brahmastra is invoked twice, then it can even lead to draining the entire ocean on Earth.