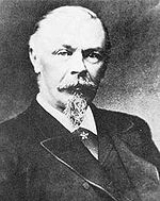 Encyclopedia
Arthur Joachim von Oettingen (March 28, 1836 - September 5, 1920) was a Baltic German
Baltic German
The Baltic Germans were mostly ethnically German inhabitants of the eastern shore of the Baltic Sea, which today form the countries of Estonia and Latvia. The Baltic German population never made up more than 10% of the total. They formed the social, commercial, political and cultural élite in...
physicist
Physicist
A physicist is a scientist who studies or practices physics. Physicists study a wide range of physical phenomena in many branches of physics spanning all length scales: from sub-atomic particles of which all ordinary matter is made to the behavior of the material Universe as a whole...
and music theorist who was born at the Ludenhof Estate in Dorpat, Livonia
Livonia
Livonia is a historic region along the eastern shores of the Baltic Sea. It was once the land of the Finnic Livonians inhabiting the principal ancient Livonian County Metsepole with its center at Turaida...
. He was the brother of theologian Alexander von Oettingen
Alexander von Oettingen
Alexander von Oettingen , Baltic German Lutheran theologian and statistician.Oettingen, the member of a Livonian Baltic German noble family that produced many scholars, including his brothers Georg von Oettingen, professor of medicine at the University of Tartu , and Arthur von Oettingen, professor...
(1827–1905) and ophthalmologist Georg von Oettingen
Georg von Oettingen
Georg von Oettingen was a German physician and ophthalmologist who was a native of Gut Wissust...
(1824–1916).

He studied astronomy
Astronomy
Astronomy is a natural science that deals with the study of celestial objects and phenomena that originate outside the atmosphere of Earth...
and physics
Physics
Physics is a natural science that involves the study of matter and its motion through spacetime, along with related concepts such as energy and force. More broadly, it is the general analysis of nature, conducted in order to understand how the universe behaves.Physics is one of the oldest academic...
at the University of Dorpat, and furthered his education of physics in Paris
Paris
Paris is the capital and largest city in France, situated on the river Seine, in northern France, at the heart of the Île-de-France region...
in the laboratories of Antoine César Becquerel
Antoine César Becquerel
Antoine César Becquerel was a French scientist and a pioneer in the study of electric and luminescent phenomena.He was born at Châtillon sur LoCrea...
(1788–1878) and Henri Victor Régnault
Henri Victor Regnault
Henri Victor Regnault was a French chemist and physicist best known for his careful measurements of the thermal properties of gases. He was an early thermodynamicist and was mentor to William Thomson in the late 1840s....
(1810–1878), and afterwards at Berlin
Berlin
Berlin is the capital city of Germany and is one of the 16 states of Germany. With a population of 3.45 million people, Berlin is Germany's largest city. It is the second most populous city proper and the seventh most populous urban area in the European Union...
in the laboratories of Heinrich Gustav Magnus (1802–1870), Johann Christian Poggendorff
Johann Christian Poggendorff
Johann Christian Poggendorff , was a German physicist born in Hamburg.By far the greater and more important part of his work related to electricity and magnetism. Poggendorff is known for his electrostatic motor which is analogous to Wilhelm Holtz's electrostatic machine...
(1796–1877) and Heinrich Wilhelm Dove
Heinrich Wilhelm Dove
Heinrich Wilhelm Dove was a Prussian physicist and meteorologist. He was the father of Alfred and Richard Dove.-Early Years:...
(1803–1879).

In 1868 he became a professor at Dorpat, where he founded a meteorological
Meteorology
Meteorology is the interdisciplinary scientific study of the atmosphere. Studies in the field stretch back millennia, though significant progress in meteorology did not occur until the 18th century. The 19th century saw breakthroughs occur after observing networks developed across several countries...
observatory. In 1893 he moved to the University of Leipzig
University of Leipzig
The University of Leipzig , located in Leipzig in the Free State of Saxony, Germany, is one of the oldest universities in the world and the second-oldest university in Germany...
, where he remained until 1919 as a lecturer and honorary professor. In 1898 and 1904 he published the third and fourth volumes of Poggendorff's Biographisch-Literarisches Handwörterbuch der exakten Naturwissenschaften.

Oettingen was a primary advocate of a theory of acoustical
Acoustics
Acoustics is the interdisciplinary science that deals with the study of all mechanical waves in gases, liquids, and solids including vibration, sound, ultrasound and infrasound. A scientist who works in the field of acoustics is an acoustician while someone working in the field of acoustics...
relationships known as "harmonic dualism". This concept was later expanded and elaborated on by musicologist Hugo Riemann
Hugo Riemann
Karl Wilhelm Julius Hugo Riemann was a German music theorist.-Biography:Riemann was born at Grossmehlra, Schwarzburg-Sondershausen. He was educated in theory by Frankenberger, studied the piano with Barthel and Ratzenberger, studied law, and finally philosophy and history at Berlin and Tübingen...
(1849–1919). Oettingen is also credited for introducing a measurement of musical interval
Interval (music)
In music theory, an interval is a combination of two notes, or the ratio between their frequencies. Two-note combinations are also called dyads...
known as the millioctave
Millioctave
The millioctave is a unit of measurement for musical intervals. As is expected from the prefix milli-, an octave is defined as 1000 millioctaves...
.
The source of this article is wikipedia, the free encyclopedia.  The text of this article is licensed under the GFDL.