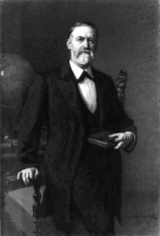 
Georg Friedrich Julius Arthur von Auwers (September 12, 1838 – January 24, 1915) was a German
Germany
Germany , officially the Federal Republic of Germany , is a federal parliamentary republic in Europe. The country consists of 16 states while the capital and largest city is Berlin. Germany covers an area of 357,021 km2 and has a largely temperate seasonal climate...
astronomer
Astronomer
An astronomer is a scientist who studies celestial bodies such as planets, stars and galaxies.Historically, astronomy was more concerned with the classification and description of phenomena in the sky, while astrophysics attempted to explain these phenomena and the differences between them using...
.

Auwers was born in Göttingen
Göttingen
Göttingen is a university town in Lower Saxony, Germany. It is the capital of the district of Göttingen. The Leine river runs through the town. In 2006 the population was 129,686.-General information:...
, attended the University of Göttingen and worked at the University of Königsberg
University of Königsberg
The University of Königsberg was the university of Königsberg in East Prussia. It was founded in 1544 as second Protestant academy by Duke Albert of Prussia, and was commonly known as the Albertina....
. He specialized in astrometry
Astrometry
Astrometry is the branch of astronomy that involves precise measurements of the positions and movements of stars and other celestial bodies. The information obtained by astrometric measurements provides information on the kinematics and physical origin of our Solar System and our Galaxy, the Milky...
, making very precise measurements of stellar positions and motions. He detected the companion stars of Sirius
Sirius
Sirius is the brightest star in the night sky. With a visual apparent magnitude of −1.46, it is almost twice as bright as Canopus, the next brightest star. The name "Sirius" is derived from the Ancient Greek: Seirios . The star has the Bayer designation Alpha Canis Majoris...
and Procyon
Procyon
Procyon is the brightest star in the constellation Canis Minor. To the naked eye, it appears to be a single star, the seventh brightest in the night sky with a visual apparent magnitude of 0.34...
from their effects on the main star's motion, before telescopes were powerful enough to visually observe them. He was from 1866 Secretary to the Berlin Academy, and directed expeditions to measure the transits
Astronomical transit
The term transit or astronomical transit has three meanings in astronomy:* A transit is the astronomical event that occurs when one celestial body appears to move across the face of another celestial body, hiding a small part of it, as seen by an observer at some particular vantage point...
of Venus
Venus
Venus is the second planet from the Sun, orbiting it every 224.7 Earth days. The planet is named after Venus, the Roman goddess of love and beauty. After the Moon, it is the brightest natural object in the night sky, reaching an apparent magnitude of −4.6, bright enough to cast shadows...
, in order to measure the distance from the earth to the Sun
Sun
The Sun is the star at the center of the Solar System. It is almost perfectly spherical and consists of hot plasma interwoven with magnetic fields...
more accurately, and therefore be able to more accurately calculate the dimensions of the Solar System
Solar System
The Solar System consists of the Sun and the astronomical objects gravitationally bound in orbit around it, all of which formed from the collapse of a giant molecular cloud approximately 4.6 billion years ago. The vast majority of the system's mass is in the Sun...
with greater precisions. He began a project to unify the all available sky charts, an interest that began with his catalog of nebulae which he published in 1862. He died in Berlin
Berlin
Berlin is the capital city of Germany and is one of the 16 states of Germany. With a population of 3.45 million people, Berlin is Germany's largest city. It is the second most populous city proper and the seventh most populous urban area in the European Union...
. His grave is preserved in the Protestant Friedhof I der Jerusalems- und Neuen Kirchengemeinde (Cemetery No. I of the congregations of Jerusalem's Church
Jerusalem's Church
Jerusalem's Church is one of the churches of the Evangelical Congregation in the Friedrichstadt , a member of the Protestant umbrella organisation Evangelical Church of Berlin-Brandenburg-Silesian Upper Lusatia. The present church building is located in Berlin, borough Friedrichshain-Kreuzberg, in...
and New Church
Deutscher Dom
Deutscher Dom is the colloquial naming for the New Church located in Berlin on the Gendarmenmarkt across from Französischer Dom . Its parish comprised the northern part of the then new quarter of Friedrichstadt, which until then belonged to the parish of the congregations of Jerusalem's Church...
) in Berlin-Kreuzberg
Kreuzberg
Kreuzberg, a part of the combined Friedrichshain-Kreuzberg borough located south of Mitte since 2001, is one of the best-known areas of Berlin...
, south of Hallesches Tor
Hallesches Tor (Berlin U-Bahn)
The underground station Hallesches Tor is part of the Berlin U-Bahn network at the intersection of the east-west bound U1 and the north-south bound U6 in the Kreuzberg district.-Overview:...
.