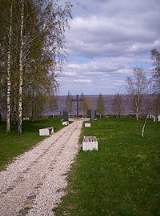 Encyclopedia
Army Group North was a German strategic echelon formation
Echelon formation
An echelon formation is a military formation in which members are arranged diagonally. Each member is stationed behind and to the right , or behind and to the left , of the member ahead...
commanding a grouping of Field Armies
Field army
A Field Army, or Area Army, usually referred to simply as an Army, is a term used by many national military forces for a military formation superior to a corps and beneath an army group....
subordinated to the OKH during World War II
World War II
World War II, or the Second World War , was a global conflict lasting from 1939 to 1945, involving most of the world's nations—including all of the great powers—eventually forming two opposing military alliances: the Allies and the Axis...
. The army group
Army group
An army group is a military organization consisting of several field armies, which is self-sufficient for indefinite periods. It is usually responsible for a particular geographic area...
coordinated the operations of attached separate army corps, reserve formations, rear services and logistics.

The Army Group North was created on the 2 September 1939 by reorganization of the 2nd Army Headquarters.

After completion of the Poland Campaign it was transferred to the Western Theatre and on the 10 October 1939 was renamed as the Army Group B
Army Group B
Army Group B was the name of three different German Army Groups that saw action during World War II.-Battle for France:The first was involved in the Western Campaign in 1940 in Belgium and the Netherlands which was to be aimed to conquer the Maas bridges after the German airborne actions in Rotterdam...
, and consisted of:

In preparation for Operation Barbarossa, Army Group North was reformed from Army Group C on 22 June 1941. Army Group North was commanded by Field Marshal Wilhelm Ritter von Leeb
Wilhelm Ritter von Leeb
Wilhelm Josef Franz Ritter von Leeb was a German Field Marshal during World War II. - Youth :...
and staged in East Prussia
East Prussia
East Prussia is the main part of the region of Prussia along the southeastern Baltic Coast from the 13th century to the end of World War II in May 1945. From 1772–1829 and 1878–1945, the Province of East Prussia was part of the German state of Prussia. The capital city was Königsberg.East Prussia...
. Its strategic goal was Leningrad
Leningrad
Leningrad is the former name of Saint Petersburg, Russia.Leningrad may also refer to:- Places :* Leningrad Oblast, a federal subject of Russia, around Saint Petersburg* Leningrad, Tajikistan, capital of Muminobod district in Khatlon Province...
, with operational objectives being the territories of the Baltic republics and securing the northern flank
Flanking maneuver
In military tactics, a flanking maneuver, also called a flank attack, is an attack on the sides of an opposing force. If a flanking maneuver succeeds, the opposing force would be surrounded from two or more directions, which significantly reduces the maneuverability of the outflanked force and its...
of Army Group Centre
Army Group Centre
Army Group Centre was the name of two distinct German strategic army groups that fought on the Eastern Front in World War II. The first Army Group Centre was created on 22 June 1941, as one of three German Army formations assigned to the invasion of the Soviet Union...
in Northern Russia between Western Dvina River and Daugavpils
Daugavpils
Daugavpils is a city in southeastern Latvia, located on the banks of the Daugava River, from which the city gets its name. Daugavpils literally means "Daugava Castle". With a population of over 100,000, it is the second largest city in the country after the capital Riga, which is located some...
-Kholm
Kholm
Kholm is a town and the administrative center of Kholmsky District of Novgorod Oblast, Russia, situated at the confluence of the Lovat and Kunya Rivers, north of Toropets, southwest of Staraya Russa, and south of Veliky Novgorod. Population:...
Army Group boundary. On commencement of the Wehrmacht's Baltic offensive operation the Army Group deployed into Lithuania and northern Belorussia.

It served mainly in Baltic territories and north Russia until 1944.

Its subordinate Armies were deployed with the following immediate objectives:

Demyansk Pocket
Demyansk Pocket
The Demyansk Pocket was the name given for the encirclement of German troops by the Red Army around Demyansk , south of Leningrad, during World War II on the Eastern Front. The pocket existed mainly from 8 February-21 April 1942. A much smaller pocket was simultaneously surrounded in Kholm, about ...

Commander in Chief 9 January 1944: GFM Walter Model
Walter Model
Otto Moritz Walter Model was a German general and later field marshal during World War II. He is noted for his defensive battles in the latter half of the war, mostly on the Eastern Front but also in the west, and for his close association with Adolf Hitler and Nazism...

March 1944
Battle of Narva
Battle of Narva (1944)
The Battle of Narva was a military campaign between the German Army Detachment "Narwa" and the Soviet Leningrad Front fought for possession of the strategically important Narva Isthmus on 2 February – 10 August 1944 during World War II....
, consisting of:
Combat in South Estonia, 1944
Combat in South Estonia, 1944
The Tartu Offensive Operation , also known as the Battle of Tartu and the Battle of Emajõgi was a campaign fought over southeastern Estonia in 1944. It took place on the Eastern Front during World War II between the Soviet 3rd Baltic Front and parts of the German Army Group North.The Soviet...

Battle of Memel
Battle of Memel
The Battle of Memel or the Siege of Memel took place when the Soviets launched their Memel Offensive Operation in late 1944. The offensive led to a three-month siege against German forces in a small bridgehead in the town and its port....

Army Group North (old Army Group Centre), was driven into an ever smaller pocket around Königsberg
Battle of Königsberg
The Battle of Königsberg , was one of the last operations of the East Prussian Offensive during World War II. In four days of violent urban warfare, Soviet forces of the 1st Baltic Front and the 3rd Belorussian Front captured the city of Königsberg...
in East Prussia
East Prussia
East Prussia is the main part of the region of Prussia along the southeastern Baltic Coast from the 13th century to the end of World War II in May 1945. From 1772–1829 and 1878–1945, the Province of East Prussia was part of the German state of Prussia. The capital city was Königsberg.East Prussia...
. On April 9, 1945 Königsberg finally fell to the Red Army, although remnants of Army Group units continued to resist on the Heiligenbeil
Heiligenbeil
The term Heiligenbeil can refer to:*The German name of Mamonovo, Russia*Heiligenbeil concentration camp built near Mamonovo*Heiligenbeil Pocket, part of the Eastern Front of World War II...
& Danzig
Gdansk
Gdańsk is a Polish city on the Baltic coast, at the centre of the country's fourth-largest metropolitan area.The city lies on the southern edge of Gdańsk Bay , in a conurbation with the city of Gdynia, spa town of Sopot, and suburban communities, which together form a metropolitan area called the...
beachheads until the end of the war in Europe.

Commander in Chief 12 March 1945: Walter Weiss
Walter Weiß
General Walter-Otto Weiß was a Wehrmacht High Command officer in World War II. He became Commander in Chief of Army Group North on the Eastern Front in 1945. He was also a recipient of the Knight's Cross of the Iron Cross with Oak Leaves...