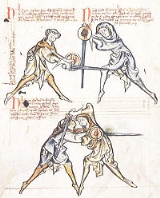 These arming swords stand in contrast to what Oakeshott calls the 'great swords' in reference to their longer and broader blades, and calls the hand-and-half swords in reference to their longer grip, namely the subtypes XIIa and XIIIa that were in use simultaneously with the arming swords in the latter part of the High Middle Ages, ca. 1250-1350. He notes these subtypes as the progenitors of the later two-handed longsword
Longsword
The longsword is a type of European sword designed for two-handed use, current during the late medieval and Renaissance periods, approximately 1350 to 1550 .Longswords have long cruciform hilts with grips over 10 to 15 cm length The longsword (of which stems the variation called the bastard...
s of the Late Middle Ages
Late Middle Ages
The Late Middle Ages was the period of European history generally comprising the 14th to the 16th century . The Late Middle Ages followed the High Middle Ages and preceded the onset of the early modern era ....
, in use ca. 1350-1550. For this reason, scholars occasionally refer to these greatswords improperly and anachronistically as 'longswords'. By contrast, the arming sword will evolve into the later 'shortsword' worn as a sidearm while wielding the two-handed longsword.

Typically used with a shield
Shield
A shield is a type of personal armor, meant to intercept attacks, either by stopping projectiles such as arrows or redirecting a hit from a sword, mace or battle axe to the side of the shield-bearer....
or buckler
Buckler
A buckler is a small shield, 15 to 45 cm in diameter, gripped in the fist; it was generally used as a companion weapon in hand-to-hand combat during the Medieval and Renaissance, as its size made it poor protection against missile weapons but useful in deflecting the blow of...
, the arming sword was the standard military sword of the knight (merely called a "war sword", an ambiguous title given to many types of swords carried for battle) until technological changes led to the rise of the longsword
Longsword
The longsword is a type of European sword designed for two-handed use, current during the late medieval and Renaissance periods, approximately 1350 to 1550 .Longswords have long cruciform hilts with grips over 10 to 15 cm length The longsword (of which stems the variation called the bastard...
in the late 13th century. There are many texts and pictures depicting effective arming sword combat without the benefit of a shield. According to Medieval texts, in the absence of a shield the empty (normally left) hand could be used for grabbing or grappling opponents. The arming sword was overall a light, versatile weapon capable of both cut and thrust combat; and normally boasts excellent balance. Although a variety of designs fall under the heading of 'arming sword', they are most commonly recognized as single-handed double-edged swords that were designed more for cutting than thrusting.
Although arming swords have been found with a variety of blade-lengths (measuring from 23 inches recorded in Ewart Oakeshott's Records of the Medieval Sword to an impressive 39, also recorded in the aforementioned text) most 12th-14th century blades seem to vary between 30 and 32 inch blades.
As a rule, arming swords began to polarize in design forms from the late 12th century, becoming either increasingly squat and heavily pointed, or longer and heavier in design.

It is a common weapon in period artwork, and there are many surviving examples in museums. The arming sword was worn by a knight even when not in armor, and he would be considered 'undressed' for public if he were without it. The first longswords were actually little more than two-handed arming swords, but the difference in length grew substantially as time passed. Long after these larger weapons came into use, the arming sword was retained as a common sidearm, eventually evolving into the cut & thrust swords
Side-sword
The spada da lato or "side-sword" is the Italian term for the type of sword popular during the late 16th century, corresponding to the Spanish espada ropera....
of the Renaissance
Renaissance
The Renaissance was a cultural movement that spanned roughly the 14th to the 17th century, beginning in Italy in the Late Middle Ages and later spreading to the rest of Europe. The term is also used more loosely to refer to the historical era, but since the changes of the Renaissance were not...
.

Arming swords are sometimes referred to as longsword
Longsword
The longsword is a type of European sword designed for two-handed use, current during the late medieval and Renaissance periods, approximately 1350 to 1550 .Longswords have long cruciform hilts with grips over 10 to 15 cm length The longsword (of which stems the variation called the bastard...
s or broadsword
Basket-hilted sword
The basket-hilted sword is the name of a group of early modern sword types characterized by a basket-shaped guard that protects the hand. The basket hilt is a development of the quillons added to swords' crossguards since the Late Middle Ages...
s (the former specifically referring to a long-bladed "hand and a half" sword and the latter to a type of broad-bladed basket-hilted sword popular in the 17th and 18th centuries).
The source of this article is wikipedia, the free encyclopedia.  The text of this article is licensed under the GFDL.