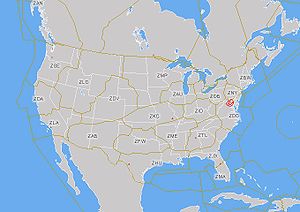 In air traffic control
Air traffic control
Air traffic control is a service provided by ground-based controllers who direct aircraft on the ground and in the air. The primary purpose of ATC systems worldwide is to separate aircraft to prevent collisions, to organize and expedite the flow of traffic, and to provide information and other...
, an Area Control Center (ACC), also known as a Center, is a facility responsible for controlling instrument flight rules
Instrument flight rules
Instrument flight rules are one of two sets of regulations governing all aspects of civil aviation aircraft operations; the other are visual flight rules ....
aircraft en route in a particular volume of airspace
Airspace
Airspace means the portion of the atmosphere controlled by a country above its territory, including its territorial waters or, more generally, any specific three-dimensional portion of the atmosphere....
(a Flight Information Region
Flight Information Region
In aviation a flight information region is a region of airspace with specific dimensions, in which a flight information service and an alerting service are provided. It is the largest regular division of airspace in use in the world today....
) at high altitudes between airport approaches and departures. In the United States, such a Center is referred to as an Air Route Traffic Control Center (ARTCC).

A Center typically accepts traffic from, and ultimately passes traffic to, the control of a Terminal Control Center
Terminal Control Center
A terminal radar approach control is an air traffic control facility usually located within the vicinity of a large airport. Typically, the TRACON controls aircraft within a 20-50 nautical mile radius of the major airport and a number of "satellite airports" between surface and up to between and...
or of another Center. Most Centers are operated by the national governments of the countries in which they are located. The general operations of Centers worldwide, and the boundaries of the airspace each Center controls, are governed by the ICAO
International Civil Aviation Organization
The International Civil Aviation Organization , pronounced , , is a specialized agency of the United Nations. It codifies the principles and techniques of international air navigation and fosters the planning and development of international air transport to ensure safe and orderly growth...
.

The United States Federal Aviation Administration defines an ARTCC as

[a] facility established to provide air traffic control service to aircraft operating on IFR flight plans within controlled airspace, principally during the en route phase of flight. When equipment capabilities and controller workload permit, certain advisory/assistance services may be provided to VFR
Visual flight rules
Visual flight rules are a set of regulations which allow a pilot to operate an aircraft in weather conditions generally clear enough to allow the pilot to see where the aircraft is going. Specifically, the weather must be better than basic VFR weather minimums, as specified in the rules of the...
aircraft.

An ARTCC is the U.S. equivalent of an Area Control Center (ACC).


Subdivision of airspace into sectors

The Flight Information Region controlled by a Center may be further administratively subdivided into Areas comprising two to seven sectors. Each Area is staffed by a set of controllers trained on all the sectors in that area.

Sectors use a distinct radio frequencies for communication with aircraft. Each sector also has secure landline communications with adjacent sectors, approach controls, areas, ARTCCs, flight service centers, and military aviation control facilities. These landline communications are shared among all sectors who need them and are available on a first-come, first-serve basis. Aircraft passing from one sector to another shall be handed off and requested to change frequencies to contact the next sector controller. Sector boundaries are specified by an aeronautical chart
Aeronautical chart
An aeronautical chart is a map designed to assist in navigation of aircraft, much as nautical charts do for watercraft, or a roadmap for drivers...
.

Air traffic controller
Air traffic controller
Air traffic controllers are the people who expedite and maintain a safe and orderly flow of air traffic in the global air traffic control system. The position of the air traffic controller is one that requires highly specialized skills...
s working within a Center communicate via radio
Radio
Radio is the transmission of signals through free space by modulation of electromagnetic waves with frequencies below those of visible light. Electromagnetic radiation travels by means of oscillating electromagnetic fields that pass through the air and the vacuum of space...
with pilots of instrument flight rules aircraft passing through the Center's airspace. A Center's communication frequencies (typically in the very high frequency
Very high frequency
Very high frequency is the radio frequency range from 30 MHz to 300 MHz. Frequencies immediately below VHF are denoted High frequency , and the next higher frequencies are known as Ultra high frequency...
amplitude modulation
Amplitude modulation
Amplitude modulation is a technique used in electronic communication, most commonly for transmitting information via a radio carrier wave. AM works by varying the strength of the transmitted signal in relation to the information being sent...
aviation bands
Airband
Airband or Aircraft band is the name for a group of frequencies in the VHF radio spectrum allocated to radio communication in civil aviation, sometimes also referred to as VHF, or phonetically as "Victor"...
, 118 MHz to 137 MHz, for overland control) are published in aeronautical charts and manuals, and will also be announced to a pilot by the previous controller during a hand-off.

Controllers use radar
Radar
Radar is an object-detection system which uses radio waves to determine the range, altitude, direction, or speed of objects. It can be used to detect aircraft, ships, spacecraft, guided missiles, motor vehicles, weather formations, and terrain. The radar dish or antenna transmits pulses of radio...
to monitor the progress of flights and instruct aircraft to perform course adjustments as needed to maintain separation
Separation (air traffic control)
In air traffic control, separation is the name for the concept of keeping an aircraft outside a minimum distance from another aircraft to reduce the risk of those aircraft colliding, as well as prevent accidents due to wake turbulence....
from other aircraft. Aircraft with Center contact can be readily distinguished by their transponders. Pilots may request altitude adjustments or course changes for reasons including avoidance of turbulence
Turbulence
In fluid dynamics, turbulence or turbulent flow is a flow regime characterized by chaotic and stochastic property changes. This includes low momentum diffusion, high momentum convection, and rapid variation of pressure and velocity in space and time...
or adverse weather
Weather
Weather is the state of the atmosphere, to the degree that it is hot or cold, wet or dry, calm or stormy, clear or cloudy. Most weather phenomena occur in the troposphere, just below the stratosphere. Weather refers, generally, to day-to-day temperature and precipitation activity, whereas climate...
conditions.

Controllers can assign routing relative to location fixes derived from latitude
Latitude
In geography, the latitude of a location on the Earth is the angular distance of that location south or north of the Equator. The latitude is an angle, and is usually measured in degrees . The equator has a latitude of 0°, the North pole has a latitude of 90° north , and the South pole has a...
and longitude
Longitude
Longitude is a geographic coordinate that specifies the east-west position of a point on the Earth's surface. It is an angular measurement, usually expressed in degrees, minutes and seconds, and denoted by the Greek letter lambda ....
, or from radionavigation beacons such as VORs
VHF omnidirectional range
VOR, short for VHF omnidirectional radio range, is a type of radio navigation system for aircraft. A VOR ground station broadcasts a VHF radio composite signal including the station's identifier, voice , and navigation signal. The identifier is typically a two- or three-letter string in Morse code...
. See also Airway
Airway (aviation)
In aviation, an airway is a designated route in the air. Airways are laid out between navigational aids such as VORs, NDBs and Intersections ....
; VORs, Airways and the Enroute Structure.

Some Centers have ICAO-designated responsibility for airspace located over an ocean
Ocean
An ocean is a major body of saline water, and a principal component of the hydrosphere. Approximately 71% of the Earth's surface is covered by ocean, a continuous body of water that is customarily divided into several principal oceans and smaller seas.More than half of this area is over 3,000...
such as ZOA, the majority of which is international airspace. Because substantial volumes of oceanic airspace lie beyond the range of ground-based radars, oceanic airspace controllers have to estimate the position of an airplane from pilot reports and computer models (procedural control
Procedural control
Procedural control is a method of providing air traffic control services without the use of radar. It is used in regions of the world, specifically sparsely-populated land areas and oceans, where radar coverage is either prohibitively expensive or is simply not feasible...
), rather than observing the position directly (radar control
Radar control
Radar control is a method of providing air traffic control services with the use of radar and Automatic Dependent Surveillance . The provision of air traffic control services without the use of radar is called procedural control.-Separation:...
, also known as positive control). Pilots flying over an ocean can determine their own positions accurately using the Global Positioning System
Global Positioning System
The Global Positioning System is a space-based global navigation satellite system that provides location and time information in all weather, anywhere on or near the Earth, where there is an unobstructed line of sight to four or more GPS satellites...
and can supply periodic updates to a Center. See also Air traffic control: Radar Coverage.

A Center's control service for an oceanic FIR
Flight Information Region
In aviation a flight information region is a region of airspace with specific dimensions, in which a flight information service and an alerting service are provided. It is the largest regular division of airspace in use in the world today....
may be operationally distinct from its service for a domestic overland FIR over land, employing different communications frequencies, controllers, and a different ICAO code.

Pilots typically use high frequency
High frequency
High frequency radio frequencies are between 3 and 30 MHz. Also known as the decameter band or decameter wave as the wavelengths range from one to ten decameters . Frequencies immediately below HF are denoted Medium-frequency , and the next higher frequencies are known as Very high frequency...
radio instead of very high frequency radio to communicate with a Center when flying over the ocean, because of HF's relatively greater propagation
Wave propagation
Wave propagation is any of the ways in which waves travel.With respect to the direction of the oscillation relative to the propagation direction, we can distinguish between longitudinal wave and transverse waves....
over long distances.
The source of this article is wikipedia, the free encyclopedia.  The text of this article is licensed under the GFDL.