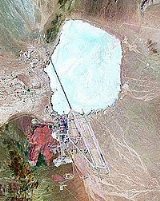 Overview
Area 51 is a military base
Military base
A military base is a facility directly owned and operated by or for the military or one of its branches that shelters military equipment and personnel, and facilitates training and operations. In general, a military base provides accommodations for one or more units, but it may also be used as a...
, and a remote detachment of Edwards Air Force Base
Edwards Air Force Base
Edwards Air Force Base is a United States Air Force base located on the border of Kern County, Los Angeles County, and San Bernardino County, California, in the Antelope Valley. It is southwest of the central business district of North Edwards, California and due east of Rosamond.It is named in...
. It is located in the southern portion of Nevada
Nevada
Nevada is a state in the western, mountain west, and southwestern regions of the United States. With an area of and a population of about 2.7 million, it is the 7th-largest and 35th-most populous state. Over two-thirds of Nevada's people live in the Las Vegas metropolitan area, which contains its...
in the western United States
United States
The United States of America is a federal constitutional republic comprising fifty states and a federal district...
, 83 miles (133 km) north-northwest of downtown Las Vegas
Las Vegas, Nevada
Las Vegas is the most populous city in the U.S. state of Nevada and is also the county seat of Clark County, Nevada. Las Vegas is an internationally renowned major resort city for gambling, shopping, and fine dining. The city bills itself as The Entertainment Capital of the World, and is famous...
. Situated at its center, on the southern shore of Groom Lake
Groom Lake
Groom Lake is a salt flat in Nevada used for runways of the Nellis Bombing Range Test Site airport on the north of the Area 51 USAF military installation. The lake at elevation is ~ from north to south and from east to west at its widest point...
, is a large military airfield. The base's primary purpose is to support development and testing of experimental aircraft and weapons systems.

What departments from the State of Nevada contracted to the site

When it all came to a end