Encyclopedia
Ardee is a town and townland
Townland
A townland or bally is a small geographical division of land used in Ireland. The townland system is of Gaelic origin—most townlands are believed to pre-date the Norman invasion and most have names derived from the Irish language...
in County Louth
County Louth
County Louth is a county of Ireland. It is part of the Border Region and is also located in the province of Leinster. It is named after the town of Louth. Louth County Council is the local authority for the county...
, Ireland
Republic of Ireland
Ireland , described as the Republic of Ireland , is a sovereign state in Europe occupying approximately five-sixths of the island of the same name. Its capital is Dublin. Ireland, which had a population of 4.58 million in 2011, is a constitutional republic governed as a parliamentary democracy,...
. It is located at the intersection of the N2, N52, and N33
N33 road
The N33 road is a national primary road in Ireland. It provides a link road in County Louth between the N2 Dublin-Derry , M1 Dublin-Belfast, and Ardee-Dunleer routes. The route connects to the N2 and N52 near Ardee, and connects to a junction on the M1 along the Dunleer Bypass almost directly east...
roads
Roads in Ireland
The island of Ireland, comprising Northern Ireland and the Republic of Ireland, has an extensive network of tens of thousands of kilometres of public roads, usually surfaced. These roads have been developed and modernised over centuries, from trackways suitable only for walkers and horses, to...
. Ardee is on the banks of the River Dee
River Dee, County Louth
The River Dee is a river in Ireland, which springs near Bailieboro in County Cavan and flows in an easterly direction for over 30 miles through County Meath and County Louth before entering the River Glyde at the village of Annagassan. The Dee is a tributary of the River Glyde and has three main...
and is approximately 20 km (12 mi) from Dundalk
Dundalk
Dundalk is the county town of County Louth in Ireland. It is situated where the Castletown River flows into Dundalk Bay. The town is close to the border with Northern Ireland and equi-distant from Dublin and Belfast. The town's name, which was historically written as Dundalgan, has associations...
, Drogheda
Drogheda
Drogheda is an industrial and port town in County Louth on the east coast of Ireland, 56 km north of Dublin. It is the last bridging point on the River Boyne before it enters the Irish Sea....
, Slane
Slane
Slane is a village in County Meath, in Ireland. The village stands on a steep hillside on the left bank of the River Boyne at the intersection of the N2 and the N51 . In 2006 Slane's population was 1,099, having grown from 823 in 2002. The population of the village and the surrounding rural area...
and Carrickmacross
Carrickmacross
Carrickmacross or Carrickmacros is a town in County Monaghan, Ireland. The town and environs had a population of 4,387 according to the 2006 census, making it the second largest town in the county. The town won the prestigious European Entente Florale Silver Medal Award. It is a market town which...
. It currently has a population of about 5000.

Originally called Atherdee, its name is derived from the Irish Áth Fhirdia (the Ford of Ferdia), from the mythological four day battle between Cúchulainn
Cúchulainn
Cú Chulainn or Cúchulainn , and sometimes known in English as Cuhullin , is an Irish mythological hero who appears in the stories of the Ulster Cycle, as well as in Scottish and Manx folklore...
and Ferdia, for the defence of Ulster from Queen Maeve of Connacht. Ferdia fell after four days of battle and is buried on the southern banks of the river alongside the Riverside Walk. Ardee Castle in the town (St. Leger's) is the largest fortified medieval tower house in Ireland.

An eight km (five miles) railway line once linked the town to the main Dublin - Belfast
Belfast
Belfast is the capital of and largest city in Northern Ireland. By population, it is the 14th biggest city in the United Kingdom and second biggest on the island of Ireland . It is the seat of the devolved government and legislative Northern Ireland Assembly...
line. The station
Ardee railway station
Ardee was a railway station which served Ardee in County Louth, Ireland. It was the terminus of a branch which diverged from the Dublin-Belfast railway line at Dromin Junction.-History:...
opened on 1 August, 1896 and passenger services ended on 3 June, 1934. The line continued as a freight service until finally closed on 3 November, 1976, serving the local fertiliser factory and livestock transport. The trackbed was lifted in the late 1980s, and much of the short route is now a designated walkway.

The river Dee was the northern border of The Pale
The Pale
The Pale or the English Pale , was the part of Ireland that was directly under the control of the English government in the late Middle Ages. It had reduced by the late 15th century to an area along the east coast stretching from Dalkey, south of Dublin, to the garrison town of Dundalk...
in medieval times.

Also of note is "Jumping Church" which is located about five km (three miles) outside the town. Legend has it that a non-Christian was buried inside the Church walls and that later that night, the Church jumped so as to leave his remains outside of the sacred ground. 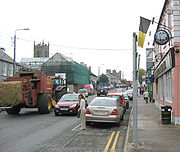 Ardee has grown much in the last ten years, mainly as a result of easy access to new roads including the M1 motorway which links Dublin to Belfast. The development of the town resulted in a dramatic rise in house prices in the area.

The Norman castle in Ardee has been recently refurbished and used to house the district courthouse, which is now housed in the new Civic Offices Complex at the Fairgreen.

A festival for Ardee was launched in 2009 titled the "The Turfman Festival". It is held on the August bank holiday weekend with numerous of events happening on the street from singing to face painting.

Now the town of Ardee is twinned with the town of Nettuno, Italy. The twinning agreement was signed in 2010 by their respective mayors Jim Tenanty and Alessio Chiavetta.

Golf: Ardee has an 18-hole golf course with a recently improved clubhouse.

GAA: "St. Marys GAA club" competes in the senior level of Louth GAA
Louth GAA
The Louth County Board of the Gaelic Athletic Association or Louth GAA is one of the 32 county boards of the GAA in Ireland, and is responsible for Gaelic games in County Louth. The county board is also responsible for the Louth inter-county teams....
competition. It was established in 1928. Other Clubs such as Hunterstown Rovers
Hunterstown Rovers
Hunterstown Rovers is a County Louth based Gaelic Athletic Association club that competes in the Avonmore Louth Junior Championship.The club's pitch is located about 3 kilometres south of Ardee on the Drogheda Road....
, John Mitchells and Sean McDermott's are in very close proximity to Ardee. Hunterstown Rovers has two adult and several juvenile teams. The senior team competes in the Intermediate Championship. Hunterstown's floodlit Pitch is located just south of Ardee on the N2.

Soccer: Recently developed at Townparks, just outside Ardee are the new home grounds of Ardee Celtic. The ground features two full size sand-based pitches and a seven-a-side underage pitch, dressing rooms and covered spectator area. The club has 18 underage teams and three senior sides. Other teams include Square United and Newtown United. They play in the Meath & District League

Athletics: Ardee & District Athletic Club caters for male and female members from the age of six up to Veterans. Athletes compete in the various athletic disciplines (Track & Field, Cross Country, Indoors and Road Racing) at local, national and international level.

Tennis: is located on the grounds of the community school has over 200 members. The club caters for ages six and up and has four floodlit artificial grass courts.

Rugby: Ardee Rugby Club is located in Townspark, Ardee, and was founded in 1980. It has male, female and youth squads. A recent redevelopment has added a gym and a sauna.

Chess The Ardee chess team team won the National Chess Championship (NCC) 3 times in a row from 1972 to 1974 and is still active.

Concert Band: The Ardee Concert Band is the oldest organisation in the town with a history spanning some 150 years.

Annual Music Festival: The Ardee Baroque Festival
Ardee Baroque Festival
Now in its fifth year, the Ardee Baroque Festival is a showcase of baroque music that takes place each November in the historic market town of Ardee, County Louth, Republic Of Ireland....
celebrated its sixth annual season in 2009. Run by Louth County Council's Arts Office, the festival receives grants from the Arts Council and commercial sponsorship to bring national and international musicians to Ardee.