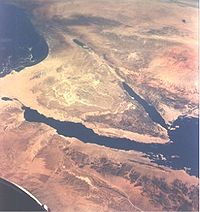 The Arava Institute for Environmental Studies is an accredited academic program for undergraduate and graduate studies located at Kibbutz
Kibbutz
A kibbutz is a collective community in Israel that was traditionally based on agriculture. Today, farming has been partly supplanted by other economic branches, including industrial plants and high-tech enterprises. Kibbutzim began as utopian communities, a combination of socialism and Zionism...
Ketura
Ketura (Kibbutz)
Ketura is a kibbutz north of Eilat in the Arabah rift valley. "Ketura" is the name of a hill nearby and the name of the second wife of Abraham . It has approximately 130 members and 150 children...
on the Israel
Israel
The State of Israel is a parliamentary republic located in the Middle East, along the eastern shore of the Mediterranean Sea...
i side of the Arava
Arabah
The Arabah , also known as Aravah, is a section of the Great Rift Valley running in a north-south orientation between the southern end of the Sea of Galilee down to the Dead Sea and continuing further south where it ends at the Gulf of Aqaba. It includes most of the border between Israel to the...
Valley. It seeks to train future leaders of the Middle East
Middle East
The Middle East is a region that encompasses Western Asia and Northern Africa. It is often used as a synonym for Near East, in opposition to Far East...
in environmental issues so that they will be able to cooperate in solving regional environmental problems.
Environmental peacebuilding
Peacebuilding is both the theory and practice of identifying the conditions that can lead to a sustainable peace between those who have previously been adversaries, and assisting adversaries to move towards a sustainable peace. Environmental peacebuilding examines and advocates environmental...

Kibbutz Ketura is one of a small number of intentional communities in Israel, and that makes it an ideal setting for a culturally diverse program. Members of the Kibbutz are both religious and non-religious Jews who have chosen to live together in the same community and maintain an egalitarian synagogue. The kibbutz is also a member of Israel's Green Kibbutzim movement, which seeks to promote environmentally friendly and sustainable practices. A portion of the kibbutz's agricultural produce is organic.

Students at the Arava Institute live on Kibbutz Ketura while taking classes in sustainable development, water management, environmental law, economic policy, environmental science, and other topics in environmental studies. Classes are taught in English. Members of the faculty are often guest lecturers from universities, both in Israel and abroad, or professionals in fields such as public policy and water management.

Students come from around the world to study and conduct research at the Arava Institute. Since its founding in 1996, the Arava Institute has hosted over 400 graduate and undergraduate students of various nationalities, including Israeli Jewish, Israeli Arab, Palestinian, Jordanian, Egyptian, Tunisian, European and American students. The Arava Institute has been able to maintain a diverse student body even during very difficult times elsewhere in Israel and the Middle East.

Students can participate in semester and year-long programs accredited through Ben Gurion University as well as two Master’s degree graduate programs granted by Ben-Gurion University – one in Environmental Desert Studies and the other a “Green” MBA that teaches environmental sustainability and efficiency as well as business management skills. A three-week summer course is sometimes offered to study biodiversity and environmental challenges in the Arava Valley. The Arava Institute is considering establishing a joint Master’s program with Al-Quds University, the only Arab institution of higher learning in Jerusalem. All students are required to participate in a Peace-Building and Environmental Leadership Seminar, which provides them with a facilitated forum for expressing their views on race, religion, identity, and the political situation.

Over 75% of Arava Institute graduates are working in the environmental or peacebuilding field. The Institute has created an alumni network to continue supporting alumni by providing personal and professional contacts as well as seed money for alumni projects that demonstrate cross-cultural cooperation. Several alumni of the institute have gone on to work in cross-cultural projects.

others are working in NGO's working on solutions to hygiene and energy in rural and poor areas, working on environmental education and awareness, activists in peace related activities and more.

The Arava Institute has recently added a new network to build more connections between alumni. Called AAPEN or the Arava Alumni Peace and Environmental Network, AAPEN brings together alumni from all years of study during an annual conference (most recently held in Aqaba, Jordan), as well as an online presence on facebook, a private online network (NING), updated pages on the Arava website for alumni, a newsletter, and more.

In addition to its academic programs, the Arava Institute conducts ecological research in the desert environment. Its Environmental Policy and Research Center has established trans-boundary projects with the Palestinian Authority, Jordan, and Morocco in the areas of Bio-Diversity, Air Quality, Stream Restoration, Sustainable Agriculture in Arid Lands, and Sustainable Futures for the Dead Sea Basin.

At the Center for Sustainable Agriculture, important research is being conducted on water-saving plants as well as endangered medicinal and biblical plants of the Dead Sea region. Recently the Center’s Director, Dr. Elaine Solowey, made international headlines for germinating a 2,000 year old seed of the Judean date palm found in excavations at Masada
Masada
Masada is the name for a site of ancient palaces and fortifications in the South District of Israel, on top of an isolated rock plateau, or horst, on the eastern edge of the Judean Desert, overlooking the Dead Sea. Masada is best known for the violence that occurred there in the first century CE...
.