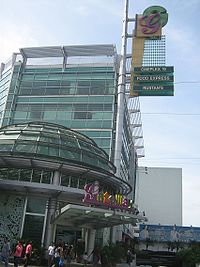 The Araneta Center is a 35-hectare commercial area in Quezon City
Quezon City
Quezon City is the former capital and the most populous city in the Philippines. Located on the island of Luzon, Quezon City is one of the cities and municipalities that make up Metro Manila, the National Capital Region. The city was named after Manuel L...
, Philippines. Araneta Center Inc. (ACI), controlled by the Araneta family, is the owner, developer and manager of Araneta Center, which brings in an estimated 1 million visitors daily. The centerpiece of the complex is the Araneta Coliseum (renamed Smart Araneta Coliseum in 2011), the largest entertainment venue in Asia with a seating capacity
Seating capacity
Seating capacity refers to the number of people who can be seated in a specific space, both in terms of the physical space available, and in terms of limitations set by law. Seating capacity can be used in the description of anything ranging from an automobile that seats two to a stadium that seats...
of 15,000. It opened as the world’s biggest indoor arena in 1960.
The Araneta Center is currently being redeveloped into a mixed-use area that will integrate residential and office buildings to a redeveloped shopping and entertainment complex. In 2004, ACI’s landmark project, the Gateway mall
Gateway Mall (Araneta Center)
Gateway Mall is a shopping mall complex located at Araneta Center, Cubao, Quezon City. Also underway at Araneta Center is a mall expansion and construction of the Gateway Tower. Gateway Mall has won some awards in terms of its mall design and tenant mix which made the mall to become the 2006-2007...
opened its doors to the public. Gateway forms part of the redesign of the Araneta Center. The Center itself is undergoing a massive 20-year redevelopment plan. Walkway structures for railway transit line commuters have been constructed to serve as an all-access way for shoppers to roam freely around the complex.

Gateway Mall
Gateway Mall (Araneta Center)
Gateway Mall is a shopping mall complex located at Araneta Center, Cubao, Quezon City. Also underway at Araneta Center is a mall expansion and construction of the Gateway Tower. Gateway Mall has won some awards in terms of its mall design and tenant mix which made the mall to become the 2006-2007...
comprises five levels of shopping, dining and entertainment. Gateway has 10 cinemas with digital sound and full stadium seating including the first La-Z-Boy
La-Z-Boy
La-Z-Boy Incorporated is a furniture manufacturer based in Monroe, Michigan, USA which makes home furniture, including upholstered recliners, sofas, stationary chairs, and sleeper sofas...
theater in the country; “The Oasis,” a one-of-a-kind interior floating garden open to the sky; and the Fabergé Egg-like “Pavilion” which serves as Gateway’s ceremonial entrance.

The Gateway Tower is a 30 level office skyscraper adjacent to and directly connected on 4 levels to the award-winning Gateway Mall.

Aside from its location, The Gateway Tower will possess 80,000 square meters of office space, ceilings that exceed the height of most other office buildings, as well as 5 levels of retail and 3 levels of basement parking.

Farmers Plaza is Araneta Center’s gateway to EDSA. Renovated and expanded in 1999, the five-level complex is the first ever commercial condominium in the Philippines. Farmers Plaza offers 60,400 square meters of prime retail space occupied by cheap merchandise outlets.

A 5-level shopping complex with a mix of international and local shops, dining outlets and entertainment facilities.Farmers Plaza

Farmers Market is a market selling fresh produce and other goods. It has a total floor area of 12,000 square meters.

Commanding a view of the metropolis is the 22-level Aurora Tower. It offers an 18-storey commercial/office space, underground parking, a helipad and penthouse. The Isetann Department Store occupies the building’s first seven floors. The Araneta Group’s headquarters occupies the four top floors.

Soon to rise on the South East quadrant of the Araneta Coliseum is Novotel Manila Araneta Center, a deluxe business hotel connected to Gateway Mall. Located in the center of the business and entertainment districts of Quezon City, the hotel will have 417 rooms, a 1,000 capacity ballroom, a gym, a bar lounge. Plus all-day dining, spa, swimming pools, and 3 levels of basement parking. The hotel will also offer function rooms.

Integrated into the whole development will be an information technology backbone that will provide communications, networks, utilities, and other technology support facilities.