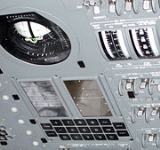 Overview
The Apollo Guidance Computer (AGC) provided onboard computation and control for guidance, navigation, and control of the Command Module (CM) and Lunar Module (LM) spacecraft of the Apollo program. It is notable for having been one of the first IC
Integrated circuit
An integrated circuit or monolithic integrated circuit is an electronic circuit manufactured by the patterned diffusion of trace elements into the surface of a thin substrate of semiconductor material...
-based computers.

The AGC and its DSKY user interface were developed in the early 1960s for the Apollo program by the MIT Instrumentation Laboratory.

Each flight to the Moon (with the exception of Apollo 8, which didn't take a Lunar Module on its lunar orbit mission) had two AGCs, one each in the Command Module
Apollo Command/Service Module
The Command/Service Module was one of two spacecraft, along with the Lunar Module, used for the United States Apollo program which landed astronauts on the Moon. It was built for NASA by North American Aviation...
and the Lunar Module
Apollo Lunar Module
The Apollo Lunar Module was the lander portion of the Apollo spacecraft built for the US Apollo program by Grumman to carry a crew of two from lunar orbit to the surface and back...
.