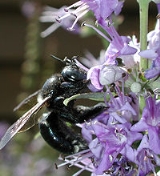 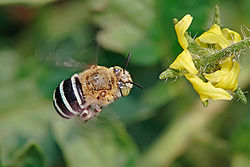 The Apidae are a large family of bee
Bee
Bees are flying insects closely related to wasps and ants, and are known for their role in pollination and for producing honey and beeswax. Bees are a monophyletic lineage within the superfamily Apoidea, presently classified by the unranked taxon name Anthophila...
s, comprising the common honey bee
Honey bee
Honey bees are a subset of bees in the genus Apis, primarily distinguished by the production and storage of honey and the construction of perennial, colonial nests out of wax. Honey bees are the only extant members of the tribe Apini, all in the genus Apis...
s, stingless bee
Stingless bee
Stingless bees, sometimes called stingless honey bees or simply meliponines, are a large group of bees, comprising the tribe Meliponini . They belong in the family Apidae, and are closely related to common honey bees, carpenter bees, orchid bees and bumblebees...
s (which are also cultured for honey), carpenter bee
Carpenter bee
Carpenter bees are large, hairy bees distributed worldwide. There are some 500 species of carpenter bee in 31 subgenera...
s, orchid bees
Euglossini
Euglossine bees, also called orchid bees, are the only group of corbiculate bees whose non-parasitic members do not all possess eusocial behavior. Most of the species are solitary, though a few are communal, or exhibit simple forms of eusociality...
, cuckoo bees
Nomadinae
The subfamily Nomadinae is the largest and most diverse group of cleptoparasitic "cuckoo bees" with 31 genera in 10 tribes; they occur worldwide, and utilize many different types of bees as hosts. As parasites, they lack a pollen-carrying scopa, and are often extraordinarily wasp-like in appearance...
, bumblebee
Bumblebee
A bumble bee is any member of the bee genus Bombus, in the family Apidae. There are over 250 known species, existing primarily in the Northern Hemisphere although they are common in New Zealand and in the Australian state of Tasmania.Bumble bees are social insects that are characterised by black...
s, and various other less well-known groups. The family Apidae presently includes all the genera that were previously classified in the families Anthophoridae and Ctenoplectridae, and most of these are solitary species, though a few are also cleptoparasites. The four groups that were subfamilies in the old family Apidae are presently ranked as tribes within the subfamily Apinae
Apinae
The Apinae is the subfamily that includes the majority of bees in the family Apidae, including the familiar "corbiculate" bees , plus all but two of the groups that were previously classified in the family Anthophoridae...
. This trend has been taken to its extreme in a few recent classifications that place all the existing bee families together under the name "Apidae" (or, alternatively, the non-Linnaean clade "Anthophila"), but this is not a widely-accepted practice.

The subfamily Apinae contains a diversity of lineages, the majority of which are solitary, and whose nests are simple burrows in the soil. However, honey bees, stingless bees, and bumblebees are colonial (eusocial), though they are sometimes believed to have each developed this independently, and show notable differences in such things as communication between workers and methods of nest construction. Xylocopines
Xylocopinae
The subfamily Xylocopinae occurs worldwide, and includes the familiar Carpenter bees and their more obscure relatives; there are many species, but relatively few genera...
(the subfamily which includes carpenter bees) are mostly solitary, though they tend to be gregarious, and some lineages such as the Allodapini
Allodapini
The Allodapini is a tribe of bees in the family Apidae, subfamily Xylocopinae, occurring throughout Africa, Southeast Asia, and Australasia.Many of the species in the tribe form small social colonies where a group of females cooperatively care for the developing larvae...
contain eusocial species; most members of this subfamily make nests in plant stems or wood. The nomadines
Nomadinae
The subfamily Nomadinae is the largest and most diverse group of cleptoparasitic "cuckoo bees" with 31 genera in 10 tribes; they occur worldwide, and utilize many different types of bees as hosts. As parasites, they lack a pollen-carrying scopa, and are often extraordinarily wasp-like in appearance...
are all cleptoparasites in the nests of other bees.