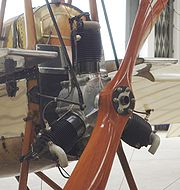 Anzani was an engine manufacturer founded by the Italian Alessandro Anzani (1877-1956), which produced proprietary
Property
Property is any physical or intangible entity that is owned by a person or jointly by a group of people or a legal entity like a corporation...
engines for aircraft
Aircraft
An aircraft is a vehicle that is able to fly by gaining support from the air, or, in general, the atmosphere of a planet. An aircraft counters the force of gravity by using either static lift or by using the dynamic lift of an airfoil, or in a few cases the downward thrust from jet engines.Although...
, cars
Automobile
An automobile, autocar, motor car or car is a wheeled motor vehicle used for transporting passengers, which also carries its own engine or motor...
, boats, and motorcycles in factories in Britain
United Kingdom
The United Kingdom of Great Britain and Northern IrelandIn the United Kingdom and Dependencies, other languages have been officially recognised as legitimate autochthonous languages under the European Charter for Regional or Minority Languages...
, France
France
The French Republic , The French Republic , The French Republic , (commonly known as France , is a unitary semi-presidential republic in Western Europe with several overseas territories and islands located on other continents and in the Indian, Pacific, and Atlantic oceans. Metropolitan France...
and Italy.

From his native Italy, Anzani moved to France where he became involved in cycle racing. He moved on to motor cycles and designed and built a record breaking lightweight engine. In 1907, he set up a small workshop in Paris with three staff and while they were building his engines, he designed a hydrofoil
Hydrofoil
A hydrofoil is a foil which operates in water. They are similar in appearance and purpose to airfoils.Hydrofoils can be artificial, such as the rudder or keel on a boat, the diving planes on a submarine, a surfboard fin, or occur naturally, as with fish fins, the flippers of aquatic mammals, the...
powered by one of his engines and propellers.

He supplied one of his engines to Enrico Forlanini
Enrico Forlanini
Enrico Forlanini was an Italian engineer, inventor and aeronautical pioneer, well known for his works on helicopters, aircraft, hydrofoils and dirigibles. He was born in Milan...
and developed it further into a three-cylinder, air cooled, radial engine
Radial engine
The radial engine is a reciprocating type internal combustion engine configuration in which the cylinders point outward from a central crankshaft like the spokes on a wheel...
ideal for the new aeroplanes. One of the early engines, the 25hp Anzani W-3 or Fan type, was supplied to Louis Blériot
Louis Blériot
Louis Charles Joseph Blériot was a French aviator, inventor and engineer. In 1909 he completed the first flight across a large body of water in a heavier-than-air craft, when he crossed the English Channel. For this achievement, he received a prize of £1,000...
who used it on his successful crossing of the English Channel
English Channel
The English Channel , often referred to simply as the Channel, is an arm of the Atlantic Ocean that separates southern England from northern France, and joins the North Sea to the Atlantic. It is about long and varies in width from at its widest to in the Strait of Dover...
in 1909.

Demand for the engines continued to grow and the original Paris workshop was replaced by a new factory at Courbevoie
Courbevoie
Courbevoie is a commune located very close to the centre of Paris, France. The centre of Courbevoie is situated 2 kilometres from the outer limits of Paris and 8.2 km...
, Paris, and one in London
London
London is the capital city of :England and the :United Kingdom, the largest metropolitan area in the United Kingdom, and the largest urban zone in the European Union by most measures. Located on the River Thames, London has been a major settlement for two millennia, its history going back to its...
was also added as well as licensed production by other makers. Another factory at Monza
Monza
Monza is a city and comune on the river Lambro, a tributary of the Po, in the Lombardy region of Italy some 15 km north-northeast of Milan. It is the capital of the Province of Monza and Brianza. It is best known for its Grand Prix motor racing circuit, the Autodromo Nazionale Monza.On June...
, Italy was added in 1914.

In 1920, Anzani turned to motor racing and built a small car with one of his 750 cc two cylinder engines, air cooled of course, which won several competitions. They also made a 1098cc cyclecar
Cyclecar
Cyclecars were small, generally inexpensive cars manufactured mainly between 1910 and the late 1920s.-General description:Cyclecars were propelled by single cylinder, V-twin or more rarely four cylinder engines, often air cooled. Sometimes these had been originally used in motorcycles and other...
between 1923 and 1924.

On his 50th birthday in 1927, Anzani decided to sell his factories in Paris and London, keeping only the Monza works for sentimental reasons, and managed by Natale Baccanti.

In the UK, British Anzani outsourced the manufacture of their engines to Coventry Ordnance Works Ltd
Coventry Ordnance Works
Coventry Ordnance Works was a British manufacturer of heavy guns, particularly naval artillery. The firm was based in the English city of Coventry.-History:...
. In the 1920s, it was refinanced as British Vulpine Engine Company, and then again as British Anzani Engineering Company, concentrating on small engines and car and motorcycle powerplants. They supplied AC Cars
AC Cars
AC Cars Group Ltd. formerly known as Auto Carriers Ltd. is a British specialist automobile manufacturer and one of the oldest independent car marques founded in Britain...
with the 1496cc side-valve four cylinder (that would become AC's famous 2-litre motor), Frazer-Nash with an 1496cc ohv engine, Morgan Motor Company
Morgan Motor Company
The Morgan Motor Company is a British motor car manufacturer. The company was founded in 1910 by Harry Frederick Stanley Morgan, generally known as "HFS" and was run by him until he died, aged 77, in 1959. Peter Morgan, son of H.F.S., ran the company until a few years before his death in 2003...
with a V-twin
V-twin
A V-twin engine is a two-cylinder internal combustion engine where the cylinders are arranged in a V configuration.- Crankshaft configuration :Most V-twin engines have a single crankpin, which is shared by both connecting rods...
, and Squire
Squire Car Manufacturing Company
The Squire Car Manufacturing Company was a British auto manufacturer of the 1930s based in Henley-on-Thames, Oxfordshire. Founded as Squire Motors Ltd by 21-year-old Adrian Squire , formerly of Bentley and MG, the company renamed as the Squire Car Manufacturing Company produced the Squire car,...
with the R1 twin cam engine. Berkeley Cars
Berkeley cars
Berkeley Cars Ltd of Biggleswade, Bedfordshire, England produced small economical sporting microcars with motorcycle-derived engines from 322 cc to 692 cc and front wheel drive between 1956 and 1960.-History:...
used small Anzani motorcycle engines in some models. Their most well known products came to be in motorcycles, lawnmowers and outboard engines. Cotton
Cotton (motorcycle)
The Cotton Motorcycle Company, was a British motorcycle manufacturer of 11a Bristol Road, Gloucester, and was founded by Frank Willoughby Cotton in 1918. F.W. presided over the company until his retirement in 1953. The company was reconstituted as E. Cotton Ltd, and traded till 1980.-The...
and Greeves
Greeves (motorcycles)
Greeves Motorcycles Ltd is a British motorcycle manufacturer producing motorcycles mainly for the trials and off-road market. Owner Richard Deal bought the rights to the Greeves name in May 1999. The original company had been producing motorcycles since 1952, funded by a contract with the...
motorcycles used Anzani motors.

In later years, the company diversified. In the years after World War II
World War II
World War II, or the Second World War , was a global conflict lasting from 1939 to 1945, involving most of the world's nations—including all of the great powers—eventually forming two opposing military alliances: the Allies and the Axis...
, the company's main product was the 'Iron Horse' - a two-wheeled pedestrian-controlled ploughing engine and light tractor. In time, four-wheeled versions with the driver sitting on the front of the vehicle were produced. The company became the British Anzani Group, and was trading under that name when it went into liquidation in 1980.

The trademark 'British Anzani' was re-registered in 2003 and the company, Anzani Ltd, in 2006. The company is supplying classic spares through Dolphin Engines of Launceston (Cornwall, UK) and is planning a return to the automotive, marine and transport industries, with products designed by Bo Zolland.