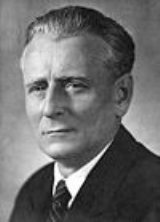 Antonín Novotný became a member of the Communist party in 1921. He later worked as a delegate to the 7th congress of Comintern (1935). Due to his involvement in the party's underground struggle, he was arrested in 1941 and imprisoned in the Mauthausen concentration camp
Mauthausen-Gusen concentration camp
Mauthausen Concentration Camp grew to become a large group of Nazi concentration camps that was built around the villages of Mauthausen and Gusen in Upper Austria, roughly east of the city of Linz.Initially a single camp at Mauthausen, it expanded over time and by the summer of 1940, the...
where he served as Kapo
Kapo (concentration camp)
A kapo was a prisoner who worked inside German Nazi concentration camps during World War II in any of certain lower administrative positions. The official Nazi word was Funktionshäftling, or "prisoner functionary", but the Nazis commonly referred to them as kapos.- Etymology :The origin of "kapo"...
. He was liberated by American troops on 5 May 1945.

While President Antonín Zápotocký
Antonín Zápotocký
Antonín Zápotocký was communist Prime Minister of Czechoslovakia from 1948 to 1953 and President of Czechoslovakia from 1953 to 1957....
and Prime Minister Viliam Široký
Viliam Široký
Viliam Široký was a prominent Communist politician of Czechoslovakia, the Prime Minister from 1953 to 1963, and briefly serving as the acting President of Czechoslovakia following the death of Antonín Zápotocký from 13 November to 19 November 1957. He also served as the leader of the Communist...
wanted a less repressive way of governing, Novotný was able to outflank them because he had the backing of the Soviet Union
Soviet Union
The Soviet Union , officially the Union of Soviet Socialist Republics , was a constitutionally socialist state that existed in Eurasia between 1922 and 1991....
. In late 1953, at a meeting in Moscow
Moscow
Moscow is the capital, the most populous city, and the most populous federal subject of Russia. The city is a major political, economic, cultural, scientific, religious, financial, educational, and transportation centre of Russia and the continent...
, Zápotocký and Široký were told to adhere to the principles of "collective leadership"--in other words, abandon power to Novotný. After Zápotocký's death in 1957, Novotný succeeded him as president.

In the Czechoslovakia of Novotný, people continued to face strict government regulations in the arts and media, although they had loosened dramatically since Stalin's death in 1953 and the subsequent De-Stalinisation programmes of 1956. His quasi-authoritarian practices led to mounting calls for a new form of socialism over the unsatisfactory pace of change that would include the accountability, proper elections, and responsibility of leaders to society. Novotný's administration, however, still remained centralised for 10 years. While he was forced to adopt some reforms in the 1960s, these efforts were half-hearted at best.

But growing public unpopularity caused Novotný to lose his grip on power. He was forced to resign as party leader in January 1968 and was replaced by a reformer, Alexander Dubček
Alexander Dubcek
Alexander Dubček , also known as Dikita, was a Slovak politician and briefly leader of Czechoslovakia , famous for his attempt to reform the communist regime during the Prague Spring...
. In March 1968, he was ousted as president and in May he resigned from the Central Committee of KSC.