Encyclopedia
The anti-torpedo bulge is a form of passive defence against naval torpedoes
Torpedo
The modern torpedo is a self-propelled missile weapon with an explosive warhead, launched above or below the water surface, propelled underwater towards a target, and designed to detonate either on contact with it or in proximity to it.The term torpedo was originally employed for...
that featured in warship
Warship
A warship is a ship that is built and primarily intended for combat. Warships are usually built in a completely different way from merchant ships. As well as being armed, warships are designed to withstand damage and are usually faster and more maneuvrable than merchant ships...
construction in the period between the First
World War I
World War I , which was predominantly called the World War or the Great War from its occurrence until 1939, and the First World War or World War I thereafter, was a major war centred in Europe that began on 28 July 1914 and lasted until 11 November 1918...
and Second
World War II
World War II, or the Second World War , was a global conflict lasting from 1939 to 1945, involving most of the world's nations—including all of the great powers—eventually forming two opposing military alliances: the Allies and the Axis...
World Wars.

Essentially, the bulge is a lateral compartment at the waterline
Waterline
The term "waterline" generally refers to the line where the hull of a ship meets the water surface. It is also the name of a special marking, also known as the national Load Line or Plimsoll Line, to be positioned amidships, that indicates the draft of the ship and the legal limit to which a ship...
level that is isolated from the ship's internal volume. It is part air-filled, and part free-flooding. In theory, a torpedo strike will rupture and flood the air-filled component of the bulge and the water-filled part will dissipate the shock and absorb explosive fragments, leaving the ship's main hull structurally intact. Transverse bulkheads within the bulge limit flooding throughout the entirety of the structure. 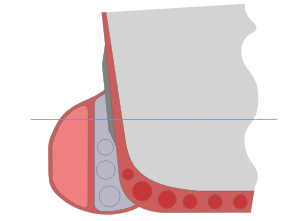 The bulge was developed by the British
United Kingdom
The United Kingdom of Great Britain and Northern IrelandIn the United Kingdom and Dependencies, other languages have been officially recognised as legitimate autochthonous languages under the European Charter for Regional or Minority Languages...
Director of Naval Construction
Director of Naval Construction
The Director of Naval Construction was a senior British civil servant post in the Admiralty, that part of the British Civil Service that oversaw the Royal Navy. The post existed from 1860 to 1966....
, Eustace Tennyson-D'Eyncourt, who had four old Edgar-class
Edgar class cruiser
The Edgar-class was a nine-ship class of protected cruiser built around 1891 for the Royal Navy.-Design:Crescent and Royal Arthur were built to a slightly modified design with a raised forecastle and a pair of 6 inch guns replacing the forward 9.2 inch gun, and are sometimes considered a...
protected cruiser
Protected cruiser
The protected cruiser is a type of naval cruiser of the late 19th century, so known because its armoured deck offered protection for vital machine spaces from shrapnel caused by exploding shells above...
s so fitted in 1914. These ships were used for shore bombardment
Naval gunfire support
Naval gunfire support is the use of naval artillery to provide fire support for amphibious assault and other troops operating within their range. NGFS is one of a number of disciplines encompassed by the term Naval Fires...
duties, and so were exposed to inshore submarine
Submarine
A submarine is a watercraft capable of independent operation below the surface of the water. It differs from a submersible, which has more limited underwater capability...
and torpedo boat
Torpedo boat
A torpedo boat is a relatively small and fast naval vessel designed to carry torpedoes into battle. The first designs rammed enemy ships with explosive spar torpedoes, and later designs launched self-propelled Whitehead torpedoes. They were created to counter battleships and other large, slow and...
attack. Grafton was torpedoed in 1917, and apart from a few minor splinter holes, the damage was confined to the bulge and the ship safely made port. Edgar was hit in 1918, this time damage to the elderly hull was confined to dented plating. The Royal Navy
Royal Navy
The Royal Navy is the naval warfare service branch of the British Armed Forces. Founded in the 16th century, it is the oldest service branch and is known as the Senior Service...
had all new construction fitted with bulges from 1914, beginning with the Revenge-class
Revenge class battleship
The Revenge class battleships were five battleships of the Royal Navy, ordered as World War I loomed on the horizon, and launched in 1914–1916...
battleships. Older ships also had bulges incorporated during refits. The Royal Navy had its large monitors fitted with enormous bulges. This was fortuitous for Terror
HMS Terror (I03)
HMS Terror was an Erebus-class monitor built for the Royal Navy in 1915-16 at the Harland and Wolff shipyard in Govan, Scotland.The Erebus-class monitors were of displacement, long, with a maximum speed of produced by reciprocating engines with two shafts, and a crew of 223. The ship's main...
, which survived three torpedoes striking the hull forwards and her sister Erebus
HMS Erebus (I02)
HMS Erebus was a World War I monitor launched on 19 June 1916 and served in both world wars. She and her sister HMS Terror are known as the Erebus class...
, which survived a direct hit from a remotely-controlled explosive motor boat that ripped off 50 feet (15.25 m) of her bulge.

Later designs of bulges incorporated various combinations of air and water filled compartments and packing of wood and sealed tubes. As bulges increased a ship's beam, they caused a reduction in speed, which is a function of the length-to-beam ratio. Therefore, various combinations of narrow and internal bulges appeared throughout the 1920s and into the 1930s. The bulge had disappeared from construction in the 1930s, being replaced by internal arrangements of compartments with a similar function.

Anti-torpedo bulges were still added as retrofits to older ships, such as HMS Renown
HMS Renown (1916)
HMS Renown was the lead ship of her class of battlecruisers of the Royal Navy built during the First World War. She was originally laid down as an improved version of the s. Her construction was suspended on the outbreak of war on the grounds she would not be ready in a timely manner...
and USS Enterprise
USS Enterprise (CV-6)
USS Enterprise , colloquially referred to as the "Big E," was the sixth aircraft carrier of the United States Navy and the seventh U.S. Navy ship to bear the name. Launched in 1936, she was a ship of the Yorktown class, and one of only three American carriers commissioned prior to World War II to...
.

For greater effect, modern torpedoes are designed to explode beneath the hull of the target so they rarely strike the side of the ship directly.
The source of this article is wikipedia, the free encyclopedia.  The text of this article is licensed under the GFDL.