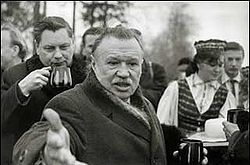 Antanas Sniečkus was First Secretary of the Lithuanian Communist Party from August 1940 to January 22, 1974.

Antanas Sniečkus was born in 1903, in the village of Būbleliai, near Šakiai
Šakiai
Šakiai is a city in the Marijampolė County, Lithuania. It is located west of Kaunas. It is presumed that Šakiai first expanded from Šakaičai village. By 1719 a church in Šakiai was built. By the 19th century Šakiai already had city rights; it also had a school, Catholic and Lutheran churches, a...
. During the First World War, his family fled to Russia where he observed the Russian revolution of 1917. In 1919, his family returned to Lithuania; by 1920 he was already a member of the Bolshevik Party. In the same year, he was arrested for anti-governmental activities. He was released from prison on bail, but fled to Moscow, and became an agent of the Comintern
Comintern
The Communist International, abbreviated as Comintern, also known as the Third International, was an international communist organization initiated in Moscow during March 1919...
. In Moscow, he earned the trust of Zigmas Angarietis, and Vincas Mickevičius-Kapsukas
Vincas Mickevicius-Kapsukas
Vincas Mickevičius-Kapsukas was a Lithuanian political activist, one of the founders and leaders of the Communist Party of Lithuania and the Lithuanian Soviet Socialist Republic ....
, and became a member of the Central Committee of the Communist Party of Lithuania. In 1926, the Comintern sent Sniečkus to Lithuania to replace the recently-executed Karolis Požėla as head of the banned and underground Communist Party of Lithuania.

From 1926 to 1930, he engaged in subversive activities in Lithuania, and was again arrested and imprisoned for them in the Kaunas Prison
Kaunas Prison
Kaunas Prison is a prison in the center of Kaunas, second largest city of Lithuania. As of 2007, it houses approximately 300 prisoners and employs around 230 prison guards...
in 1930. In 1933, Sniečkus was released in exchange for Lithuanian political prisoners held in the USSR. In 1936, he returned to Lithuania. In 1939, he was arrested again, and sentenced to eight years in prison. After the Soviets invaded and occupied Lithuania, Sniečkus was released from prison on June 18, 1940, and became the head of the Department of National Security. Foreign Affairs Commissar Vladimir Dekanozov
Vladimir Dekanozov
Vladimir Georgievich Dekanozov ) was a Soviet senior state security operative and diplomat.-Before Second World War:...
, arrived in Lithuania a few days earlier on June 15, 1940, to organize the incorporation of Lithuania into the Soviet Union. As party secretary, Sniečkus issued Vladimir Dekanozov’s orders in the party’s name. Sniečkus helped create an atmosphere of terror prior to the elections of the newly established, by the Soviet authorities, People's Seimas, on July 14, 1940. Only the Communist Party of Lithuania and its collaborators could nominate candidates. People were threatened in various ways to participate in the elections, but the results were falsified anyway. On July 21, 1940, the People's Parliament, declared that the Lithuanian "people" wanted to join the Soviet Union, and on August 3, 1940, the Supreme Soviet of the USSR incorporated Lithuania into the Soviet Union. The process of annexation was formally over and the Lithuanian Soviet Socialist Republic was created. From August 15, 1940, until his death, Sniečkus was the First Secretary of the Lithuanian Communist Party.

Sniečkus was the initiator of the first mass deportations of Lithuanians between the 14th and 19 June 1941. He even had his own brother, with his family, deported to Siberia, where his brother died.

In 1944, due to advance of the Red Army, his mother fled Lithuania to the West, and disowned her son. Two brothers and three sisters of Antanas Sniečkus also fled to the West. Sniečkus returned from Russia in 1944, with the Communist officials who had retreated during the German invasion of 22 June 1941.

Sniečkus again organized mass deportations of Lithuanians following the war. In 1948, Sniečkus started the collectivisation of agriculture. By terror, killings and deportations, most peasants were collectivised by 1952. Agricultural production fell dramatically to the level of Soviet agriculture in the other Soviet Republics. When Soviet party chief Nikita Khrushchev
Nikita Khrushchev
Nikita Sergeyevich Khrushchev led the Soviet Union during part of the Cold War. He served as First Secretary of the Communist Party of the Soviet Union from 1953 to 1964, and as Chairman of the Council of Ministers, or Premier, from 1958 to 1964...
issued an amnesty program, many political prisoners and deported people were released from prisons and labour camps, but Sniečkus did not allow them to return to Lithuania.

During the later decades of Sniečkus's rule national orientation was noticeable in his activities. First confrontation with Moscow happened in 1949-1950, when he had to defend his old communist friends from persecution, with whom he was together working in underground. Lithuania was the only republic of USSR where not only mass persecution of old communists did not happen and not even one communist of pre-Soviet times was incorrectly accused and arrested. At around this time his policies started to gain national character. This policy had a form of sabotaging some orders of Moscow, demanding some privileges for Lithuania, and others.

His wife Mira Bordonaitė was also a convicted communist and spent many years in prison . Sniečkus had two children, Vladas and Marytė .

Sniečkus, a village for employees of the Ignalina Nuclear Power Plant
Ignalina Nuclear Power Plant
The Ignalina Nuclear Power Plant is a closed two-unit RBMK-1500 nuclear power station in Visaginas, Lithuania. It was named after the nearby city of Ignalina...
on the shores of Lake Visaginas, was founded in 1975. In 1992 the town was renamed Visaginas
Visaginas
Visaginas is a city with municipal rights in eastern Lithuania, situated near the country's biggest lake, Drūkšiai. Its administrative boundaries are in the process of being defined. The Vilnius–Daugavpils railway runs alongside the town, providing convenient communication with Vilnius and...
and in 1995 received city rights.

Some attempts have been made in Lithuania to rehabilitate Sniečkus, who was more or less successfully mythologized throughout several decades.
The source of this article is wikipedia, the free encyclopedia.  The text of this article is licensed under the GFDL.