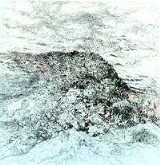 Encyclopedia
Anna Ticho (born 1894, died 1980) was a Jewish artist who became famous for her drawings of the Jerusalem hills. 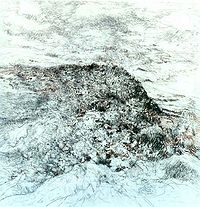 Anna Ticho was born in Moravia
Moravia
Moravia is a historical region in Central Europe in the east of the Czech Republic, and one of the former Czech lands, together with Bohemia and Silesia. It takes its name from the Morava River which rises in the northwest of the region...
, then part of the Austro-Hungarian Empire (today Czech Republic) in 1894. At the age of 15, she began to study drawing in Vienna.

In 1912 she immigrated to Palestine
Palestine
Palestine is a conventional name, among others, used to describe the geographic region between the Mediterranean Sea and the Jordan River, and various adjoining lands....
with her cousin, the respected ophthalmologist Avraham Albert Ticho (1883–1960), whom she later married. They settled in Jerusalem, where Dr. Ticho opened an eye clinic and Anna worked as his assistant. The clinic closed in 1960 after the death of Dr. Ticho.

In 1924, the couple purchased a large house surrounded by gardens, built in 1880 for the Nashashibi
Nashashibi
Nashashibi is the name of a prominent Palestinian family based in Jerusalem. Many of its members held senior positions in the government of Jerusalem. Raghib al-Nashashibi was Mayor of Jerusalem .- History :...
s, a prominent local family, where they lived and worked. The house had previously been lived in by antiquities dealer and forger Herman Shapira. Ticho hosted local and British government officials in her home, as well as many artists, writers, academics and intellectuals. Toward the end of her life, she willed the house, her art collection, including many of her own works, and her husband's extensive Judaica collection to the city of Jerusalem.

She died in 1980. Ticho House
Ticho House
Ticho House is a historical home in Jerusalem, Israel, now a museum. It was one of the first homes built outside the Old City walls at the end of the nineteenth century....
operates today as a branch of the Israel Museum
Israel Museum
The Israel Museum, Jerusalem was founded in 1965 as Israel's national museum. It is situated on a hill in the Givat Ram neighborhood of Jerusalem, near the Bible Lands Museum, the Knesset, the Israeli Supreme Court, and the Hebrew University of Jerusalem....
, and houses a popular restaurant and cafe.

While the dramatically different light of the Middle East and the starkness of the landscape inhibited her artistic pursuits at first, in the 1930s Ticho went back to drawing and painting. It was then that she produced many of the distinctive drawings of the hills of Jerusalem and portraits of local people for which she became well known. Today, Ticho's drawings and watercolors can be found in major museums around the world.

In 2005, she was voted the 190th-greatest Israeli of all time, in a poll by the Israeli news website Ynet
Ynet
Ynet is the most popular Israeli news and general content website. It is owned by the same conglomerate that operates Yediot Ahronot, the country's secondleading daily newspaper...
to determine whom the general public considered the 200 Greatest Israelis.