Animal style art is characterized by its emphasis on animal and bird motifs, and the term describes an approach to decoration which existed from China
China
Chinese civilization may refer to:* China for more general discussion of the country.* Chinese culture* Greater China, the transnational community of ethnic Chinese.* History of China* Sinosphere, the area historically affected by Chinese culture...
to Northern Europe
Northern Europe
Northern Europe is the northern part or region of Europe. Northern Europe typically refers to the seven countries in the northern part of the European subcontinent which includes Denmark, Estonia, Latvia, Lithuania, Norway, Finland and Sweden...
in the early Iron Age
Iron Age
The Iron Age is the archaeological period generally occurring after the Bronze Age, marked by the prevalent use of iron. The early period of the age is characterized by the widespread use of iron or steel. The adoption of such material coincided with other changes in society, including differing...
, and the barbarian art of the Migration Period
Migration Period
The Migration Period, also called the Barbarian Invasions , was a period of intensified human migration in Europe that occurred from c. 400 to 800 CE. This period marked the transition from Late Antiquity to the Early Middle Ages...
. It is a zoomorphic style of decoration, and the Animal Style was used to decorate small objects by warrior-herdsmen, whose economy was based entirely on animals and plunder. 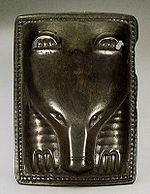 A distinct style of decoration found in objects made of various copper alloys near the Ural mountains and the Volga and Kama rivers in today's Russia beginning from about 7th - 5th centuries BCE. http://www.russia-ic.com/culture_art/visual_arts/200/

The study of Northern European, or "Germanic", zoomorphic decoration was pioneered by Bernhard Salin in a work published in 1904. He classified animal art of the period roughly from 400 to 900 into three phases: Styles I, II and III. The origins of these different phases are still the subject of considerable debate; the development of trends in late-Roman popular art in the provinces is one element, and the older traditions of nomadic Asiatic steppe peoples another. The first two styles are found very widely across Europe in the art of the "barbarian" peoples of the Migration Period
Migration Period
The Migration Period, also called the Barbarian Invasions , was a period of intensified human migration in Europe that occurred from c. 400 to 800 CE. This period marked the transition from Late Antiquity to the Early Middle Ages...
.

Style I. First appears in northwest Europe, it became a noticeable new style with the introduction of the chip carving
Chip carving
Chip carving or chip-carving, kerbschnitt in German, is a style of carving in which knives or chisels are used to remove small chips of the material from a flat surface in a single piece. The style became important in Migration Period metalwork, mainly Animal style jewellery, where the faceted...
technique applied to bronze and silver in the 5th century. It is characterized by animals whose bodies are divided into sections, and typically appear at the fringes of designs whose main emphasis is on abstract patterns.

Style II. After about 560-570 Style I was in decline and Salin's Style II began to replace it. Style II's animals are whole beasts, but their bodies are elongated into "ribbons" which intertwined into symmetrical shapes with no pretence of naturalism, and rarely any legs, so that they tend to be described as serpents, although the heads often have characteristics of other types of animal. The animal becomes subsumed into ornamental patterns, typically using interlace. Thus two bears are facing each other in perfect symmetry ("confronted"), forming the shape of a heart. Examples of Style II can be found on the gold purse lid (picture) from Sutton Hoo
Sutton Hoo
Sutton Hoo, near to Woodbridge, in the English county of Suffolk, is the site of two 6th and early 7th century cemeteries. One contained an undisturbed ship burial including a wealth of Anglo-Saxon artefacts of outstanding art-historical and archaeological significance, now held in the British...
(ca. 625).

After about 700 localised styles develop, and it is no longer very useful to talk of a general Germanic style. Salin Style III is found mainly in Scandinavia, and may also be called Viking art. Interlace, where it occurs, becomes less regular and more complex, and if not three-dimensional animals are usually seen in profile but twisted, exaggerated, surreal, with fragmented body parts filling every available space, creating an intense detailed energetic feel. Animals' bodies become hard for the unpractised viewer to read, and there is a very common motif of the "gripping beast" where an animal's mouth grips onto another element of the composition to connect two parts. Animal style was one component, along with Celtic art
Celtic art
Celtic art is the art associated with the peoples known as Celts; those who spoke the Celtic languages in Europe from pre-history through to the modern period, as well as the art of ancient peoples whose language is uncertain, but have cultural and stylistic similarities with speakers of Celtic...
and late classical elements, in the formation of style of Insular art
Insular art
Insular art, also known as Hiberno-Saxon art, is the style of art produced in the post-Roman history of Ireland and Great Britain. The term derives from insula, the Latin term for "island"; in this period Britain and Ireland shared a largely common style different from that of the rest of Europe...
and Anglo-Saxon art
Anglo-Saxon art
Anglo-Saxon art covers art produced within the Anglo-Saxon period of English history, beginning with the Migration period style that the Anglo-Saxons brought with them from the continent in the 5th century, and ending in 1066 with the Norman Conquest of a large Anglo-Saxon nation-state whose...
in the British Isles, and through these routes and others on the Continent, left a considerable legacy in later Medieval art.