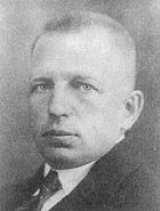 Encyclopedia
Andrei Sergeyevich Bubnov (Russian: Андрей Сергеевич Бубнов) (March 23, 1883 – January 12, 1940) was a Bolshevik
Bolshevik
The Bolsheviks, originally also Bolshevists , derived from bol'shinstvo, "majority") were a faction of the Marxist Russian Social Democratic Labour Party which split apart from the Menshevik faction at the Second Party Congress in 1903....
revolutionary leader in Russia
Russia
Russia or , officially known as both Russia and the Russian Federation , is a country in northern Eurasia. It is a federal semi-presidential republic, comprising 83 federal subjects...
, and member of the Left Opposition
Left Opposition
The Left Opposition was a faction within the Bolshevik Party from 1923 to 1927, headed de facto by Leon Trotsky. The Left Opposition formed as part of the power struggle within the party leadership that began with the Soviet founder Vladimir Lenin's illness and intensified with his death in January...
.

In 1909 Bubnov was made an agent of the Central Committee
Central Committee
Central Committee was the common designation of a standing administrative body of communist parties, analogous to a board of directors, whether ruling or non-ruling in the twentieth century and of the surviving, mostly Trotskyist, states in the early twenty first. In such party organizations the...
in Moscow but the following year he was back in prison. On his release he was sent to organize workers in Nizhny Novgorod
Nizhny Novgorod
Nizhny Novgorod , colloquially shortened to Nizhny, is, with the population of 1,250,615, the fifth largest city in Russia, ranking after Moscow, St. Petersburg, Novosibirsk, and Yekaterinburg...
. He also contributed to Pravda
Pravda
Pravda was a leading newspaper of the Soviet Union and an official organ of the Central Committee of the Communist Party between 1912 and 1991....
.

On the outbreak of the First World War Bubnov became involved in the anti-war movement. He was arrested in October, 1916, and exiled to Siberia
Siberia
Siberia is an extensive region constituting almost all of Northern Asia. Comprising the central and eastern portion of the Russian Federation, it was part of the Soviet Union from its beginning, as its predecessor states, the Tsardom of Russia and the Russian Empire, conquered it during the 16th...
.

Andrei Bubnov signed the Declaration of 46
The Declaration of 46
The Declaration of 46 was a secret letter sent by a group of 46 leading Soviet communists to the Politburo of the Central Committee of the Soviet Communist Party on 15 October 1923...
in October 1923, but in January, 1924, he switched to supporting Joseph Stalin
Joseph Stalin
Joseph Vissarionovich Stalin was the Premier of the Soviet Union from 6 May 1941 to 5 March 1953. He was among the Bolshevik revolutionaries who brought about the October Revolution and had held the position of first General Secretary of the Communist Party of the Soviet Union's Central Committee...
and was rewarded by being appointed as Head of Political Control of the Red Army
Red Army
The Workers' and Peasants' Red Army started out as the Soviet Union's revolutionary communist combat groups during the Russian Civil War of 1918-1922. It grew into the national army of the Soviet Union. By the 1930s the Red Army was among the largest armies in history.The "Red Army" name refers to...
. Elected to Central Committee, he replaced Lunacharsky as People's Commissar for Education.

As Commissar for Education he ended the period of progressive, experimental educational practices and switched the emphasis to training in practical industrial skills.

He was expelled from the Party Central Committee in November 1937, arrested and perished in the Great Purge
Great Purge
The Great Purge was a series of campaigns of political repression and persecution in the Soviet Union orchestrated by Joseph Stalin from 1936 to 1938...
. Bubnov was posthumously rehabilitated in 1958. His close relatives were still searching for him in various psycho-hospitals in 1970s.
The source of this article is wikipedia, the free encyclopedia.  The text of this article is licensed under the GFDL.