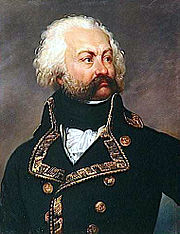 Adam Philippe, Comte de Custine (February 4, 1740 – August 28, 1793) was a French
France
The French Republic , The French Republic , The French Republic , (commonly known as France , is a unitary semi-presidential republic in Western Europe with several overseas territories and islands located on other continents and in the Indian, Pacific, and Atlantic oceans. Metropolitan France...
general. Born in Metz
Metz
Metz is a city in the northeast of France located at the confluence of the Moselle and the Seille rivers.Metz is the capital of the Lorraine region and prefecture of the Moselle department. Located near the tripoint along the junction of France, Germany, and Luxembourg, Metz forms a central place...
, he began his military career as a captain in the Seven Years' War
Seven Years' War
The Seven Years' War was a global military war between 1756 and 1763, involving most of the great powers of the time and affecting Europe, North America, Central America, the West African coast, India, and the Philippines...
, where he learned to admire the modern military organisation of Prussia
Prussia
Prussia was a German kingdom and historic state originating out of the Duchy of Prussia and the Margraviate of Brandenburg. For centuries, the House of Hohenzollern ruled Prussia, successfully expanding its size by way of an unusually well-organized and effective army. Prussia shaped the history...
.

He next served with distinction against the British as a colonel in expeditionary force of the comte de Rochambeau
Jean-Baptiste Donatien de Vimeur, comte de Rochambeau
Marshal of France Jean-Baptiste Donatien de Vimeur, comte de Rochambeau was a French nobleman and general who participated in the American Revolutionary War as the commander-in-chief of the French Expeditionary Force which came to help the American Continental Army...
in the War of American Independence. On his return to France he was named maréchal de camp (brigadier general
Brigadier General
Brigadier general is a senior rank in the armed forces. It is the lowest ranking general officer in some countries, usually sitting between the ranks of colonel and major general. When appointed to a field command, a brigadier general is typically in command of a brigade consisting of around 4,000...
) and appointed governor of Toulon
Toulon
Toulon is a town in southern France and a large military harbor on the Mediterranean coast, with a major French naval base. Located in the Provence-Alpes-Côte-d'Azur region, Toulon is the capital of the Var department in the former province of Provence....
. In 1789 he was elected to the states-general
French States-General
In France under the Old Regime, the States-General or Estates-General , was a legislative assembly of the different classes of French subjects. It had a separate assembly for each of the three estates, which were called and dismissed by the king...
by the bailliage of Metz
Metz
Metz is a city in the northeast of France located at the confluence of the Moselle and the Seille rivers.Metz is the capital of the Lorraine region and prefecture of the Moselle department. Located near the tripoint along the junction of France, Germany, and Luxembourg, Metz forms a central place...
. In October 1791 he again joined the army, with the rank of lieutenant-general and became popular with the soldiers, amongst whom he was known as général moustache. General-in-chief of the army of the Vosges
Vosges
Vosges is a French department, named after the local mountain range. It contains the hometown of Joan of Arc, Domrémy.-History:The Vosges department is one of the original 83 departments of France, created on February 9, 1790 during the French Revolution. It was made of territories that had been...
, he took Speyer
Speyer
Speyer is a city of Rhineland-Palatinate, Germany with approximately 50,000 inhabitants. Located beside the river Rhine, Speyer is 25 km south of Ludwigshafen and Mannheim. Founded by the Romans, it is one of Germany's oldest cities...
, Worms
Worms, Germany
Worms is a city in Rhineland-Palatinate, Germany, on the Rhine River. At the end of 2004, it had 85,829 inhabitants.Established by the Celts, who called it Borbetomagus, Worms today remains embattled with the cities Trier and Cologne over the title of "Oldest City in Germany." Worms is the only...
, Mainz
Mainz
Mainz under the Holy Roman Empire, and previously was a Roman fort city which commanded the west bank of the Rhine and formed part of the northernmost frontier of the Roman Empire...
and Frankfurt
Frankfurt
Frankfurt am Main , commonly known simply as Frankfurt, is the largest city in the German state of Hesse and the fifth-largest city in Germany, with a 2010 population of 688,249. The urban area had an estimated population of 2,300,000 in 2010...
in September and October 1792.

He carried on the revolutionary propaganda by proclamations, and levied heavy taxes on the nobility
Nobility
Nobility is a social class which possesses more acknowledged privileges or eminence than members of most other classes in a society, membership therein typically being hereditary. The privileges associated with nobility may constitute substantial advantages over or relative to non-nobles, or may be...
and clergy
Clergy
Clergy is the generic term used to describe the formal religious leadership within a given religion. A clergyman, churchman or cleric is a member of the clergy, especially one who is a priest, preacher, pastor, or other religious professional....
. During the winter a Prussia
Prussia
Prussia was a German kingdom and historic state originating out of the Duchy of Prussia and the Margraviate of Brandenburg. For centuries, the House of Hohenzollern ruled Prussia, successfully expanding its size by way of an unusually well-organized and effective army. Prussia shaped the history...
n army forced him to evacuate Frankfurt, re-cross the Rhine and fall back upon Landau
Landau
Landau or Landau in der Pfalz is an autonomous city surrounded by the Südliche Weinstraße district of southern Rhineland-Palatinate, Germany. It is a university town , a long-standing cultural centre, and a market and shopping town, surrounded by vineyards and wine-growing villages of the...
. He was accused of treason, defended by Robespierre, and sent to command the Army of the North. But he dared not take the offensive, and did nothing to save Condé-sur-l'Escaut
Condé-sur-l'Escaut
-Administration:Condé-sur-l'Escaut is the eastern member of the agglomerated Valenciennes metropolitan area, which together administers 35 communes.-References:...
, which the Austria
Austria
Austria , officially the Republic of Austria , is a landlocked country of roughly 8.4 million people in Central Europe. It is bordered by the Czech Republic and Germany to the north, Slovakia and Hungary to the east, Slovenia and Italy to the south, and Switzerland and Liechtenstein to the...
ns were besieging. Sent to Paris
Paris
Paris is the capital and largest city in France, situated on the river Seine, in northern France, at the heart of the Île-de-France region...
to justify himself, he was found guilty by the Revolutionary Tribunal
Revolutionary Tribunal
The Revolutionary Tribunal was a court which was instituted in Paris by the Convention during the French Revolution for the trial of political offenders, and eventually became one of the most powerful engines of the Reign of Terror....
of having intrigued with the enemies of the Republic, and guillotine
Guillotine
The guillotine is a device used for carrying out :executions by decapitation. It consists of a tall upright frame from which an angled blade is suspended. This blade is raised with a rope and then allowed to drop, severing the head from the body...
d on 28 August 1793.

Custine's invasion of the German Palatinate forms the background for Goethe's "Hermann and Dorothea
Hermann and Dorothea
Hermann and Dorothea is an epic poem, an idyll, written by German writer Johann Wolfgang von Goethe between 1796 and 1797, and was to some extent suggested by Johann Heinrich Voss's Luise, an idyll in hexameters, first published in 1782-84...
", whose plot takes place in a small town near Mainz
Mainz
Mainz under the Holy Roman Empire, and previously was a Roman fort city which commanded the west bank of the Rhine and formed part of the northernmost frontier of the Roman Empire...
, flooded by refugees who fled their villages on the western side of the Rhine in order to seek refuge from the French troops on the eastern side.
The source of this article is wikipedia, the free encyclopedia.  The text of this article is licensed under the GFDL.