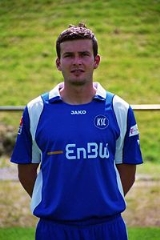 Encyclopedia
Andreas Görlitz is a German
Germany
Germany , officially the Federal Republic of Germany , is a federal parliamentary republic in Europe. The country consists of 16 states while the capital and largest city is Berlin. Germany covers an area of 357,021 km2 and has a largely temperate seasonal climate...
footballer who plays for FC Ingolstadt 04
FC Ingolstadt 04
FC Ingolstadt 04 is a German football club based in Ingolstadt, Bavaria. The club was founded in 2004 out of the merger of the football sides of two other clubs: ESV Ingolstadt and MTV Ingolstadt.-ESV Ingolstadt:...
in the German second division
2. Fußball-Bundesliga
- Changes in division set-up :* Number of clubs: currently 18. From 1974 to 1981 there were two conferences, each of 20 teams. In 1981–91 it had 20...
, as a right defender.

Born in Weilheim in Oberbayern
Weilheim in Oberbayern
Weilheim in Oberbayern is a town in Germany, the capital of the district Weilheim-Schongau in the south of Bavaria.Weilheim has an old city-wall, historic houses and a museum.-Sport:...
, Bavaria
Bavaria
Bavaria, formally the Free State of Bavaria is a state of Germany, located in the southeast of Germany. With an area of , it is the largest state by area, forming almost 20% of the total land area of Germany...
, West Germany
West Germany
West Germany is the common English, but not official, name for the Federal Republic of Germany or FRG in the period between its creation in May 1949 to German reunification on 3 October 1990....
, Görlitz began his professional career (as a midfielder
Midfielder
A midfielder is an association football position. Some midfielders play a more defensive role, while others blur the boundaries between midfielders and forwards. The number of midfielders a team uses during a match may vary, depending on the team's formation and each individual player's role...
) with TSV 1860 München
TSV 1860 München
Turn- und Sportverein München von 1860, commonly known as TSV 1860 München or 1860 Munich, is a German sports club based in Munich, Bavaria. The club's football team plays in the Second Bundesliga, after relegation from the Bundesliga following the 2003–04 season...
, by then in the Bundesliga
Fußball-Bundesliga
The Fußball-Bundesliga is a professional association football league in Germany. At the top of Germany's football league system, it is the country's primary football competition. It is contested by 18 teams and operates on a system of promotion and relegation with the 2. Bundesliga...
; his first match came on 10 February 2002, in a 1–2 loss at 1. FC Nuremberg, but he could only amass a further four league games in his first two seasons combined.

Görlitz signed with TSV neighbours FC Bayern Munich
FC Bayern Munich
FC Bayern Munich , is a German sports club based in Munich, Bavaria. It is best known for its professional football team, which is the most successful football club in Germany, having won 22 national titles and 15 cups....
in the 2004 summer. He even started some matches in the new season but, following an injury in a UEFA Champions League contest against Juventus FC
Juventus F.C.
Juventus Football Club S.p.A. , commonly referred to as Juventus and colloquially as Juve , are a professional Italian association football club based in Turin, Piedmont...
, on 3 November, spent almost two years in the sidelines.

In the summer of 2007, it was announced that Görlitz would join newly promoted Karlsruher SC
Karlsruher SC
Karlsruher SC is a German association football club, based in Karlsruhe, Baden-Württemberg. KSC rose out of the consolidation of a number of predecessor clubs. They currently play in the 2...
, on loan for the 2007–08 season. The player only missed three league matches and his club finished 11th, well clear from relegation.

On 9 May 2008, the loan deal was extended for another season. Following his second year, in which he featured significantly less, also suffering another relegation, Görlitz returned to Bayern, to play through the final year in his contract. For the third consecutive season at the club, he was often demoted to the reserve squad
FC Bayern Munich II
Bayern Munich II are the second team of German association football club Bayern Munich. In 2010–11 they played in the 3rd Liga, having qualified for its inaugural season in 2008, and have consistently played at the third level of German football — they played in the Regionalliga Süd from...
.