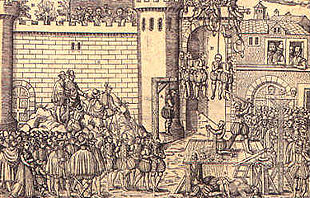 The Amboise conspiracy, also called Tumult of Amboise, was a failed attempt by Huguenot
Huguenot
The Huguenots were members of the Protestant Reformed Church of France during the 16th and 17th centuries. Since the 17th century, people who formerly would have been called Huguenots have instead simply been called French Protestants, a title suggested by their German co-religionists, the...
s in 1560 to gain power of France
France
The French Republic , The French Republic , The French Republic , (commonly known as France , is a unitary semi-presidential republic in Western Europe with several overseas territories and islands located on other continents and in the Indian, Pacific, and Atlantic oceans. Metropolitan France...
by abducting the young king, Francis II
Francis II of France
Francis II was aged 15 when he succeeded to the throne of France after the accidental death of his father, King Henry II, in 1559. He reigned for 18 months before he died in December 1560...
and arresting Francis, Duke of Guise
Francis, Duke of Guise
Francis de Lorraine II, Prince of Joinville, Duke of Guise, Duke of Aumale , called Balafré , was a French soldier and politician.-Early life:...
and his brother, the Cardinal of Lorraine. It was one of the events directly leading up to the Wars of Religion
French Wars of Religion
The French Wars of Religion is the name given to a period of civil infighting and military operations, primarily fought between French Catholics and Protestants . The conflict involved the factional disputes between the aristocratic houses of France, such as the House of Bourbon and House of Guise...
that divided France from 1562 to 1598.

At the death of Henry II
Henry II of France
Henry II was King of France from 31 March 1547 until his death in 1559.-Early years:Henry was born in the royal Château de Saint-Germain-en-Laye, near Paris, the son of Francis I and Claude, Duchess of Brittany .His father was captured at the Battle of Pavia in 1525 by his sworn enemy,...
in 1559, the Protestants of France looked forward to a relaxation of stringent policies against their religion, but the young king, Francis II, retained his father's policy. Among the king's advisors were his wife's uncles, Francis, Duke of Guise
Francis, Duke of Guise
Francis de Lorraine II, Prince of Joinville, Duke of Guise, Duke of Aumale , called Balafré , was a French soldier and politician.-Early life:...
and Charles of Guise, Cardinal of Lorraine, who through their niece exercised great influence with the King.

A group of provincial aristocrats decided to take matters into their own hands, by kidnapping the King and arresting the brothers Guise. Chief among the conspirators was Godefroy de Barry, seigneur de La Renaudie, of Périgord.

La Renaudie gathered round him like-minded Huguenot gentlemen representing various regions of France: Charles de Castelnau de Chalosse, Bouchard d'Aubeterre, Edme de Ferrière-Maligny, Captains Mazères, Cañizares, Sainte-Marie and Lignières, Jean d'Aubigné (father of Agrippa d'Aubigné
Agrippa d'Aubigné
Théodore-Agrippa d'Aubigné was a French poet, soldier, propagandist and chronicler. His epic poem Les Tragiques is widely regarded as his masterpiece.-Life:...
) and Ardoin de Porcelet. Paulon de Mauvans, whose brother had been executed, rallied the Huguenots of Provence
Provence
Provence ; Provençal: Provença in classical norm or Prouvènço in Mistralian norm) is a region of south eastern France on the Mediterranean adjacent to Italy. It is part of the administrative région of Provence-Alpes-Côte d'Azur...
at Mérindol
Mérindol
Mérindol is a commune in the Vaucluse department in the Provence-Alpes-Côte d'Azur region in southeastern France.-References:*...
, 12 February 1560, promised 2,000 men and sent 100 to Nantes. Gaspard de Coligny
Gaspard de Coligny
Gaspard de Coligny , Seigneur de Châtillon, was a French nobleman and admiral, best remembered as a disciplined Huguenot leader in the French Wars of Religion.-Ancestry:...
, later also a leading Huguenot, discouraged the nobles of Normandy from involving themselves in the plot. Leading Protestant bourgeois of Orléans, Tours and Lyon were apprised of developments.

Under the circumstances, increasingly specific rumors of the plot reached the Cardinal of Lorraine well ahead of time. On 12 February a detailed report was received through Pierre des Avenelles, a lawyer of Paris. On the 22nd, the Guises decided to transfer King and court from Blois
Blois
Blois is the capital of Loir-et-Cher department in central France, situated on the banks of the lower river Loire between Orléans and Tours.-History:...
to the château of Amboise, a more defensible site, and strengthened the castle's defenses.

The conspirators delayed their plan of action from 1 March to the 16th, but the first of the plotters' contingents arrived in the village early, and were quietly arrested from 10 March.

On 17 March 1560, the conspirators, led by La Renaudie, attempted to storm the Château. Though the court was thrown into panic, the plotters' forces were easily defeated. La Renaudie, caught on 19 March, was drawn and quartered and his flesh displayed at the gates of the town. In the presence of King and Queen, La Renaudie's followers - between 1,200 and 1,500 - were also killed and their corpses hung on iron hooks on the façade of the Château and from nearby trees; others were drowned in the Loire
Loire
Loire is an administrative department in the east-central part of France occupying the River Loire's upper reaches.-History:Loire was created in 1793 when after just 3½ years the young Rhône-et-Loire department was split into two. This was a response to counter-Revolutionary activities in Lyon...
or exposed to the fury of the townspeople of Amboise.

The early colonist of Brazil
Brazil
Brazil , officially the Federative Republic of Brazil , is the largest country in South America. It is the world's fifth largest country, both by geographical area and by population with over 192 million people...
, Nicolas Durand de Villegaignon
Nicolas Durand de Villegaignon
Nicolas Durand, sieur de Villegaignon, also Villegagnon was a Commander of the Knights of Malta, and later a French naval officer who attempted to help the Huguenots in France escape persecution.A notable public figure in his time, Villegaignon was a mixture of soldier,...
became actively involved against the Protestants, and participated in the repression of the Amboise conspiracy.

Louis of Bourbon, Prince of Condé
Louis I de Bourbon, prince de Condé
Louis de Bourbon was a prominent Huguenot leader and general, the founder of the House of Condé, a cadet branch of the House of Bourbon.-Life:...
, a prince of the blood
Prince du Sang
A prince of the blood was a person who was legitimately descended in the male line from the monarch of a country. In France, the rank of prince du sang was the highest held at court after the immediate family of the king during the ancien régime and the Bourbon Restoration...
was arrested on the suspicion of having been the architect of the plot but was released due to a lack of conclusive evidence. During the events he had preserved a distance from the plot but had stood at the ready at Orléans
Orléans
-Prehistory and Roman:Cenabum was a Gallic stronghold, one of the principal towns of the Carnutes tribe where the Druids held their annual assembly. It was conquered and destroyed by Julius Caesar in 52 BC, then rebuilt under the Roman Empire...
, le capitaine muet, the "silent captain" of the plotters' correspondence. He was one of the principal leaders of the Wars of Religion.