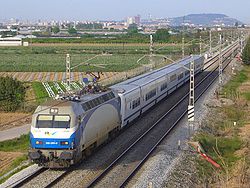 Altaria is the brand name of a group of fast long-distance passenger railway services operated by Spanish
Spain
Spain , officially the Kingdom of Spain languages]] under the European Charter for Regional or Minority Languages. In each of these, Spain's official name is as follows:;;;;;;), is a country and member state of the European Union located in southwestern Europe on the Iberian Peninsula...
national railway company Renfe Operadora
RENFE
Renfe Operadora is the state-owned company which operates freight and passenger trains on the 1668-mm "Iberian gauge" and 1435-mm "European gauge" networks of the Spanish national railway infrastructure company ADIF .- History :The name RENFE is derived from that of the former Spanish National...
and connecting Madrid
Madrid
Madrid is the capital and largest city of Spain. The population of the city is roughly 3.3 million and the entire population of the Madrid metropolitan area is calculated to be 6.271 million. It is the third largest city in the European Union, after London and Berlin, and its metropolitan...
to Algeciras
Algeciras
Algeciras is a port city in the south of Spain, and is the largest city on the Bay of Gibraltar . Port of Algeciras is one of the largest ports in Europe and in the world in three categories: container,...
, Alicante
Alicante
Alicante or Alacant is a city in Spain, the capital of the province of Alicante and of the comarca of Alacantí, in the south of the Valencian Community. It is also a historic Mediterranean port. The population of the city of Alicante proper was 334,418, estimated , ranking as the second-largest...
, Barcelona
Barcelona
Barcelona is the second largest city in Spain after Madrid, and the capital of Catalonia, with a population of 1,621,537 within its administrative limits on a land area of...
, Cádiz
Cádiz
Cadiz is a city and port in southwestern Spain. It is the capital of the homonymous province, one of eight which make up the autonomous community of Andalusia....
, Cartagena
Cartagena, Spain
Cartagena is a Spanish city and a major naval station located in the Region of Murcia, by the Mediterranean coast, south-eastern Spain. As of January 2011, it has a population of 218,210 inhabitants being the Region’s second largest municipality and the country’s 6th non-Province capital...
, Granada
Granada
Granada is a city and the capital of the province of Granada, in the autonomous community of Andalusia, Spain. Granada is located at the foot of the Sierra Nevada mountains, at the confluence of three rivers, the Beiro, the Darro and the Genil. It sits at an elevation of 738 metres above sea...
, Irún
Irun
Irun is a town of the Bidasoa-Txingudi region in the province of Gipuzkoa in the Basque Autonomous Community, Spain...
, Logroño
Logroño
Logroño is a city in northern Spain, on the Ebro River. It is the capital of the autonomous community of La Rioja, formerly known as La Rioja Province.The population of Logroño in 2008 was 153,736 and a metropolitan population of nearly 197,000 inhabitants...
, Murcia
Murcia
-History:It is widely believed that Murcia's name is derived from the Latin words of Myrtea or Murtea, meaning land of Myrtle , although it may also be a derivation of the word Murtia, which would mean Murtius Village...
, Pamplona
Pamplona
Pamplona is the historial capital city of Navarre, in Spain, and of the former kingdom of Navarre.The city is famous worldwide for the San Fermín festival, from July 6 to 14, in which the running of the bulls is one of the main attractions...
, and San Sebastián
San Sebastián
Donostia-San Sebastián is a city and municipality located in the north of Spain, in the coast of the Bay of Biscay and 20 km away from the French border. The city is the capital of Gipuzkoa, in the autonomous community of the Basque Country. The municipality’s population is 186,122 , and its...
.

Altaria trains are composed of locomotive
Locomotive
A locomotive is a railway vehicle that provides the motive power for a train. The word originates from the Latin loco – "from a place", ablative of locus, "place" + Medieval Latin motivus, "causing motion", and is a shortened form of the term locomotive engine, first used in the early 19th...
-hauled Talgo
Talgo
Talgo is a Spanish manufacturer of railway vehicles. It is best known for a design of articulated railway passenger cars in which the wheels are mounted in pairs, but not joined by an axle, and being between rather than underneath the individual coaches...
coaching stock equipped with gauge-changing technology
Variable gauge axles
A variable gauge system allows railway vehicles in a train to travel across a break of gauge caused by two railway networks with differing track gauges....
which enables the carriages to run on both conventional Iberian broad-gauge (1668 mm) track and the narrower international standard-gauge (1435 mm) track which is used for the newer high-speed
High-speed rail
High-speed rail is a type of passenger rail transport that operates significantly faster than the normal speed of rail traffic. Specific definitions by the European Union include for upgraded track and or faster for new track, whilst in the United States, the U.S...
network in Spain. Altaria trains are currently able to achieve speeds of up to 200 km/h on the high-speed lines.