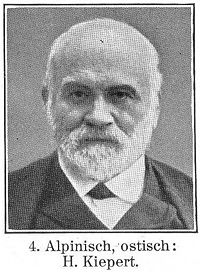 The Alpine race is an historical racial classification or sub-race of humans, considered a branch of the Caucasian race
Caucasian race
The term Caucasian race has been used to denote the general physical type of some or all of the populations of Europe, North Africa, the Horn of Africa, Western Asia , Central Asia and South Asia...
. The term is not commonly used today, but was popular in the early 20th century.

In the nineteenth and early twentieth centuries, many Western anthropologists classified humans into a variety of races and sub-races. Of these, the name Alpines was given to a physical type of the Caucasian race
Caucasian race
The term Caucasian race has been used to denote the general physical type of some or all of the populations of Europe, North Africa, the Horn of Africa, Western Asia , Central Asia and South Asia...
predominant in central
Central Europe
Central Europe or alternatively Middle Europe is a region of the European continent lying between the variously defined areas of Eastern and Western Europe...
/Eastern Europe
Eastern Europe
Eastern Europe is the eastern part of Europe. The term has widely disparate geopolitical, geographical, cultural and socioeconomic readings, which makes it highly context-dependent and even volatile, and there are "almost as many definitions of Eastern Europe as there are scholars of the region"...
and parts of Western/Central Asia
Central Asia
Central Asia is a core region of the Asian continent from the Caspian Sea in the west, China in the east, Afghanistan in the south, and Russia in the north...
, somewhat shorter, narrower shouldered, and darker skinned than those they classified as Nordics and are light-chestnut-haired
Chestnut hair
Chestnut hair is a hair color which is a reddish shade of brown hair. In contrast to auburn hair, the reddish shade of chestnut is darker. The chemical pigments that cause the coloration of chestnut hair are frequently brown eumelanin with stronger levels of pheomelanin....
. This model was first clearly defined in William Z. Ripley
William Z. Ripley
William Zebina Ripley was an American economist, lecturer at Columbia University, professor of economics at MIT, professor of political economics at Harvard University, and racial theorist...
's book The Races of Europe
The Races of Europe (Ripley)
William Z. Ripley published The Races of Europe: A Sociological Study in 1899, which grew out of a series of lectures he gave at the Lowell Institute at Columbia in 1896. Ripley believed that race was critical to understanding human history, though his work afforded environmental and non-biological...
(1899), which proposed three European categories: Teutonic (later termed Nordic), Mediterranean
Mediterranean race
The Mediterranean race was one of the three sub-categories into which the Caucasian race and the people of Europe were divided by anthropologists in the late nineteenth and early twentieth centuries, following the publication of William Z. Ripley's book The Races of Europe...
and Alpine. This model was later popularised by Madison Grant
Madison Grant
Madison Grant was an American lawyer, historian and physical anthropologist, known primarily for his work as a eugenicist and conservationist...
. The Alpine type was considered as a branch of the Balkans-Caucasian race
Balkans-Caucasian race
A Balkans-Caucasian race has been postulated as a subrace of the greater Caucasian race.- Racial types :In the Balkans-Caucasian race allocate set of discrete variants different in details, in particular:...
in Soviet era anthropology. 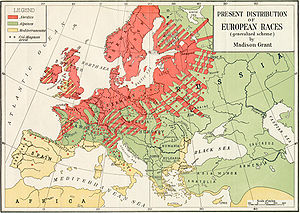 A distinctive Alpine type had been proposed by earlier writers, notably Vacher de Lapouge, but it was Ripley who promoted it to one of the main divisions.

Ripley argued that the Alpines had originated in Asia
Asia
Asia is the world's largest and most populous continent, located primarily in the eastern and northern hemispheres. It covers 8.7% of the Earth's total surface area and with approximately 3.879 billion people, it hosts 60% of the world's current human population...
, and had spread westwards along with the emergence and expansion of agriculture, which they established in Europe. By migrating into central Europe, they had separated the northern and southern branches of the earlier European stock, creating the conditions for the separate evolution of Nordics and Mediterraneans.

In Carleton Coon
Carleton Coon
Carleton Coon may refer to:*Carleton Coon, American jazz musician, co-founder of the Coon-Sanders Original Nighthawk Orchestra*Carleton S. Coon, American anthropologist...
's rewrite of Ripley's The Races of Europe, he developed the argument that they were reduced Upper Paleolithic
Upper Paleolithic
The Upper Paleolithic is the third and last subdivision of the Paleolithic or Old Stone Age as it is understood in Europe, Africa and Asia. Very broadly it dates to between 40,000 and 10,000 years ago, roughly coinciding with the appearance of behavioral modernity and before the advent of...
survivors indigenous to Europe. Coon argued that they were linked to their unreduced (Brünn, Borreby) counterparts.

Despite the large numbers of this alleged race, the characteristics of the Alpines were not as widely discussed and disputed as those of the Nordics and Mediterraneans. Typically they were portrayed as "sedentary": solid peasant stock, the reliable backbone of the European population, but not outstanding for qualities of leadership or creativity. Madison Grant
Madison Grant
Madison Grant was an American lawyer, historian and physical anthropologist, known primarily for his work as a eugenicist and conservationist...
, insisted on their "essentially peasant character".