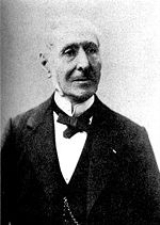 Encyclopedia
Alphonse Louis Pierre Pyrame de Candolle (Paris
Paris
Paris is the capital and largest city in France, situated on the river Seine, in northern France, at the heart of the Île-de-France region...
October 28, 1806 – Geneva
Geneva
Geneva In the national languages of Switzerland the city is known as Genf , Ginevra and Genevra is the second-most-populous city in Switzerland and is the most populous city of Romandie, the French-speaking part of Switzerland...
April 4, 1893), was a French-Swiss botanist, the son of the Swiss botanist A. P. de Candolle
A. P. de Candolle
Augustin Pyramus de Candolle also spelled Augustin Pyrame de Candolle was a Swiss botanist. René Louiche Desfontaines launched Candolle's botanical career by recommending him at an herbarium...
.

He first devoted himself to the study of law, but gradually drifted to botany and finally succeeded to his father's chair at the University of Geneva
University of Geneva
The University of Geneva is a public research university located in Geneva, Switzerland.It was founded in 1559 by John Calvin, as a theological seminary and law school. It remained focused on theology until the 17th century, when it became a center for Enlightenment scholarship. In 1873, it...
. He published a number of botanical works, including continuations of the Prodromus in collaboration with his son, Anne Casimir Pyrame de Candolle
Anne Casimir Pyrame de Candolle
Anne Casimir Pyrame de Candolle was a Swiss botanist, the son of Alphonse Pyrame de Candolle....
. Among his other contributions is the creation of the first Code of Botanical Nomenclature (adopted by the International Botanical Congress in 1867), being the prototype of the current ICBN. He was elected a foreign member of the Royal Swedish Academy of Sciences
Royal Swedish Academy of Sciences
The Royal Swedish Academy of Sciences or Kungliga Vetenskapsakademien is one of the Royal Academies of Sweden. The Academy is an independent, non-governmental scientific organization which acts to promote the sciences, primarily the natural sciences and mathematics.The Academy was founded on 2...
in 1859 and was awarded the Linnean Medal
Linnean Medal
The Linnean Medal of the Linnean Society of London was established in 1888, and is awarded annually to alternately a botanist or a zoologist or to one of each in the same year...
of the Linnean Society of London
Linnean Society of London
The Linnean Society of London is the world's premier society for the study and dissemination of taxonomy and natural history. It publishes a zoological journal, as well as botanical and biological journals...
in 1889.
He is also known for a study of the religious affiliations of foreign members of the French and British Academies of Science during the Scientific Revolution
Scientific revolution
The Scientific Revolution is an era associated primarily with the 16th and 17th centuries during which new ideas and knowledge in physics, astronomy, biology, medicine and chemistry transformed medieval and ancient views of nature and laid the foundations for modern science...
that demonstrated that in both academies Protestants were more heavily represented than Catholic
Catholic
The word catholic comes from the Greek phrase , meaning "on the whole," "according to the whole" or "in general", and is a combination of the Greek words meaning "about" and meaning "whole"...
s by comparison with catchment populations. This observation continues to be used (for example in David Landes' 1999 _Wealth and Poverty of Nations, cf. revised paperback edition, 177) as a demonstration that Protestants were more inclined to be scientifically active during the Scientific Revolution than Roman Catholics. This botanist is denoted by the author abbreviation A.DC. when citing
Author citation (botany)
In botanical nomenclature, author citation refers to citing the person who validly published a botanical name, i.e. who first published the name while fulfilling the formal requirements as specified by the International Code of Botanical Nomenclature...
a botanical name
Botanical name
A botanical name is a formal scientific name conforming to the International Code of Botanical Nomenclature and, if it concerns a plant cultigen, the additional cultivar and/or Group epithets must conform to the International Code of Nomenclature for Cultivated Plants...
.