Gabriel-Alphonse Desjardins (November 5, 1854 - October 31, 1920), born in Lévis, Quebec
Lévis, Quebec
Lévis is a city in eastern Quebec, Canada. It is located on the south shore of the St. Lawrence River, opposite Quebec City. A ferry links Old Quebec with Old Lévis, and two bridges, the Quebec Bridge and the Pierre Laporte Bridge, connect western Lévis with Quebec City. The Société de transport de...
, was the co-founder of the Caisses Populaires Desjardins (today Desjardins Group), a forerunner of North American credit unions and community banks.

Gabriel-Alphonse Desjardins was a journalist at L'écho
L'Echo
L'Echo is a Belgian newspaper, published by Mediafin and mainly distributed in Wallonia and Brussels. It is the French counterpart of the Flemish daily De Tijd....
and Le Canadien
Le Canadien
Le Canadien was a French language newspaper published in Lower Canada from November 22, 1806 to March 14, 1810. Its motto was: "Nos institutions, notre langue et nos droits"...
until 1879. He was publisher of Débats de la législature du Québec from 1879 to 1890, and French-language parliamentary stenographer at the House of Commons
Canadian House of Commons
The House of Commons of Canada is a component of the Parliament of Canada, along with the Sovereign and the Senate. The House of Commons is a democratically elected body, consisting of 308 members known as Members of Parliament...
from 1892 to 1917.


The beginnings of Caisses populaires 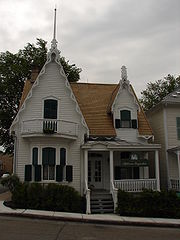 In 1897 Desjardins became increasingly concerned with the problem of usury
Usury
Usury Originally, when the charging of interest was still banned by Christian churches, usury simply meant the charging of interest at any rate . In countries where the charging of interest became acceptable, the term came to be used for interest above the rate allowed by law...
and undertook three years of careful research and correspondence with the founders of cooperative savings and credit movements in Europe. On December 6, 1900 Desjardins and his wife, Dorimène Roy Desjardins
Dorimène Roy Desjardins
Marie-Clara Dorimène Roy Desjardins and her husband Alphonse Desjardins were co-founders of the Caisses populaires Desjardins , a forerunner of North American credit unions. She was appointed honorary member of the Union régionale des caisses populaires Desjardins de Québec in 1923.-References:...
, co-founded the first Caisse d'épargne Desjardins in Lévis and opened for business the following month. Later renamed Caisses populaires Desjardins (and today Desjardins Group), the organization was a forerunner of current North America
North America
North America is a continent wholly within the Northern Hemisphere and almost wholly within the Western Hemisphere. It is also considered a northern subcontinent of the Americas...
n credit union
Credit union
A credit union is a cooperative financial institution that is owned and controlled by its members and operated for the purpose of promoting thrift, providing credit at competitive rates, and providing other financial services to its members...
s.

Caisse populaire is a synthesis of four popular savings and credit systems established in Germany, Italy and France: the caisse d'épargne, the Schulze-Delitzsch
Franz Hermann Schulze-Delitzsch
Franz Hermann Schulze-Delitzsch was a German economist. He was responsible for the organizing of the world's first credit unions.-History:Schulze-Delitzsch was born at Delitzsch, in Prussian Saxony...
bank, the Raiffeisen
Friedrich Wilhelm Raiffeisen
Friedrich Wilhelm Raiffeisen was a German mayor and cooperative pioneer. Several credit union systems and cooperative banks have been named after Raiffeisen, who pioneered rural credit unions.- Life :...
credit co-operative and the Luzzatti popular bank. Desjardins stayed in close contact with many of the founders of the European co-operative movement throughout his life.

From 1900 to 1906, Desjardins founded just three other caisses populaires: Lauzon
Lauzon, Quebec
Lauzon is a former city in southern Quebec, Canada, located on the St. Lawrence River northeast of Lévis. Founded in 1910, Lauzon had a population of about 14,500 when it merged with Lévis in 1989...
(1902), Hull
Hull, Quebec
Hull is the central and oldest part of the city of Gatineau, Quebec, Canada. It is located on the west bank of the Gatineau River and the north shore of the Ottawa River, directly opposite Ottawa. As part of the Canadian National Capital Region, it contains offices for twenty thousand...
(1903), and Saint-Malo
Saint-Malo, Quebec
Saint-Malo is a municipality which has the highest elevation in Quebec. At 640 metres, local residents live in an environment of forests, farms, and waterways that supply their livelihood. Every September, they revive the traditions of their ancestors with a Harvest Festival that includes a...
, Québec
Quebec
Quebec or is a province in east-central Canada. It is the only Canadian province with a predominantly French-speaking population and the only one whose sole official language is French at the provincial level....
(1905). After failing to get a federal law passed in Ottawa
Ottawa
Ottawa is the capital of Canada, the second largest city in the Province of Ontario, and the fourth largest city in the country. The city is located on the south bank of the Ottawa River in the eastern portion of Southern Ontario...
that would provide a Canadian-wide framework for more such organizations, Desjardins turned his efforts, with the collaboration of journalists and priests, to founding more caisses. During the 1907-1914 period, Desjardins personally founded 146 caisses.

At the time of his death in 1920, there were 187 caisses populaires in Québec
Quebec
Quebec or is a province in east-central Canada. It is the only Canadian province with a predominantly French-speaking population and the only one whose sole official language is French at the provincial level....
(30,000 members and total assets of nearly $6 million), 24 in Ontario
Ontario
Ontario is a province of Canada, located in east-central Canada. It is Canada's most populous province and second largest in total area. It is home to the nation's most populous city, Toronto, and the nation's capital, Ottawa....
and 9 in the United States
United States
The United States of America is a federal constitutional republic comprising fifty states and a federal district...
.

Alphonse and Dorimène Desjardins' home, where the first caisse populaire was launched, is now a center dedicated to his memory and has been visited by over 178,000 people from 115 countries since its opening in 1982.