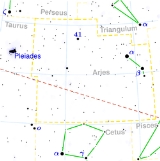 α Arietis has spectral type K2 IIICa-1, which means that it is a K-type giant star
Giant star
A giant star is a star with substantially larger radius and luminosity than a main sequence star of the same surface temperature. Typically, giant stars have radii between 10 and 100 solar radii and luminosities between 10 and 1,000 times that of the Sun. Stars still more luminous than giants are...
, slightly cooler than the Sun
Sun
The Sun is the star at the center of the Solar System. It is almost perfectly spherical and consists of hot plasma interwoven with magnetic fields...
and much larger. The Ca portion of the spectral type indicates that it shows calcium
Calcium
Calcium is the chemical element with the symbol Ca and atomic number 20. It has an atomic mass of 40.078 amu. Calcium is a soft gray alkaline earth metal, and is the fifth-most-abundant element by mass in the Earth's crust...
lines in its spectrum
Electromagnetic spectrum
The electromagnetic spectrum is the range of all possible frequencies of electromagnetic radiation. The "electromagnetic spectrum" of an object is the characteristic distribution of electromagnetic radiation emitted or absorbed by that particular object....
.