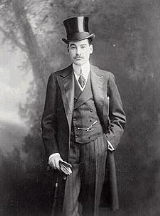 Encyclopedia
Alfred Gwynne Vanderbilt I (October 20, 1877 – May 7, 1915) was an extremely wealthy sportsman and a member of the famous Vanderbilt family of philanthropists. He died on the .

Born in New York City
New York City
New York is the most populous city in the United States and the center of the New York Metropolitan Area, one of the most populous metropolitan areas in the world. New York exerts a significant impact upon global commerce, finance, media, art, fashion, research, technology, education, and...
, the third son of Cornelius Vanderbilt II
Cornelius Vanderbilt II
Cornelius Vanderbilt II was an American socialite, heir, businessman, and a member of the prominent United States Vanderbilt family....
(1843–1899) and Alice Claypoole Gwynne
Alice Claypoole Gwynne
Alice Claypoole Gwynne Vanderbilt was the wife of Cornelius Vanderbilt II and reigned as the dowager Mrs. Vanderbilt for over 60 years.-Biography:...
(1845–1934), Alfred Gwynne Vanderbilt was educated at St. Paul's School in Concord
Concord, New Hampshire
The city of Concord is the capital of the state of New Hampshire in the United States. It is also the county seat of Merrimack County. As of the 2010 census, its population was 42,695....
, New Hampshire
New Hampshire
New Hampshire is a state in the New England region of the northeastern United States of America. The state was named after the southern English county of Hampshire. It is bordered by Massachusetts to the south, Vermont to the west, Maine and the Atlantic Ocean to the east, and the Canadian...
, and at Yale University
Yale University
Yale University is a private, Ivy League university located in New Haven, Connecticut, United States. Founded in 1701 in the Colony of Connecticut, the university is the third-oldest institution of higher education in the United States...
(Class of 1899), where he was a member of Skull and Bones
Skull and Bones
Skull and Bones is an undergraduate senior or secret society at Yale University, New Haven, Connecticut. It is a traditional peer society to Scroll and Key and Wolf's Head, as the three senior class 'landed societies' at Yale....
.

Soon after his return to New York, Vanderbilt began working as a clerk in the offices of the New York Central Railroad
New York Central Railroad
The New York Central Railroad , known simply as the New York Central in its publicity, was a railroad operating in the Northeastern United States...
, as preparation for entering into the councils of the company as one of its principal owners. Subsequently, he was chosen a director in other companies as well, among them the Fulton Chain Railway Company, Fulton Navigation Company, Raquette Lake Railway Company, Raquette Lake Transportation Company, and the Plaza Bank of New York. Vanderbilt was a good judge of real estate values and projected several important enterprises. On the site of the former residence of the Vanderbilt family, and including, also, several adjacent plots, he built the Vanderbilt Hotel at Park Avenue and 34th Street, New York, which he made his city home.

A scandal erupted in April 1908 after Elsie filed for divorce, alleging adultery with Agnes O'Brien Ruíz, the wife of the Cuba
Cuba
The Republic of Cuba is an island nation in the Caribbean. The nation of Cuba consists of the main island of Cuba, the Isla de la Juventud, and several archipelagos. Havana is the largest city in Cuba and the country's capital. Santiago de Cuba is the second largest city...
n attaché in Washington, D. C.. The publicity ultimately led Agnes Ruíz to commit suicide
Suicide
Suicide is the act of intentionally causing one's own death. Suicide is often committed out of despair or attributed to some underlying mental disorder, such as depression, bipolar disorder, schizophrenia, alcoholism, or drug abuse...
in 1909.

Elsie French Vanderbilt remarried to Lieutenant Paul Fitzsimons, U.S.N., on April 3, 1919 in Newport
Newport, Rhode Island
Newport is a city on Aquidneck Island in Newport County, Rhode Island, United States, about south of Providence. Known as a New England summer resort and for the famous Newport Mansions, it is the home of Salve Regina University and Naval Station Newport which houses the United States Naval War...
, Rhode Island
Rhode Island
The state of Rhode Island and Providence Plantations, more commonly referred to as Rhode Island , is a state in the New England region of the United States. It is the smallest U.S. state by area...
. He was a marine officer ten years her junior and he served on the same destroyer as Elsie's son William H. Vanderbilt. She died in Newport on February 27, 1948.

Vanderbilt spent considerable time in London
London
London is the capital city of :England and the :United Kingdom, the largest metropolitan area in the United Kingdom, and the largest urban zone in the European Union by most measures. Located on the River Thames, London has been a major settlement for two millennia, its history going back to its...
after the divorce and remarried there on December 17, 1911 to the wealthy American divorcée Margaret Emerson (1884–1960). She was the daughter of wealthy instructor in chemistry and drug manufacturer Captain Isaac Edward Emerson (1859–1937) and his first wife Emily Askew. She was heiress to the Bromo-Seltzer
Bromo-Seltzer
Bromo-Seltzer , is an antacid used to relieve pain occurring together with heartburn, upset stomach, or acid indigestion. Originally produced by inventor Isaac E...
fortune. Margaret had been married from 1902-1910 to Dr. Smith Hollins McKim, a wealthy physician of Baltimore
Baltimore
Baltimore is the largest independent city in the United States and the largest city and cultural center of the US state of Maryland. The city is located in central Maryland along the tidal portion of the Patapsco River, an arm of the Chesapeake Bay. Baltimore is sometimes referred to as Baltimore...
, Maryland
Maryland
Maryland is a U.S. state located in the Mid Atlantic region of the United States, bordering Virginia, West Virginia, and the District of Columbia to its south and west; Pennsylvania to its north; and Delaware to its east...
.

Vanderbilt was a sportsman, and he particularly enjoyed fox hunting and coaching. In the late 19th century, he and a number of other millionaires, such as James Hazen Hyde
James Hazen Hyde
James Hazen Hyde was the son of Henry Baldwin Hyde, the founder of The Equitable Life Assurance Society of the United States. James Hazen Hyde was twenty-three when he inherited the majority shares in the billion-dollar Equitable Life Assurance Society in 1899...
practiced the old English coaching techniques of the early 19th century. Meeting near Holland House
Holland House
Holland House, originally known as Cope Castle, was one of the first great houses built in Kensington in London, and is situated in Holland Park.- Origins, in the Civil War, and beyond :Holland House was built in 1605 for Sir Walter Cope...
in New York City, the coaching group would take their vehicle for a one, two, or more day trip along chosen routes through several states, going to prearranged inns and hotels along the routes. Vanderbilt would frequently drive the coach, in perfectly apparelled suit as a coachman or groom. He also enjoyed fox hunting, and in the spring of 1915 was headed for England to purchase hunting dogs and horses.

On May 1, 1915, Alfred Vanderbilt boarded the bound for Liverpool as a first class passenger. It was a business trip, and he traveled with only his valet, leaving his family at home in New York. On May 7 off the coast of County Cork, Ireland
Ireland
Ireland is an island to the northwest of continental Europe. It is the third-largest island in Europe and the twentieth-largest island on Earth...
, the German
Germany
Germany , officially the Federal Republic of Germany , is a federal parliamentary republic in Europe. The country consists of 16 states while the capital and largest city is Berlin. Germany covers an area of 357,021 km2 and has a largely temperate seasonal climate...
submarine
U-boat
U-boat is the anglicized version of the German word U-Boot , itself an abbreviation of Unterseeboot , and refers to military submarines operated by Germany, particularly in World War I and World War II...
, U-20 torpedoed the ship, triggering a secondary explosion that sank the giant ocean liner within 18 minutes. Vanderbilt and his valet, Ronald Denyer, helped others into lifeboats, and then Vanderbilt gave his lifejacket to save a female passenger. Vanderbilt had promised the young mother of a small baby that he would locate an extra lifevest for her. Failing to do so, he offered her his own life vest, which he proceeded to even tie on to her himself since she was holding her infant child in her arms at the time. Many consider his actions to be very brave and gallant since he could not swim, he knew that there were no other lifevests or lifeboats available, and yet he still gave away his only chance to survive to the young mother and child.

Because of his fame, several people on the Lusitania who survived the tragedy were observing him while events unfolded at the time and so they took note of his brave actions. He and Denyer were among the 1198 passengers who did not survive the incident. His body was never recovered.

A memorial was erected on the A24 London to Worthing Road in Holmwood
Holmwood
Holmwood is a civil parish in Surrey, England. The parish has a population of 850.Holmwood forms part of Mole Valley Borough Council's area; the main settlements are North Holmwood and South Holmwood both of which are bypassed by the A24 road. The smaller settlement of Mid Holmwood is alongside the...
, just south of Dorking
Dorking
Dorking is a historic market town at the foot of the North Downs approximately south of London, in Surrey, England.- History and development :...
. The inscription reads, "In Memory of Alfred Gwynne Vanderbilt a gallant gentleman and a fine sportsman who perished in the Lusitania May 7th 1915. This stone is erected on his favourite road by a few of his British coaching friends and admirers".

Another memorial to Vanderbilt is in a small park on Broadway in Newport, Rhode Island where members of the Vanderbilt family spent their summers.

According to A. A. Hoehling and Mary Hoehling (in their study, The Last Voyage of the Lusitania) Vanderbilt's fate was ironic as three years earlier he had made a last minute decision not to return to the U.S. on .