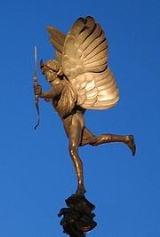 Overview
Sir Alfred Gilbert was an English
England
England is a country that is part of the United Kingdom. It shares land borders with Scotland to the north and Wales to the west; the Irish Sea is to the north west, the Celtic Sea to the south west, with the North Sea to the east and the English Channel to the south separating it from continental...
sculptor
Sculpture
Sculpture is three-dimensional artwork created by shaping or combining hard materials—typically stone such as marble—or metal, glass, or wood. Softer materials can also be used, such as clay, textiles, plastics, polymers and softer metals...
and goldsmith
Goldsmith
A goldsmith is a metalworker who specializes in working with gold and other precious metals. Since ancient times the techniques of a goldsmith have evolved very little in order to produce items of jewelry of quality standards. In modern times actual goldsmiths are rare...
who enthusiastically experimented with metallurgical
Metallurgy
Metallurgy is a domain of materials science that studies the physical and chemical behavior of metallic elements, their intermetallic compounds, and their mixtures, which are called alloys. It is also the technology of metals: the way in which science is applied to their practical use...
innovations. He was a central — if idiosyncratic — participant in the New Sculpture
New Sculpture
The New Sculpture refers to a movement in late 19th-century British sculpture.The term "New Sculpture" was coined by the first historian of the movement, the critic Edmund Gosse, who wrote a four-part series for the Art Journal in 1894...
movement that invigorated sculpture in Britain at the end of the nineteenth century.
Alfred Gilbert's parents, Charlotte Cole and Alfred Gilbert, were musicians who lived at 13 Berners Street, London, where Alfred was born.

Did gilbert prod/ cast for pomeroy london cosmetics? iave a problem i cant find a artist for a cast

did gilbert make a cast for pomeroy cosmetics a cast of a dove?
More
x