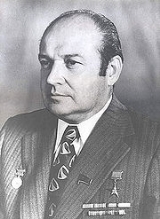 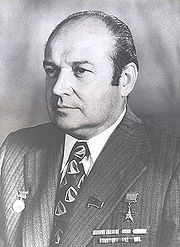 Alexei Andreyevich Tupolev was a Soviet
Soviet Union
The Soviet Union , officially the Union of Soviet Socialist Republics , was a constitutionally socialist state that existed in Eurasia between 1922 and 1991....
aircraft designer who led the development of the first supersonic
Supersonic
Supersonic speed is a rate of travel of an object that exceeds the speed of sound . For objects traveling in dry air of a temperature of 20 °C this speed is approximately 343 m/s, 1,125 ft/s, 768 mph or 1,235 km/h. Speeds greater than five times the speed of sound are often...
passenger jet, the failed Tupolev Tu-144
Tupolev Tu-144
The Tupolev Tu-144 was a Soviet supersonic transport aircraft and remains one of only two SSTs to enter commercial service, the other being the Concorde...
. He also helped design the Buran
Shuttle Buran
The Buran spacecraft , GRAU index 11F35 K1 was a Russian orbital vehicle analogous in function and design to the US Space Shuttle and developed by Chief Designer Gleb Lozino-Lozinskiy of Energia rocket corporation...
space shuttle and the Tu-2000, which has been suspended because of the lack of funds.

Tupolev was the son of famed Soviet aircraft pioneer, Andrei Tupolev
Andrei Tupolev
Andrei Nikolayevich Tupolev was a pioneering Soviet aircraft designer.During his career, he designed and oversaw the design of more than 100 types of aircraft, some of which set 78 world records...
. He graduated from the Moscow Aviation Institute
Moscow Aviation Institute
Moscow Aviation Institute is one of several major engineering higher education establishments in Moscow .Although the school is currently offering a wide range of majors and research...
in 1949 and began working with his father at the Tupolev Design Bureau. He became chief designer in 1963 and general designer in 1973.