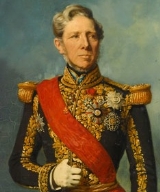 Encyclopedia
Alexandre Ferdinand Parseval-Deschenes (27 November 1790, Paris - 10 June 1860) was a French admiral and senator
French Senate
The Senate is the upper house of the Parliament of France, presided over by a president.The Senate enjoys less prominence than the lower house, the directly elected National Assembly; debates in the Senate tend to be less tense and generally enjoy less media coverage.-History:France's first...
.

Born into an aristocratic family, Alexandre was the nephew of the mathematician Marc-Antoine Parseval
Marc-Antoine Parseval
Marc-Antoine Parseval des Chênes was a French mathematician, most famous for what is now known as Parseval's theorem, which presaged the unitarity of the Fourier transform....
and the Académicien François-Auguste Parseval-Grandmaison
François-Auguste Parseval-Grandmaison
François-Auguste Parseval-Grandmaison was a French poet. He was the eleventh occupant of the Académie française seat 1 in 1811. He is buried in Pere-Lachaise Cemetery in Paris.- References :*...
. He volunteered for the Navy in 1804 and participated in the recapture of Fort Le Diamant
Le Diamant
Le Diamant is a town and commune in the French overseas department of Martinique.-External links:* *...
on Martinique
Martinique
Martinique is an island in the eastern Caribbean Sea, with a land area of . Like Guadeloupe, it is an overseas region of France, consisting of a single overseas department. To the northwest lies Dominica, to the south St Lucia, and to the southeast Barbados...
, then fought at Trafalgar
Battle of Trafalgar
The Battle of Trafalgar was a sea battle fought between the British Royal Navy and the combined fleets of the French Navy and Spanish Navy, during the War of the Third Coalition of the Napoleonic Wars ....
as an aspirant
Aspirant
Aspirant is a military rank in the Canadian Navy, French military, Brazilian military, Romanian Navy and Polish Police.-Canadian Navy:Similar to the French usage, the Canadian Navy uses the French-language rank of "Aspirant de marine" to denote a junior officer under training. The same rank in the...
on board Bucentaure
French ship Bucentaure (1804)
Bucentaure was a 80-gun ship of the line of the French Navy, lead ship of her class. She was the flagship of Vice-Admiral Latouche Tréville, who died on board on 18 August 1804....
, the admiral's flagship. As an enseigne de vaisseau, Parseval-Deschenes participated in the 1815 hydrographic investigations of Brittany
Brittany
Brittany is a cultural and administrative region in the north-west of France. Previously a kingdom and then a duchy, Brittany was united to the Kingdom of France in 1532 as a province. Brittany has also been referred to as Less, Lesser or Little Britain...
. In 1817 he took part in the expedition that retook Guyana for France, then commanded the French naval station in that colony for two years.

In 1822, as lieutenant de vaisseau, Alexandre was awarded the Légion d'honneur
Légion d'honneur
The Legion of Honour, or in full the National Order of the Legion of Honour is a French order established by Napoleon Bonaparte, First Consul of the Consulat which succeeded to the First Republic, on 19 May 1802...
for successfully rescuing the crew of the frigate Africaine
French ship Africaine
Five ships of the French Navy have carried the name Africaine:* Africaine, a felucca * Africaine, a Preneuse class frigate * Africaine , a 40-gun frigate...
, shipwrecked on the Newfoundland coast. He then commanded the frigate Iphigénie in the Mexico expedition
Pastry War
The Pastry War was an invasion of Mexico by French forces in 1838.-Background:The war arose from the widespread civil disorder that plagued the early years of the Mexican republic. In 1828, President Manuel Gómez Pedraza ejected Lorenzo de Zavala from the office of governor of the state of México...
participating in the blockade of Veracruz and bombardment of San Juan de Ulúa
Battle of San Juan de Ulúa (1838)
The Battle of Veracruz, or the Battle of San Juan de Ulua, was a naval attack of the Pastry War in which French naval forces captured the citadel of San Juan de Ulúa and then occupied the city of Veracruz. Mexican forces were heavily outnumbered and retreated...
in 1838, then the occupation of Argentine island of Martin-Garcia
Isla Martín García
Isla Martín García is an Argentine island off the Río de la Plata coast of Uruguay. The enclave island is within the boundaries of Uruguayan waters; in 1973 both countries reached an agreement establishing Martín García as an Argentine territory and also as a nature reserve.The island of has a...
in 1839.

Promoted to contre-amiral on 30 April 1840, Alexandre then served as major-general of the navy at Toulon
Toulon
Toulon is a town in southern France and a large military harbor on the Mediterranean coast, with a major French naval base. Located in the Provence-Alpes-Côte-d'Azur region, Toulon is the capital of the Var department in the former province of Provence....
, then Maritime Prefect at Cherbourg, before commanding the training squadron in the Mediterranean. He then rose to vice admiral on 15 July 1846, he next served as Maritime Prefect at Toulon then once again commander of the Mediterranean training squadron. He entered the Conseil de l'amirauté in 1851 and presided over the Conseil des travaux de la Marine. He was made a senator by Napoleon III on 26 November 1852. He the commanded France's Baltic fleet during the Crimean War
Crimean War
The Crimean War was a conflict fought between the Russian Empire and an alliance of the French Empire, the British Empire, the Ottoman Empire, and the Kingdom of Sardinia. The war was part of a long-running contest between the major European powers for influence over territories of the declining...
, with which he bombarded the Russian fortress of Bomarsund
Bomarsund
Bomarsund may refer to:*Bomarsund, Åland, fortress in the Åland Islands, in the Baltic Sea*Bomarsund, Northumberland, village in Northumberland, England...
and received its surrender on 16 August - as a reward he was promoted to admiral on the following 2 December. Admiral Parseval-Deschenes is buried at the Cimetière du Père-Lachaise and a late 19th century aviso
Aviso
An aviso , a kind of dispatch boat or advice boat, survives particularly in the French navy, they are considered equivalent to the modern sloop....
in the French Navy
French Navy
The French Navy, officially the Marine nationale and often called La Royale is the maritime arm of the French military. It includes a full range of fighting vessels, from patrol boats to a nuclear powered aircraft carrier and 10 nuclear-powered submarines, four of which are capable of launching...
(launched in 1879 and decommissioned in 1898) was named after him.