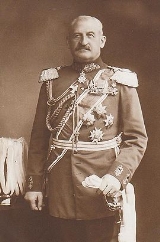 Encyclopedia
Alexander Adolf August Karl von Linsingen (1850–1935) was one of the best German
Germany
Germany , officially the Federal Republic of Germany , is a federal parliamentary republic in Europe. The country consists of 16 states while the capital and largest city is Berlin. Germany covers an area of 357,021 km2 and has a largely temperate seasonal climate...
field commanders during World War I
World War I
World War I , which was predominantly called the World War or the Great War from its occurrence until 1939, and the First World War or World War I thereafter, was a major war centred in Europe that began on 28 July 1914 and lasted until 11 November 1918...
.

Linsingen joined the Prussian Army
Prussian Army
The Royal Prussian Army was the army of the Kingdom of Prussia. It was vital to the development of Brandenburg-Prussia as a European power.The Prussian Army had its roots in the meager mercenary forces of Brandenburg during the Thirty Years' War...
in 1868 and rose to Corps Commander in 1909. He was one of the very few top German generals not to have served on the general staff.

At the beginning of World War I, Linsingen was a Corps commander in the First Battle of the Marne
First Battle of the Marne
The Battle of the Marne was a First World War battle fought between 5 and 12 September 1914. It resulted in an Allied victory against the German Army under Chief of Staff Helmuth von Moltke the Younger. The battle effectively ended the month long German offensive that opened the war and had...
. Transferred to the Eastern Front where German and Austrian armies were threatened by a Russian offensive in Galicia, Linsingen took command of Army Group South (1915). He defeated the Russian armies in the Battle of Stryi in 1915, capturing 60,000 Russian prisoners. He was awarded the Pour le Mérite
Pour le Mérite
The Pour le Mérite, known informally as the Blue Max , was the Kingdom of Prussia's highest military order for German soldiers until the end of World War I....
. In 1916 he faced the Brusilov offensive
Brusilov Offensive
The Brusilov Offensive , also known as the June Advance, was the Russian Empire's greatest feat of arms during World War I, and among the most lethal battles in world history. Prof. Graydon A. Tunstall of the University of South Florida called the Brusilov Offensive of 1916 the worst crisis of...
. After an initial retreat, he checked the Russian advance at the Battle of Kowel
Battle of Kowel
The Battle of Kowel took place during World War I, from 24 July to 8 August 1916. It began with an Austrian counter-attack by Alexander von Linsingen south of Kowel, a city located in the Volyn Oblast , in north-western Ukraine...
. He was promoted to Colonel-General, the highest rank for a general in the German Army. In 1917-1918 he led the German offense into the Ukraine
Ukraine
Ukraine is a country in Eastern Europe. It has an area of 603,628 km², making it the second largest contiguous country on the European continent, after Russia...
. After the end of the war with Russia, he became the Military Governor of Berlin
Berlin
Berlin is the capital city of Germany and is one of the 16 states of Germany. With a population of 3.45 million people, Berlin is Germany's largest city. It is the second most populous city proper and the seventh most populous urban area in the European Union...
(1918). Alexander von Linsingen died on 5 June 1935 and is interned at the Neuen St. Nikolai-Friedhof in Hannover, Germany.