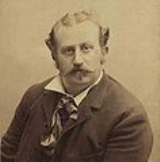 Encyclopedia
Alexander Lange Kielland (ɑlɛksɑndər ˈlɑŋːə ˈçɛlːɑn) (18 February 1849 – 6 April 1906) was one of the most famous Norwegian
Norway
Norway , officially the Kingdom of Norway, is a Nordic unitary constitutional monarchy whose territory comprises the western portion of the Scandinavian Peninsula, Jan Mayen, and the Arctic archipelago of Svalbard and Bouvet Island. Norway has a total area of and a population of about 4.9 million...
realistic
Literary realism
Literary realism most often refers to the trend, beginning with certain works of nineteenth-century French literature and extending to late-nineteenth- and early-twentieth-century authors in various countries, towards depictions of contemporary life and society "as they were." In the spirit of...
writers of the 19th century. He is one of the so-called "The Four Greats
The Four Greats
The Four Greats is a term used for four of the most influential Norwegian writers of the late 19th century, namely Bjørnstjerne Bjørnson, Henrik Ibsen, Alexander Kielland and Jonas Lie. The term was introduced by their publisher, Gyldendal, for advertising purposes...
" in Norwegian literature
Norwegian literature
Norwegian literature is literature composed in Norway or by Norwegian people. The history of Norwegian literature starts with the pagan Eddaic poems and skaldic verse of the 9th and 10th centuries with poets such as Bragi Boddason and Eyvindr Skáldaspillir...
, along with Henrik Ibsen
Henrik Ibsen
Henrik Ibsen was a major 19th-century Norwegian playwright, theatre director, and poet. He is often referred to as "the father of prose drama" and is one of the founders of Modernism in the theatre...
, Bjørnstjerne Bjørnson
Bjørnstjerne Bjørnson
Bjørnstjerne Martinius Bjørnson was a Norwegian writer and the 1903 Nobel Prize in Literature laureate. Bjørnson is considered as one of The Four Greats Norwegian writers; the others being Henrik Ibsen, Jonas Lie, and Alexander Kielland...
and Jonas Lie
Jonas Lie
Jonas Lauritz Idemil Lie was a Norwegian novelist, poet, and playwright who is considered to have been one of the Four Greats of 19th century Norwegian literature, together with Henrik Ibsen, Bjørnstjerne Bjørnson and Alexander Kielland.-Background:Jonas Lie was born at Hokksund in Øvre Eiker, in...
.

Born in Stavanger
Stavanger
Stavanger is a city and municipality in the county of Rogaland, Norway.Stavanger municipality has a population of 126,469. There are 197,852 people living in the Stavanger conurbation, making Stavanger the fourth largest city, but the third largest urban area, in Norway...
, Norway
Norway
Norway , officially the Kingdom of Norway, is a Nordic unitary constitutional monarchy whose territory comprises the western portion of the Scandinavian Peninsula, Jan Mayen, and the Arctic archipelago of Svalbard and Bouvet Island. Norway has a total area of and a population of about 4.9 million...
, he grew up in a rich merchant family. He was the son of Consul Jens Zetlitz Kielland
Jens Zetlitz Kielland
Jens Zetlitz Kielland was a Norwegian consul and artist. He is known as the father of novelist Alexander Kielland.He was born in Stavanger to Jacob Kielland and Axeliane Christine , née Zetlitz. His grandfather was Gabriel Schanche Kielland, his uncle Jonas Schanche Kielland. He had four brothers...
and great-grandson of Gabriel Schanche Kielland
Gabriel Schanche Kielland
Gabriel Schanche Kielland was a Norwegian businessman and ship owner. He managed the Stavanger company Jacob Kielland & Søn from 1790, and became one of the most wealthy and prominent persons in the city. He let construct the large country house Ledaal around 1800, which has later become a royal...
(1760–1821). Kielland was the younger brother of Norwegian landscape painter Kitty Lange Kielland
Kitty Lange Kielland
-Early life and training:Kielland was born to an affluent family in Stavanger, the older sister of Alexander Kielland. Kielland's mutual interactions with her brother would be important to shaping her as an artist. Although she received some training in drawing and painting, it was not until she...
, and their mutual interactions were important to shaping both as artists.

His family also included his son, Jens Zetlitz Kielland, (1873–1926); uncle Jacob Otto Lange
Jacob Otto Lange
Jacob Lange was the Norwegian member of the Council of State Division in Stockholm 1891-1892, and Minister of Auditing 1892-1893....
(1833–1902), cousin Axel Christian Zetlitz Kielland
Axel Christian Zetlitz Kielland
Axel Christian Zetlitz Kielland was a Norwegian civil servant and diplomat.-Personal life:He was born in Stavanger to Jacob Kielland and Thora Margrethe , née Bendz. His grandfather was Jacob Kielland, his uncle Jens Zetlitz Kielland and his cousins Kitty Lange and Alexander Kielland...
(1853–1924), nephew Jens Zetlitz Monrad Kielland (1866–1926), cousin Anders Lange
Anders Lange
Anders Sigurd Lange was a Norwegian politician and the eponymous founder of the political party Anders Lange's Party . He was a charismatic right-wing public speaker who objected to high taxes, state-regulations and public bureaucracy.Lange has been described as a man who went his own ways...
(1904–1974) and great nephew Jacob Christie Kielland
Jacob Christie Kielland
-Personal life:He was born in Bergen to architect Jens Zetlitz Monrad Kielland and his wife Anna Magdalena Cathrine , née Christie. His grandfather was priest and politician Jacob Kielland, and through him, Jacob Christie Kielland was the grandnephew of painter Kitty Lange Kielland and novelist...
(1897–1972). His great niece Axeliane Christiane Zetlitz Kielland (1916–1995) married Agnar Mykle
Agnar Mykle
Agnar Mykle was a Norwegian author. He became one of the most controversial figures in Norwegian literature in the 20th century.-Early life:...
(1915–1994).

Despite being born into wealth, he had a sincere affection for the less fortunate, treating his workers well when he was a factory owner. He remained a spokesman for the weak and a critic of society throughout his time as a writer. His best known plays were the satirical comedies Tre Par (1886) and Professoren (1888). He was also well known for his short stories.

It has been debated why Kielland ended his career as a writer so early. Some believe that he was so much of a realist that he could not deal with new-romantic tendencies in Norwegian literature at the end of the 19th century. A more probable reason is that he chose to focus on his political career. The biography of Alexander L. Kielland by Tor Obrestad
Tor Obrestad
Tor Obrestad is a Norwegian novelist, poet and documentary writer. He made his literary debut in 1966 with two books, the poetry collection Kollisjon and a collection of short stories, Vind, and received Tarjei Vesaas' debutantpris for these two books...
opens up thoughts about Kielland dying from obesity. Already from the mid-1880s, Kielland had suffered from shortness of breath, and he could not put his full energy into writing. He had several heart-attacks, he constantly gained weight and he couldn't control his great passion for food.

From 1889 to 1890, Kielland worked as a journalist at Stavanger Avis
Stavanger Avis
Stavanger Avis was a Norwegian newspaper, published in Stavanger in Rogaland county. Its allegiance was Liberal.Stavanger Avis was started in 1888 as Rogalands Folkeblad, its name changed in 1889. The first editors were Oddmund Vik and Alexander Kielland. In 1899 the newspaper absorbed a...
. Kielland virtually stopped writing fiction in 1891 and published only stories which had appeared earlier. In 1891 he was designated the mayor
Mayor
In many countries, a Mayor is the highest ranking officer in the municipal government of a town or a large urban city....
of his hometown, Stavanger
Stavanger
Stavanger is a city and municipality in the county of Rogaland, Norway.Stavanger municipality has a population of 126,469. There are 197,852 people living in the Stavanger conurbation, making Stavanger the fourth largest city, but the third largest urban area, in Norway...
, until in 1902 he moved on to Molde
Molde
is a city and municipality in Møre og Romsdal county, Norway. It is part of the Romsdal region. The municipality is located on the Romsdal Peninsula, surrounding the Fannefjord and Moldefjord...
as county governor
County governor
A county governor is the leader of a county, the first-level administrative unit of Lithuania. County governors are chosen by the Prime Minister and confirmed by the central government rather than elected by the people...
of Møre og Romsdal
Møre og Romsdal
is a county in the northernmost part of Western Norway. It borders the counties of Sør-Trøndelag, Oppland and Sogn og Fjordane. The county administration is located in Molde, while Ålesund is the largest city.-The name:...
.